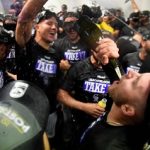 As the Colorado Rockies prepared for last Saturday night’s game against the Los Angeles Dodgers, all eyes were on the clubhouse television. The screen showed the Milwaukee Brewers with a comfortable 6-0 lead over the St. Louis Cardinals, which would most likely mean that the Rockies would have to win one more game to clinch their first playoff appearance since 2009. Clayton Kershaw was scheduled to pitch for the Dodgers, and the odds were not looking good. But in an improbable season came an improbable ending as the St. Louis Cardinals rallied to score three runs in the eighth to defeat the... Read More