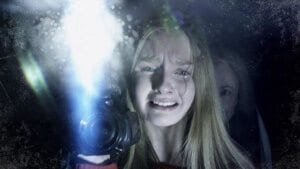 There’s a few things that kids know, deep down on a molecular level.

Coming from someone who hopes to live long enough to be old, creepy, and weird, I know it’s an unfair generalization. It’s also completely true. Fear of the elderly can be pretty standard with kids, and I can’t blame them. Look at it from their perspective. The elderly can smell funky. They don’t dress in a way that you’re used to. Their behavior, sometimes? Hoo boy, that’s the worst. Sometimes they forget little things. Sometimes they forget who you are. Sometimes they go from being sweet as pie to straight up terrifying. M. Night Shyamalan knows this, and he’s made The Visit, an effective (and hilarious) horror movie about it.

For a while there, our old pal Night was looking like he was going to join the ranks of the greatest directors of pure entertainment. The Sixth Sense is a slow burn, effective and chilling. Unbreakable, while a little too solemn, is a solid real world superhero origin. And as conceptually dumb as Signs is, it’s still a lot of fun with entertaining performances by Mel Gibson and Joaquin Phoenix. But then it seems hubris got the best of Shyamalan. The Village was clumsy and too clever by half. Lady In The Water was foolish and pretentious. The film that seemed to drive a stake through the heart of his career was The Happening, a film so phantasmagorically bad that it could only have been made by someone talented. He bounced around Hollywood for a few years, making films that nobody cared about. I hesitate to call The Visit his comeback, but it’s definitely a step in the right direction.

We meet Mom (the great Kathryn Hahn), talking to the camera. She tells us about running away from home at 19, a falling out with her parents. Years later, her parents have reached out and want a reconciliation. Mom is scheduled to go on a cruise with her boyfriend, but she arranges for her daughter Becca (Olivia DeJonge) and son Tyler (Ed Oxenbould) to spend a week getting to know their grandparents at their isolated Pennsylvania farm.

Becca is an aspiring filmmaker, and she decides she’ll film the entire visit as a documentary. She’s a sharp kid, throwing around terms like mise-en-scene* and worrying about her shot composition. The conceit isn’t bad, since The Visit is yet another found footage movie.** Does the film require the first person, shakycam aesthetic? Nah, not really, but there’s an emotional component that I like, since Becca wants to use the documentary as a means of reconnection between her mother and her grandparents.

Her younger brother Tyler is an amateur rapper and professional goofball. He initially ends all of his freestyles by yelling, “HO!” But in an attempt at sensitivity, he also decides to substitute profanity for the names of pop stars. During a scene of high tension, Tyler whispers, “Katy Perry,” and I just screeched with laughter.

The kids meet Nana (Deanna Dunagan) and Pop Pop (Peter McRobbie). There is something wrong with them. But what? Pop Pop tells the kids that bedtime is 9:30 at night, and not to leave their room. Of course they do, and they find Nana scratching the walls, sprinting through the house, making strange growling noises. Then things get weird.

By now, this being an M. Night Shyamalan joint, you’re probably wondering if there’s a twist ending. Yes and no. It’s not so much that there’s a twist as there is a reveal that ramps things up. We’re not in Twilight Zone territory, and that suits me just fine. In fact, Shyamalan hasn’t made a movie like this in years. Instead of things being ponderous and slow-moving, The Visit has zippy pacing and feels loose. Even in the third act, when some genuinely unsettling stuff goes down, there’s still a lot of humor.

I give big credit to the performances of Dunegan and McRobbie as the unstable grandparents. On the one hand, they just absolutely go for it, playing their roles to the max. Dunegan is particularly strong, since given Nana’s shifting mental state, she often seems like a different person from scene to scene. Their characters aren’t terribly grounded, but since the point of the film is how strange the elderly can be, it’s really not a deal breaker.

Oxenbould and DeJonge also do good work. Often, it seems like most screenwriters don’t know how to write kids correctly. They miss the intelligence mixed in with the immaturity, and they rarely get the strange bond of siblings that combines love with cruelty. As a result, movie kids tend to be highly annoying. Not so here, and the combination of Shyamalan’s strong script and direction provides them with characters that have big personalities.

We all know that comedy and horror are close to each other, so much so that screams can quickly transform into laughter. Shyamalan remembers this and, along with the improvisational nature of his child leads, has made a movie that’s an absolute blast. There’s only a couple of cheap jump scares, but they don’t interfere with the constant buildup of tension. I learned a while back not to root for someone to fail,*** and I’m genuinely hoping that Shyamalan’s career is on an upwards trajectory.

*A French term referring to the arrangement of everything that appears before the camera, like props, sets and actors.

**I ordinarily despise the found footage genre, and I think The Blair Witch Project, Cloverfield, and Chronicle were the only films that really utilized the concept correctly.

***Except for Adam Sandler, because screw that guy.

Tim Brennan
Tim has been alarmingly enthusiastic about movies ever since childhood. He grew up in Boulder and, foolishly, left Colorado to study Communications in Washington State. Making matters worse, he moved to Connecticut after meeting his too-good-for-him wife. Drawn by the Rockies and a mild climate, he triumphantly returned and settled down back in Boulder County. He's written numerous screenplays, loves hiking, and embarrassed himself in front of Samuel L. Jackson. True story.
Tagged: deanna dunaganed oxenbouldkathryn hahnm night shyamalanolivia dejongepeter mcrobbiethe visit