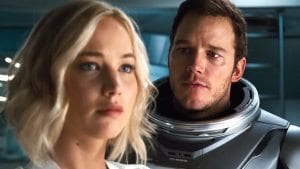 Dear reader, I have to be honest with you. I have a problem. As much as I want you to read this review of the new film Passengers, you really don’t need to read it. All you need to do is direct your eyeballs up a few inches to the picture of the pretty people, and everything you need to know is right there. Let me explain.

In the background is Chris Pratt. He’s in sharp relief, handsome. He’s wearing a spacesuit, so that suggests he possesses a degree of competence most of us beta males are lacking. But his mind is in other places, evidenced by the fact that he’s staring at Jennifer Lawrence wistfully, with perhaps a hint of possessiveness? In the foreground is J-Law herself. She’s a little out of focus, slightly gauzy, but we can still see her movie star beauty. She gazes off into the distance, perhaps wondering where she can get a latte at this hour. Is she even aware of Pratt looming behind her like Donald Trump at a presidential debate?

Are these two doing anything? Are they inhabiting characters, or helping to drive a compelling narrative? We can’t tell, but, jeepers, they sure are pretty. See, that’s the problem. We’re meant to look at this image of two of the world’s most popular movie stars and be gobsmacked by their physical perfection. Our pulse is meant to quicken at the idea of these two demigods having a romantic adventure. The money practically prints itself. However, there’s a vast chasm between what the filmmakers meant to make, and what they actually made.

We’re introduced to the spaceship Avalon, a massive vessel, with a crew of over 200, and over 5,000 passengers. They are on a journey to Homestead II, a planet ripe for colonization. The voyage to Homestead II will take 120 years to complete. That’s why everyone aboard spends decades sleeping in hibernation pods, while the ship’s computers guide it across the universe. It’s a pretty good plan, except for one tiny snag. A hibernation pod malfunctions, inhabited by mechanic Jim Preston (Chris Pratt). He’s awakened 90 years too soon, and he’s the only one awake.

Unfortunately, there’s no way to put himself back to sleep, so Jim tries to make the best of it. He drinks a lot, befriends the robot bartender Arthur (Michael Sheen), and explores the Avalon. It’s a beautiful ship that looks designed by Apple, featuring amenities like a pool, movie theater, holographic dance-off competitions, the whole shebang. It would all be wonderful, if not for the crushing loneliness and the terrible knowledge that he’ll die alone.

Things aren’t looking good for our boy. But while strolling through the ship, Jim comes across a pod containing Aurora (Jennifer Lawrence). He learns that she’s a writer, and is funny, smart, and looks exactly like Jennifer Lawrence. Jim falls in love with her or at least thinks he does. A thought starts to gnaw at him. If he breaks open her pod, he can spend the rest of his life with her. He won’t be alone anymore. Jim asks Arthur what he should do, about the morality of waking her prematurely and essentially murdering her in order to ease his isolation. Arthur responds amusingly with the line, “These are not robot questions.”

Jim makes it look like an accident. Aurora awakens and is understandably terrified by her situation. Jim is there to comfort her, do his best to make things easier. He’s a Nice Guy. But this is a mainstream American movie starring pretty people, which means they need to fall in love with as little nuance as possible. Along the way, they meet Deck Chief Gus (Laurence Fishburne), who’s also suffered a pod malfunction. Matter of fact, lots of things aboard the ship are starting to malfunction, and they need to figure out a solution before everybody bites the big one. You’ll also see Andy Garcia wasted in one of the most pointless cameos I’ve ever seen.*

So why am I so angry at Passengers, a dumb studio movie that just wants to be loved? There’s a lot to unpack. We can start with Norwegian director Morten Tyldum, best known for the cracking good thriller Headhunters, and the perfectly adequate but sadly overrated The Imitation Game. His work here is fine but soulless. Tyldum seems to be slowly getting eaten by the Hollywood machine since each movie he makes is a little more generic than the last. Headhunters had intelligence and a point of view, while Passengers could have been directed by a dozen other filmmakers in basically the same way.

Is screenwriter Jon Spaihts to blame? Partially, but let’s remember that his screenplay showed up on the Blacklist a while back, the listing of Hollywood’s best unproduced scripts. He’s a good writer, and he most recently worked on Doctor Strange. Spaihts does particularly nice worldbuilding here, and there are some good jokes about how second-class passenger Pratt can’t get the high-quality meals reserved for first-class. My gut tells me there was studio meddling done on this script, notes by nervous executives to make characters more likable and to make the story go down easier for viewers.

Are Lawrence and Pratt the chief architects of this film’s failure? No, because they’re doing what they’re asked to do. Both of them are enormously likable actors, but they have no real chemistry with each other. They’re the fun people next door that you want to have a drink with, and both of them do better when paired up with somebody with an edge. Also, while I like Pratt a lot as a performer, he’s miscast here. He spends so much time moping around like a Golden Retriever that’s been yelled at for peeing on the rug. It’s great that he’s trying to stretch his acting muscles, but he’s only able to make us feel Jim’s desperate loneliness superficially. He can’t keep up with Lawrence.

The main problem here is unintentional but no less damning. The crux of this film is that Jim condemns Aurora to a lonely death in space. She never had the choice to awaken, she was never given consent, and she has to deal with this lousy situation caused by male privilege. It’s the same kind of thing women have to deal with on a regular basis. The unwanted touches. The “harmless” pet names. The innocent flirting. All caused by men who either don’t know what they’re doing is inappropriate or just don’t care. Passengers poses a thorny ethical question; is it immoral to give another person a death sentence just to manage your own isolation? Then it cops out on taking that idea to its unsettling and logical conclusion, and simply gives Jim a pass since he’s played by hunky Chris Pratt.

Recently, Indian director Suraaj got himself into a bit of a kerfuffle. He mentioned that the outfits of the heroines in his films are intentionally shortened. Why? He said that female stars are expected to provide a degree of glamor. Actor Tamannaah Bhatia understandably took offense at that, and posted online that she refused to be treated like a “commodity.” Suraaj apologized. He didn’t intend to hurt anyone. Passengers doesn’t intend to hurt anybody, either. It just wants to be a well-shot sci-fi romance, and it doesn’t mean to be so idiotically sexist.** But it’s frankly baffling that a major studio film can feature the main character making such a sketchy ethical decision, then sweeping it under the rug. The good news is, in six months, nobody will remember that Passengers ever existed.

*How pointless is it? He shows up for maybe 7 seconds, stares at something, and has no lines.

**I know, the irony of a straight, white male preaching about the evils of unintentional sexism isn’t lost on me, either.

Tim Brennan
Tim has been alarmingly enthusiastic about movies ever since childhood. He grew up in Boulder and, foolishly, left Colorado to study Communications in Washington State. Making matters worse, he moved to Connecticut after meeting his too-good-for-him wife. Drawn by the Rockies and a mild climate, he triumphantly returned and settled down back in Boulder County. He's written numerous screenplays, loves hiking, and embarrassed himself in front of Samuel L. Jackson. True story.
Tagged: andy garciachris prattjennifer lawrencejon spaihtslaurence fishburnemichael sheenmorten tyldumpassengers