I ponied up for a glass of wine at the concession stand at the Aurora Fox Arts Center because I was there to see Squirrels, and the billing for it made me wonder if I was about to see an interation of CATS, but with more incest and a political agenda. It seemed like wine might be the drop of social lubricant needed to help me appreciate the experience. Here’s how it went.

The setting of Robert Askins’ play is a drey (a squirrels nest) and it’s a time of inequality and distress. The fox squirrels, hailing originally from “the other side of the 7/11,” have encroached on the territory of the grey squirrels. The old king of the greys, Scurius (played by Josh Levy, who should be cast as Tevye the Dairyman by whomever is producing that play next), is sort of trying to be fair to the newcomers mostly because he has a soft spot for his adopted daughter who is a fox squirrel. The leader of the foxes is Carolinensis, a jaunty and sexy squirrel played by a jaunty and sexy Hossein Forouzandeh. He wants Scurius to share enough of his vast and grossly surplus wealth to feed the starving foxes over the winter. There are lady squirrels, of course, in the characters of Mammalia (the matriarch, played by Kelly Uhlenhopp), Chordata (her daughter, played by Leiney Rigg), and Rodentia (the adopted fox with major daddy issues, played by Rachel Turner). The other character is Sciuridae (Andrew Uhlenhopp), an old grey who lives in a dumpster and is generally a repulsive entity, even if he looks natty in his urban leather togs. Also, how charming is it to name the characters these Latin appellations? 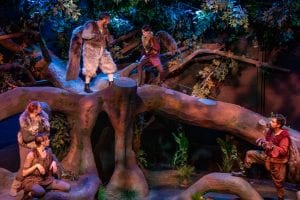 The costuming for all the characters was delightful fun. This is not the uncanny valley of the CATS costumes, where the players are eerily and uncomfortably decked out in full-body cat outfits that reduce their humanity, but not far enough to sit comfortably with the sober mind. The Squirrels folks were dressed in regular human clothes, tights and vests and such, with accents of fuzzy gloves and arm warmers that represent the subtle color shading of their grey or fox heritage. Each player had a magnificent tail–the higher status the squirrel, the more luxurious the tail. The tails were the source of much personal expression for the squirrels–in fact, they were near-perfect reenactments of the thrashing, waving, and twitching of tails that I see through my window every day while watching the randy squirrels in my backyard. It reminded me of my own graceless seduction techniques and made me wish I had a literal tail to throw in the face of my romantic targets in hopes of increasing my success rate, which is notably poor. The tails were the equivalent of human’s Rolex watches or Louboutin stilettos–superfluous signals of sexual prowess. Frankly, they got me a little excited, especially Carolinensis’s with his Che Guevara energy (perhaps an intentional parallel?), and then I felt weird about treading the line of bestiality. I drank more wine and that feeling went away. 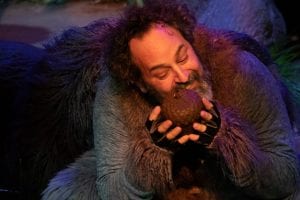 The squirreliness was not limited to just the shaggy tails. The players deliver the lines with a chattery, buzzy, rodentian energy and a great deal of clicking and chattering. I’ve tried to replicate some of those sounds sitting at my desk and…it makes my mouth really dry. I’m sure they had glasses of water backstage, but I prefer to think of them lapping sips of water off of human-sized hamster water bottles.

It’s fun to talk about the weirdness and its accompanying zany energy of the squirrel costumes and play, but let’s not get too far off track. The point of staging this story within a world of squirrels (“the squirrold,” as the characters charmingly say) is to give us enough distance to discuss some real and pressing issues in society.  As humans sitting outside the story, it’s perfectly clear to us that the grey and fox squirrels are completely interchangeable. There should be no issue with them mingling or moving about; and yet there is an issue, albeit one entirely manufactured by those in power who feel that resources are their rightly-earned due and the “others” need to earn their own. Meanwhile, the “others” struggle to accrue enough of those depleted resources to survive. The viewpoints of each are understandable–the old ones *did* work hard to gather their nuts. But the young and new ones *are* struggling against an impossible situation created by their predecessors. There’s an evocative scene where Scurius laments the demands made on him that pulls me to a song from Hadestown, where the singer asks the same question about his followers,

Have I made myself their lord

Just to fall upon the sword

Of some pauper’s minor chord?

Who will lead them? 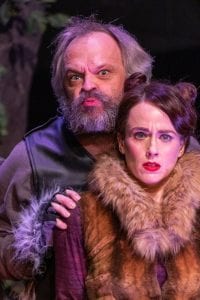 It’s a worthwhile question, but must be framed against the image of the questioner sitting surrounded by an unconsumable pile of wealth and power. Is he really concerned about his followers or about his own image of self? Even more importantly, what’s the solution to this situation? Remove and redistribute all the wealth? Banish those who didn’t get enough soon enough? If either is actually done, how do we keep things from drifting back to polarized extremes? The play concludes with Chordata commanding her compatriots to enact what she sees as the solution. I won’t spoil it here, except to say that I’m not quite sure that her solution in the fantasy “squirrold” that neatly concludes the play is something that can be scaled up to fix the problems of the real world. The play also includes references to myriad other modern social issues that would take far too long to mention and unpack here, but are worth considering as you watch the production.

I also won’t spoil the very last bit, except to say that I found the final reveal to be an utterly delightful denouement that prepares the audience for our return to reality. The whole piece was beautifully written and the last note didn’t disappoint.

Squirrels runs through February 9 and you should definitely make time to see it.

Jessie Hanson
Jessie Hanson lives and works in Denver and couldn't be happier about it. Like the best-possible kind of Jekyl-and-Hyde scenario, she splits her life between science and storytelling. During the day, she performs clinical diagnostics and messes around with test tubes. At night, she performs behind the mic as a standup comedienne, in the air as a circus aerialist, and in rhinestones as burlesque dancer. She begrudges the hyper-inflated cost of a decent pair of false eyelashes. When she's not on stage, she sweating it out as an endurance athlete in triathlons and marathons across the West. She begrudges the hyper-inflated cost of a decent pair of running shoes. She's thrilled to be on board with OnDenver and writing about science, comedy, circus, athletics, and general fun on the Front Range!
Tagged: aurorasquirrelstheater