Home » Blog » Movies » Something Evil Lives In The Woods

Something Evil Lives In The Woods 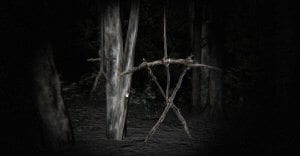 There are two types of people in the world. Those who thought 1999’s The Blair Witch Project was a masterpiece of slow burn horror and those who thought it was about a group of idiots wandering pointlessly in the woods. I’m the former. My wife is the latter.

It’s undeniable that The Blair Witch Project is one of the most important films of the last 40 years. The film helped to popularize the found footage genre.* The internet was still very much in its infancy and the film’s DIY aesthetic along with a brutally effective marketing campaign created a nagging feeling that maybe, just maybe, you were watching a snuff film. Perhaps most important was the performance by Heather Donahue, a performance so iconic that you can’t think of the film without thinking of her tear-streaked monologue. Donahue is so real and so honest, she should have been nominated for an Academy Award.

The shadow cast by the legacy of the Blair Witch is a long one. There were novels, comics, video games, and a sequel. Book of Shadows: Blair Witch 2 was released a year after the original. Despite being directed by the talented documentary filmmaker Joe Berlinger, Book of Shadows traded the nightmarish ambiguity of the first film for 10 pounds of stupid crammed into a 5-pound bag. After that, there was nothing.

But earlier this year, there was cause for celebration. The creative and smart writer/director team of Simon Barrett and Adam Wingard were working on a new film. Considering that these guys made the clever home invasion thriller You’re Next, and The Guest, a fun riff on The Terminator, that was news worth paying attention to. All we knew was the film was called The Woods. It was filmed in absolute secrecy in Vancouver and at this year’s Comic-Con, they revealed the real title to much fanfare. Wingard and Barrett had made Blair Witch, a proper sequel to the 1999 original.

Their premise isn’t bad, and it effectively builds upon the original. We meet James (James Allen McCune), the brother of the missing Heather Donahue. His sister vanished when he was a small boy, and he grew up with a piece of himself missing as well. Like the obsessed protagonist in The Vanishing, James yearns to know what happened to Heather. His girlfriend Lisa (Callie Hernandez) sees an opportunity. She’s a film student, and when James finds a very odd video on YouTube showing a woman who may be Heather running through a ruined house, she decides to make a documentary about James and his quest.

They set out to explore the forests of the Black Hills in Maryland, and they’re joined by James’ buddy Peter (Brandon Scott), who remembers the fruitless search parties for Heather. Ashley (Corbin Reid), who is Peter’s girlfriend, decides to tag along because apparently camping in woods that are haunted by an implacable evil spirit is a guaranteed good time. Luckily, Lisa has brought an arsenal of cutting-edge equipment. Everybody is outfitted with ear-mounted cameras, which cleverly explains why continuous filming takes place. They also have a camera mounted on a drone to provide soaring aerial footage.

Things get weird when James makes contact with the person who unearthed the mysterious YouTube footage. That’s actually Lane (Wes Robinson) and Talia (Valorie Curry), a pair of locals living in the tiny town of Burkittsville, the last outpost of civilization before the forbidding expanse of the woods begins. They demand to join the group in exchange for showing James where the footage was found. The townies have grown up learning about the mythos of the Blair Witch, and they seem to be the only ones who realize that heading into her territory is a bad move.

Well, it turns out it is a bad move! Ashley cuts her foot badly while crossing a stream and infection sets in. Their GPS decides to stop working, and the sun decides to stop rising. Dozens of weird stick figures are placed around their campsite while howling coyotes keep them up at night. Something is hunting them.

To paraphrase director Adam Wingard, The Blair Witch Project is about being lost in the woods, while Blair Witch is about being chased through the woods. For the folks that loathed the original, Wingard and Barrett’s new take is more of what they must have been expecting. While it’s undeniably a found footage flick, it’s more slickly made, better shot. There are no scenes here where the camera points at the ground during conversations. There are honest-to-God special effects.

But this entry isn’t a retread made by some soulless Hollywood producer. Barrett and Wingard understand why the original worked, and they layer on additional material to engineer a perfectly fine sequel. Wisely, they get that the tension needs to be gradually cranked up over time before it explodes. When it does explode, hoo boy. Most horror directors can get things cooking for a few minutes or so. Here, approximately the last 30 minutes is an endurance test. There’s a scene where, if you’re claustrophobic…well, I’m sorry you’re claustrophobic. Also, you actually get to see the Blair Witch. Very, very briefly.

Having said that, the flick ain’t perfect. If you hate jump scares, you’ll absolutely despise Blair Witch. There are lots of shots where A PERSON LEAPS OUT OF THE DARKNESS or A THING POUNCES INTO THE FRAME. You know the old cliche where something scares the hell out of the main character, and it’s only a cat? There’s an awful lot of that sort of thing going on.** Also, the characters are occasionally way, way dumb. If you were part of an expedition going into a potentially haunted forest, wouldn’t it be wise to have a support system in place, you know, in case things go bad? And while we learn a bit more about the backstory of the Blair Witch, I would have liked to have known more about her endgame. Is she just tormenting those who trespass on her turf, or is there something else in mind?

The actors are all fine. They don’t have too much in the way of fleshed-out characters, since their arcs consist of, “Ho ho, this local legend is a load of hooey,” then “Uh-oh, strange things are afoot,” then “Drat, the legends are true, and I’m going to die horribly!” Still, they never hit any false notes, which I appreciated. I particularly liked Callie Hernandez as Lisa, and she works hard as hell, particularly in that last 30 minutes I mentioned. It’s all about being able to effectively sell not just terror, but despair, and she does that like gangbusters.

The Blair Witch franchise is kind of a weird one, considering that I’m not sure it should be a franchise in the first place. There are lots of directions available to you if you’re working on the Nightmare on Elm Street films since dreamscapes offer infinite story possibilities.*** Here, I think your story choices are either a) a bunch of people are mercilessly pursued in the woods or b) prequels examining the origin of the Blair Witch. The Blair Witch Project is a classic of American film, and while a sequel wasn’t necessary, Blair Witch is the best possible way to do it.

*Sure, most found footage movies are utter garbage, but you have to give credit to Paranormal Activity and Chronicle for using the tropes in the genre creatively.

**Unfortunately, no cats ever jump out at these characters, which was disappointing.

***It’s just a pity that with the exception of the first one, the franchise never really utilized the potential available to them.

Tim Brennan
Tim has been alarmingly enthusiastic about movies ever since childhood. He grew up in Boulder and, foolishly, left Colorado to study Communications in Washington State. Making matters worse, he moved to Connecticut after meeting his too-good-for-him wife. Drawn by the Rockies and a mild climate, he triumphantly returned and settled down back in Boulder County. He's written numerous screenplays, loves hiking, and embarrassed himself in front of Samuel L. Jackson. True story.
Tagged: adam wingardblair witchbrandon scottcallie hernandezcorbin reidjames allen mccunesimon barrettvalorie currywes robinson