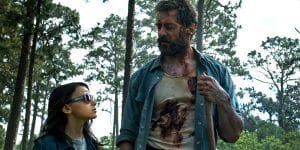 The superhero genre is usually designed to be a perpetual motion machine. Characters keep going through movies, comics, video games, every medium you can think of. They live through decades, change with them, reflect their values and priorities. As a result, smart writers like Grant Morrison, Gail Simone, and Mark Waid have been able to see the potential inherent in the genre and tell a wide variety of stories involving superpowered folks that are complex, challenging, and human.

A superhero movie doesn’t have to be a dull origin, a cackling villain, and a swirling portal of death in the sky, though God knows we still have those inflicted upon us. We’re lucky because, in recent years, filmmakers are figuring that out and using the genre in wide-ranging ways. Looking for one of the best espionage films made in years that also has a conscience? I give you Captain America: The Winter Soldier. Maybe you want a slow burn thriller that’s also about the dissolution of a marriage? I give you Unbreakable. How about a dark comedy-drama with shades of Taxi Driver? I give you Super.

For a little while there, it looked like the X-Men franchise might do the same. The 10-movie franchise about people defending a world that hated and feared them was supposed to be a metaphor for growing up gay, or being black in a predominantly white area, or living as a woman in a sexist world. The first film premiered in 2000. It looks small, a little clunky, and a little cheap now. But it does two things masterfully. First, it pushed that metaphor and showed us that a superhero blockbuster could also be about something.* Second, it gave the world Hugh Jackman. He played the Canadian berserker Logan, code-named Wolverine. Perfectly.

The role made Jackman a star, and deservedly so. He plays the ol’ Canucklehead as a swaggering badass who hides deep reservoirs of pain and guilt. Jackman played the role 8 more times,* and despite the wildly varying quality of the films, he never phoned it in. Not once. Now, he’s back a final time in Logan, and he’s in easily the best of the X-films.

The year is 2029, and the world feels like it’s in a slow and irreversible decline. Radio broadcasts talk of mutants vanishing, and there are dark hints about water becoming contaminated. We’re not in the Heroic Age by a long shot. Logan lives just south of the border and works in Texas as a limo driver. Time is catching up to him. He moves slower, and his healing factor has degraded due to adamantium poisoning. Hell, one of his claws won’t even pop out properly. But he can still carve some fools up, as a group of luckless carjackers discover.

Surprisingly, Logan isn’t spending his days alone. The only one of his friends on the X-Men left is Professor Charles Xavier (Patrick Stewart). Logan has found a home for them, a rusted out factory in the desert. Charles has been confined to an isolated water tower. Why? What happens when the world’s most powerful telepath begins to succumb to sickness and senility? Nothing good. The two men are like an old married couple, bickering viciously and living out their days. Living with them is Caliban (Stephen Merchant), an albino mutant who acts as a housekeeper and nurse.

Logan has been squirreling away money. He plans to buy a boat, and he and Charles can escape onto the ocean. He also carries an adamantium bullet everywhere he goes. The X-Men don’t matter. Mutants don’t matter. Nothing much matters. But Gabriela (Elizabeth Rodriguez) seeks him out. She’s traveling with Laura (Dafne Keen), a young girl who possesses some very Wolverine-esque traits. She presses an envelope stuffed with cash into his hands and begs him to drive her and Laura to North Dakota.

Why in God’s name would anyone willingly go to North Dakota? It turns out Laura is a mutant, and a safe haven called Eden may or may not be there. She’s on the run, hunted by the slimy Dr. Xander Rice. The good doctor is a problem, but the bigger problem is his henchman Donald Pierce, a remorseless cyborg, and his Reavers. Rice created Laura to be a living weapon, and he wants his creation back. Rice never learned in Evil Medical School that these things have a habit of going pear-shaped, but Logan knows it all too well. He’s got zero interest in playing hero one more time, but the world won’t leave him alone.

We still talk about The Dark Knight because it’s a well-made Batman movie, and it asks how far a hero is willing to go in the name of safety. The same goes for Captain America: The Winter Soldier since it’s a muscular action film and an examination of a genuine patriot dealing with an untrustworthy government. The best superhero movies offer a combination of spectacle and ideas, particularly those associated with a particular character. Logan is no different. The character of Wolverine is a savage who yearns for nobility. He’s a ronin, a masterless samurai, and he would advance if only he’d stop getting in his own way. Here, Logan feels like he’s reached the end of his journey, but maybe he can attain some measure of honor.

What’s astonishing is that director James Mangold was able to get away with this. 20th Century Fox owns the film rights to the X-Men characters, but unlike Marvel Studios, the studio doesn’t seem to have the ability or inclination to understand why these characters matter. Smart filmmakers work around the suits at Fox, and Mangold is as smart as they come. He guided Sylvester Stallone to a career-best performance in Cop Land, made a modern classic Western in 3:10 To Yuma, and helped Angelina Jolie nab an Oscar for Girl, Interrupted.

Mangold understands character in general and the character of Logan in particular.  He and Jackman made The Wolverine back in 2013, and other than the last 15 minutes, it was a very smart and stylish film. After Deadpool made swimming pools full of money last year, Fox saw profit in R-rated superhero movies and gave Mangold nearly total freedom to make the right movie about Logan. Make no mistake, Logan is a hard-R, with both blood and f-bombs flowing freely. The action scenes aren’t jammed with CGI here, they’re highly choreographed moments of brutality that feel a lot like the fight scenes from The Bourne Identity.

But amidst the carnage, Mangold has made a film with a deeply sad tone. What happens when you save the world and nobody cares? What if you reach the end of your life and think that nothing mattered? Along with cowriters Scott Frank and Michael Green, Mangold took the bare bones of Marvel’s limited series Old Man Logan, and removed everything except for an elderly Wolverine waiting for death.*** There’s a point to all of it, even the multiple head stabbings, and the action scenes propel the narrative and character instead of just being a multi-billion dollar sizzle reel.

When presented with a superior script, the cast stepped up. Dafne Keen has done some TV prior to this, and I get why Mangold called her a “human special effect.” As Laura, it’s highly entertaining to watch her carve her way through adult opponents while grappling with retaining some degree of innocence. Patrick Stewart can play Charles Xavier in his sleep by now. He doesn’t, and his elderly Professor X rages against the dying of the light and retains enormous compassion.

Stewart has said publicly that this is the last time he’ll portray Xavier, just like this is Hugh Jackman’s swan song as Logan. You never get the sense that Jackman has outgrown the role and wants to get the hell away from the x-universe. Jackman keeps finding new sides to Wolverine. We’ve seen the story before of an old warrior going on a final adventure, as evidenced by a highly effective scene where the characters watch Shane. Logan slowly rediscovers his purpose, and Jackman portrays his journey as both iconic and organic. At some point, the role of Wolverine will be recast, and I feel incredibly sorry for the next guy to strap on the claws.

Odds are, you’ll read other reviews of Logan. Other critics will be stunned that a superhero movie can have this level of emotional complexity and that it can actually be…relevant. But don’t be surprised. It was only a matter of time until superhero cinema caught up to groundbreaking works like Astro City, Watchmen, or Animal Man. Superhero movies aren’t supposed to end, but it’s wonderful when they do.

*The metaphor isn’t subtle, but metaphors don’t have to be.

***If you’re hoping for scenes of Logan and the blind archer Hawkeye driving across a wasteland in the Spider-Mobile, you’re going to be highly disappointed.

Tim Brennan
Tim has been alarmingly enthusiastic about movies ever since childhood. He grew up in Boulder and, foolishly, left Colorado to study Communications in Washington State. Making matters worse, he moved to Connecticut after meeting his too-good-for-him wife. Drawn by the Rockies and a mild climate, he triumphantly returned and settled down back in Boulder County. He's written numerous screenplays, loves hiking, and embarrassed himself in front of Samuel L. Jackson. True story.
Tagged: boyd holbrookdafne keenelizabeth rodriguezhugh jackmanjames mangoldloganmichael greenpatrick stewartrichard e grantscott frank