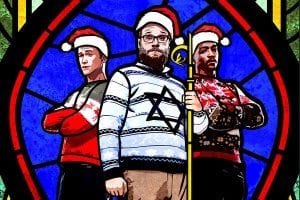 When it comes to performers, we’re ridiculously inconsistent. We discover an actor we like, and we want them to deliver more of what attracted us in the first place. Then we either throw a fit if they take a chance on something new, or bitterly complain when they do “more of the same.”

One example is poor Meg Ryan. Long known as a darling of fluffy rom-coms, she understandably grew tired of briefly being America’s sweetheart. As a result, she tried to stretch her range. She played a crumbling alcoholic in When A Man Loves A Woman, and a doomed Army helicopter pilot in Courage Under Fire.  Audiences punished Ryan for her perceived hubris, and she hasn’t had a hit in years. It sucks, but there it is.

Seth Rogen is another one. First introduced on the TV series Freaks and Geeks, Rogen built a career out of playing lovable stoners in Knocked Up and Pineapple Express. But when he’s tried to stretch himself, like his role as the delusional mall security guard in the viciously funny Observe and Report, he’s been spanked by the box office. As a result, lovable stoners are his bread and butter. That’s fine, since many of our greatest performers have played variations on a theme. John Wayne as a supercompetent cowpoke. Groucho Marx as a sneering wiseass. Back in the day, anyone caught saying, “I wish the Marx brothers would do something different,” would have been rightly tarred and feathered on general principle.

Jonathan Levine’s newest film, The Night Before, features Rogen as a lovable stoner. It also features Joseph Gordon-Levitt as a sensitive hipster and Anthony Mackie as a conflicted jock. You’ll hear people complaining that these actors are just coasting and giving us more of the same. Ignore that foolishness. These guys are all firmly within their comfort zones, which is why they’re able to create such vivid and three dimensional characters.

Years earlier, Ethan (Gordon-Levitt) lost his parents to a drunk driver just before Christmas. The trauma likely would have broken him if not for his friends Chris (Mackie) and Isaac (Rogen). They take Ethan out to get his mind off of his parents, and their pathway of drinking, karaoke and general insanity becomes a yearly tradition. But now they’ve reached a point where their lives pull them in different directions. Chris plays football professionally. He’s just making a name for himself, but he’s 34, an age when most athletes start considering retirement. Isaac is a successful attorney who’s in a wonderful marriage with Betsy (Jillian Bell). Betsy is highly pregnant, and Isaac worries he won’t be able to handle the responsibilities of fatherhood.

Then there’s Ethan. He’s a failed musician and he spends his days working at menial jobs he knows are beneath him. He’s also broken up with Diana (Lizzie Kaplan), because he’s refused to commit and meet her parents. He still pines for her, but he’s trapped in a rut. Isaac and Chris worry he’ll never get his act together, and they’ve decided that this Christmas tradition will be their last. They decide to go out on a high note, since Ethan has snagged tickets to the legendary Nutcracker Ball, a holiday party that’s fiendishly difficult to get into. On top of that, Betsy gives Isaac the thumbs up to have himself a wild night, and gives him a box filled with a galaxy of party drugs.* He goes for it and gets profoundly messed up.

Now the guys must retrace the steps of their Christmas tradition, attempt to locate the Nutcracker Ball, and see if their friendship can survive the night. Along the way they’ll encounter a mysterious weed dealer (MVP Michael Shannon), a Christmas-hating hottie (Ilana Glazer), and drunken Santas (Jason Mantzoukas and Jason Jones), along with an awkward iPhone mishap concerning Diana’s friend Sarah (Mindy Kaling).

A movie like this has a number of elements in play, and it would be easy for it to collapse under its own weight. At times it nearly does, and there are a couple of sequences that don’t work. But director Levine, who also co-wrote the script with Evan Goldberg, Ariel Sfaffir and Kyle Hunter, is able to keep the momentum going. Overall, The Night Before is not only funny as hell, but it also has heart that feels real. It’s unsurprising, since Levine has made films like The Wackness and 50/50 that dance between comedy and real pathos.

I think the primary aspect that makes the film work is the chemistry between the three leads. Ever seen a movie that tells you certain actors are supposed to be friends, but they clearly can’t stand each other?** That doesn’t seem to be the case here, since Mackie, Gordon-Levitt and Rogen feel like a group of guys that have been friends for years. If they’re faking it, they’re doing so extraordinarily well. Speaking of chemistry, I love how Rogen and Bell play off of each other. These two characters have a marriage based on real trust, and it’s nice to see a couple that’s not the old pairing of the dumbass man-child and the humorless shrew.

Sometimes in life, we don’t have a family that we can lean on. When that happens, we’ll often create a new family from the people that surround us. The Night Before is not only a celebration of how we lean on those folks, particularly around the holidays, but it’s also ridiculous and filthy fun.

*It’s so refreshing to see a movie with drug humor that doesn’t also have an undercurrent of puritanical scolding.

**If you’ve seen Charlie’s Angels, you have. Bill Murray and Lucy Liu allegedly despised one another.

Tim Brennan
Tim has been alarmingly enthusiastic about movies ever since childhood. He grew up in Boulder and, foolishly, left Colorado to study Communications in Washington State. Making matters worse, he moved to Connecticut after meeting his too-good-for-him wife. Drawn by the Rockies and a mild climate, he triumphantly returned and settled down back in Boulder County. He's written numerous screenplays, loves hiking, and embarrassed himself in front of Samuel L. Jackson. True story.
Tagged: anthony mackiejillian belljonathan levinejoseph gordon-levittlizzie kaplanmichael shannonmindy kalingseth rogenthe night beforetracy morgan