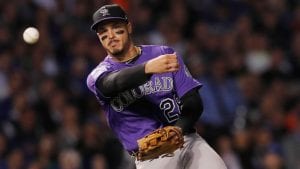 The formula has been working for the Colorado Rockies over the past few years.  Hit a few homers, drink some microbrews, sprinkle in some pitching, and make the playoffs.  With Nolan Arenado sporting a bigtime contract, Kyle Freeland pitching gems, and the usual cast of characters mostly returning, 2019 should be a good one.

But like Ian Desmond at the plate, I’m still not comfortable.

DJ LeMahieu and Adam Ottavino are now New York Yankees, Wade Davis and Mark Reynolds are practically eligible for AARP, and our issues at first base . . . still have issues.

Here are eight major factors that will help determine if the Rockies are, again, playoff bound.

Alan Tapley
Alan Tapley is an educator, author, and blogger who has lived just outside of Boulder for the last twenty years.  His published work includes two novels, two children’s books, a series of cartoons in the Minneapolis Star-Tribune, and multiple sports related articles. His love for family and the state of Colorado is only matched by one thing, his passion for sports.  The first baseball game he ever attended was at Wrigley Field, before there were lights.  At the final Bronco game at the old Mile High, he allegedly cut out a piece of his seat in the South stands.  But regardless of being here for the Avalanche’s last Stanley Cup, the Rockies only World Series appearance, and all the Broncos’ Super Bowl Victories, his wife never fails to remind him that he wasn’t at the University of Colorado in 1990, like she was.  The year the Buffs football team won the National Championship.
Tagged: Adam OttavinoColorado RockiesDaniel MurphyDJ LeMahieuIan DesmondKyle FreelandLos Angeles DodgersMLBNolan ArenadoTrevor Story