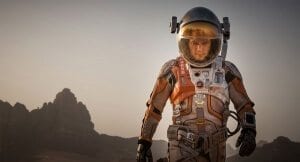 The Martian is the movie we need right now.

We live in an era of astonishing selfishness and decreasing selflessness. These days, fewer people study science and engineering during their college years. In fact, business is the most popular college major. Lots of us are taught that the proper trajectory in life is to get a well-paying job, get rich, and accumulate as much stuff as possible. Many of us are baffled by the idea of doing something for the common good, coming together for a singular goal. That’s the bad news.

The good news is, people are fluid. We can change for the better.* We can be inspired to embrace a cause greater than ourselves. Movies are an outstanding medium for just this kind of messaging. Super Size Me exposed the manipulative marketing practices of fast food companies. Philadelphia put a human face on the AIDS epidemic. The Thin Blue Line helped to free a man on death row who was wrongfully accused of being a cop killer. There’s an awesome power in film that can change everything.**

The particular power The Martian has is the ability to portray science as not only a life-saving skill, but something that’s actually really cool. We meet Mark Watney (Matt Damon), an astronaut and botanist that’s part of a Mars mission. An immense dust storm hits, and Watney is knocked out and swept away by flying debris. Mission Commander Lewis (Jessica Chastain) assumes he’s dead, and must make an agonizing decision. That’s why when Watney awakes, he discovers his crew mates have abandoned on the Red Planet and are speeding home on their spacecraft The Hermes. He’s faced with a limited food supply and a high probability of death due to the incredibly harsh conditions. So what does he do about his predicament? He sciences the sh*t out of it, that’s what. Watney tackles his situation head on and thinks through the problems of shelter, a food supply, and communication with NASA. He does so with ingenuity and good humor.

Speaking of NASA, Watney is finally able to make contact with Earth. Dr. Vincent Kapoor (Chiwitel Ejiofor), the head of NASA’s Mars missions, immediately starts taking steps to try to bring Mark home. His boss and the head of NASA, Teddy Sanders (Jeff Daniels), isn’t so sure. Is it worth it to not only spend hundreds of millions of dollars, but put others at risk, just to save one man? From there we crosscut between Watney trying to keep himself alive on Mars and hundreds of people on Earth devising a plan to save him.

The Martian is incredible cinema, one of the best films of 2015, and a big reason for that is director Ridley Scott. Scott is one of our masters, and he’s responsible for films like Alien, Blade Runner and Thelma & Louise. But if you’re like me, hearing that something is directed by Ridley Scott fills you with deep unease. First of all, he tends to be a fairly cold director, someone who holds his characters at arm’s length and regards them with clinical detachment. Scott is also wildly inconsistent when it comes to quality. For every Gladiator or Black Hawk Down, we have something like Prometheus or The Counselor inflicted upon us.

But regardless of quality, Scott brings a painterly eye to all of his films. Even a movie like Prometheus, which makes no damn sense at all, is still filled with beautiful shots and incredible images. Here, he shows us the vast desolation of an alien and lifeless world. There are multiple shots of Damon against a massive Martian landscape, and it’s almost like he’s on the verge of being swallowed up. Along with that, Scott’s pacing is essentially perfect. The film is close to two and a half hours long, but it never drags. While it rockets between Mars, Earth, and the Hermes, and deals with a gigantic cast, the story never gets bogged down or becomes confusing.

The Martian is also one of Scott’s lightest films, and that’s primarily because of screenwriter Drew Goddard. His script was adapted from Andy Weir’s novel, a book with a terrific sense of humor and a passion for science. Goddard retains those traits, but he’s able to streamline the story when needed and provide smaller characters with brush strokes of personality. Plus, Goddard is a hell of a writer, and he’s best known for co-writing the meta horror-comedy The Cabin In The Woods and the Netflix series Daredevil. He retains the technical and scientific details, but never dumbs things down. While I was in over my head when it comes to intercept speeds and whatnot, I always got the gist of it, and that’s good writing.

The cast is one of the best I’ve seen in a long time. The role of Watney requires an actor that’s smart, likable and determined, but all in moderation. Plus, it needs to be someone that we’ll watch on their own, and that have the charisma to keep us interested. There aren’t many other actors I can think of that could pull it off,***and Matt Damon gives a highly calibrated and Oscar-worthy performance. He’s magnetic and watchable, but deeply human. His Watney is smart, but not arrogant, likable, but not annoying. When we do see cracks of fear and despair, Damon never overplays, but makes it feel natural.

The non-Martian cast is excellent across the board, with a few standouts. Chiwitel Ejiofor is one of the best actors alive, and as Kapoor he continues to prove it. He plays a man of relentless intelligence and a sharp sense of humor, and as Watney must navigate the dangers of Mars, Kapoor must navigate the bureaucracy of NASA. You actually could have swapped Damon and Ejiofor’s roles and the film would have been just as good. As Lewis, Jessica Chastain plays a tough and capable commander with a joyous love of disco. Michael Pena’s Martinez, the pilot of the Hermes, is both brave and hilarious. We’re also treated to Kristen Wiig as NASA’s PR director, Donald Glover as a goofball astrodynamics engineer, and Sean Bean as the deeply moral flight director. Not all of the characters are well-served with character arcs, but with a cast this massive, that’s to be expected.

Mark my words, some high school kid is going to see The Martian, and it’s going to be a transformative experience. She’s going to learn that science isn’t a dull affair, but one that’s exciting and bursting with possibility. She’ll be transfixed by the joy of exploration, the desire to keep pushing and discovering. Most importantly, she’ll see that no matter how bad things may seem, no matter how huge the problems, if we have the will to work together, we can think our way through to a solution. She’ll want to make things better, and we’ll want to help.

**Not always for the better. At a previous job I had, movies about amoral scum like Glengarry Glen Ross and Boiler Room were actually used for sales training. This is like the LAPD using Training Day as a training video.

***Cate Blanchett would have absolutely killed as Watney.

Tim Brennan
Tim has been alarmingly enthusiastic about movies ever since childhood. He grew up in Boulder and, foolishly, left Colorado to study Communications in Washington State. Making matters worse, he moved to Connecticut after meeting his too-good-for-him wife. Drawn by the Rockies and a mild climate, he triumphantly returned and settled down back in Boulder County. He's written numerous screenplays, loves hiking, and embarrassed himself in front of Samuel L. Jackson. True story.
Tagged: chiwitel ejiofordonald gloverdrew goddardjeff danielsjessica chastainkristen wiigmatt damonmichael penaridley scottthe martian