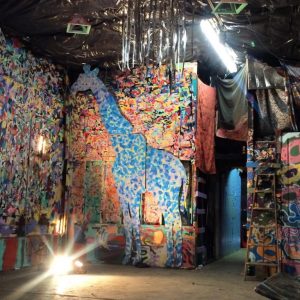 Take a second to examine your computer. If you happen to notice a slight heat coming from the screen, fear not. It’s merely a byproduct of the sheer joy and excitement emanating from the topic of this article. The entire city has been anxiously awaiting the final fate of our beloved DIY venues and THE VERDICT IS IN! Well, somewhat. On a couple of them at least. I could not be more ecstatic to announce that Denver’s premier venue for underground shows of all kinds, Rhinoceropolis, is reopening! In a recent Westword interview, operator John Golter said that he’s just putting the finishing touches on the remodel and it could tentatively open as early as this weekend. This is huge news for music lovers, DIY enthusiasts, and Denver as a whole. Imagine, if you will…it’s Friday night, you and your cool friends are looking for something to do. You want to go to a show but mainstream bands are mostly sellouts these days. Beers at shows are expensive. Every time you work your way up to the front row you have to pee, and your budget is in the “worry about it on Monday” category. Then, as if by magic, it hits you. Rhinoceropolis. 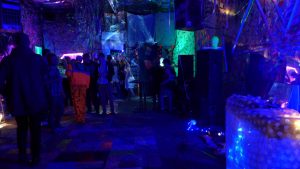 Is there a better place to see an underground show in Denver? Not that I know of. Rhinoceropolis goes way back. It started in 2005 out of musical necessity. These spaces are like flowers growing through cracks in the sidewalk. They spring up naturally when the creativity in any one area becomes concentrated enough. It has to flow out somewhere. Occupying a warehouse space off of Brighton Boulevard, Rhinoceropolis quickly became everything one could hope for in a DIY. The entrance was unmarked, and inside was a large main room with plywood walls completely covered with layers upon layers of brightly colored murals, graffiti, and band stickers. Built into the the walls were hidden bedrooms/studios occupied by local artists. Plywood panels would periodically open up and you would get a glimpse of a room you never knew existed. The bathrooms were equally well hidden. There was a smaller back room that served as a lounge. They had a garage door that opened up to an old loading dock out back and a chain link fence separating the property from some train tracks. It was perfect. Operating for more than a decade, Rhinoceropolis hosted hundreds of shows. Plus they never had a set cover, just suggested donations. They frequently booked local bands and touring acts like Matt and Kim, Crystal Castles, Dan Deacon, Lil Peep, and Lightning Bolt. They were open to all types of music and obscure sub-genres. They even hosted the Denver Noise Fest in 2013. It was a giant two-day event featuring more than thirty bands including Bigawatt, Sisto Rossi, Breakdancing Ronald Reagan, Crank Sturgeon, and Page 27. 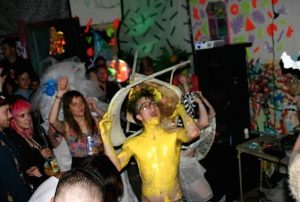 Everything was going at least somewhat smoothly until 2016, when there was a horrific fire at a DIY in Oakland called Ghost Ship. The space was not up to code and an exit door was locked which contributed to 36 deaths. The subsequent crackdown was swift and far-reaching, affecting dozens of beloved DIY’s nationwide. Due to fire code and zoning violations, Rhinoceropolis was shuttered and its residents were evicted. These spaces are almost always born into a life of constant struggle. Even more so in a place like Denver, where the looming threat of gentrification darkens street corners everywhere. They have to find a way to thrive with limited warehouse space, rising rent costs, zoning regulations, fire codes, noise and capacity restrictions, all while trying not to get pushed out by a new set of condos or a trendy coffee shop. It takes an extraordinary amount of labor and love for the local music scene.

Efforts to reopen began immediately. Artists and musicians held fundraisers and came up with about $13,000 for repairs and bills. Local advocates for the art community rallied for the cause and Santa Fe’s Meow Wolf (we get our very own Denver location next year) donated another $20,000. The City of Denver also started the Safe Creative Space fund. Money wasn’t the only obstacle though. Talks with the city and renovating the space have taken over two years, but finally, it appears that all parties have come to an agreement. Rhinoceropolis has been newly outfitted with fire alarms, a wheelchair ramp, gender neutral bathroom signs, a drinking fountain, and numerous other state-of-the-art amenities. It will no longer be allowed to function as a residence, and will have capacity restrictions. Some of the wall panels and murals have reportedly been preserved, which is awesome. Though it won’t be the same old Rhinoceropolis, the spirit involved hasn’t changed. I can’t wait to see them cranking out shows again. 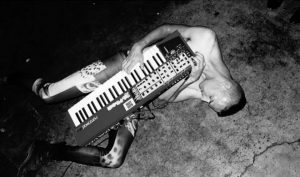 It feels a little bit strange writing about Rhinoceropolis. The place is a legend. Part of the Glob/Mouth House/Blast-O-Mat/TeaHaus era. The feeling you get at these shows is indescribable. The wall to wall murals, the smell of stale beer, the heart that the bands put in. It’s the best ever. Lucky for you, there’s no need to take my word for it. Come and see for yourself. For more info you can check out rhinoceropolis.org or their Facebook, but neither have been recently updated. Your best bet is probably to just drive by 3553 Brighton Blvd and see if there’s music coming from the building. “It’s a city of rhinos, tell your friends.”

Jared Herzing
Jared is a local content contributor and aspiring author. He was fortunate enough to grow up in Golden, Colorado and graduated from MSU Denver. While an insatiable love of travel lures him all over the world, his roots remain firmly planted here. He enjoys writing short stories, poetry, children's books, societal observations, and everything else. A nature enthusiast and sunshine connoisseur, Jared is perfectly at home on any mountaintop or patio. He frequents art galleries and concerts, poetry readings and breweries, museums and bookstores. When he isn't making neighbors cringe at his musical attempts he can be found on a snowboard or sailboat, depending on the day. A perpetual adventurer and eternal patron of the road less traveled.
Tagged: Denverdenver musicdiymusicmusic sceneRhinoceroplisunderground