Return of the Regenerating Degenerate

To enjoy the character of Deadpool, you have to be able to get into his very particular rhythm. If not? Well, I’ll explain with a (thankfully) brief anecdote.

My wife is an introvert. Sure, she can smile, make small talk, and have a genuine and warm conversation. She excels in pretending she likes the majority of people. We get home, though? She double locks the door, barricades the windows, and gives thanks to Jesus, Buddha, and Amen Ra that she only has to deal with a handful of people who aren’t wildly annoying. 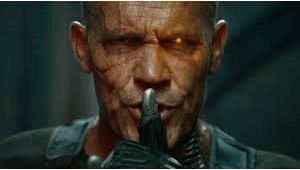 As a result, she barely sees movies with me. It was no surprise that in 2016, she sent me off to catch Deadpool on my own. Despite the pedestrian plot hidden by an onslaught of f-bombs and fourth wall breaking, I really liked it and proceeded to pick up the blu-ray. Now that I had the film in my possession, I proceeded to relentlessly badger my wife to watch it.*

At long last, she acquiesced, and we watched Deadpool not long ago. You ever show someone you care about a movie you adore, and spend half the movie watching that person’s reaction? That’s what happened. On her end, there were some smiles and a few chuckles. As the credits rolled, I asked her what she thought. She replied with, “It was okay, but it was a little childish.” The manic pace and “Bugs Bunny with katanas” feel was neither her cup of tea nor her plate of fajitas. You will not be surprised to learn that she did not accompany me to see Deadpool 2,** which is a pity.

After a highly amusing title sequence in the vein of a Bond movie, we waste no time jumping into the action with Deadpool (Ryan Reynolds) continuing to both enjoy romantic bliss with his main squeeze Vanessa (Morena Baccarin) and slaughtering fools as a mercenary. Thoughts of family are on Deadpool’s mind, though. How can he scratch that itch? By scampering off and pestering the superhero team the X-Men, of course!

He arrives at a familiar mansion in Westchester County, New York, and immediately proceeds to irritate his mutant 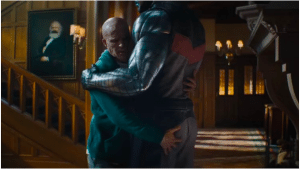 pals Colossus (Stefan Kapicic) and Negasonic Teenage Warhead (Brianna Hildebrand). They reluctantly take on Deadpool as a trainee, and their first mission is to deal with Russell (Julian Dennison), a young mutant being held at an orphanage. He’s been subjected to massive abuse, he has the ability to shoot fire out of his hands, and he’s decided it’s time for a little payback.

Deadpool wants to take the kid under his wing and help him. As you can imagine, things immediately and unsurprisingly go sideways. Deadpool and Russell are arrested and thrown into the Ice Box, a prison for mutants. Things go even more sideways with the arrival of Cable (Josh Brolin), a time-traveling bad mamajama who has a Terminator-esque mission to kill Russell.

Deadpool has neither the experience, intelligence, or sanity to deal with this all alone. He assembles a team, one that’s “tough, morally flexible, and young enough to carry a franchise for 10-12 years.” This is X-Force, and they are comprised of: 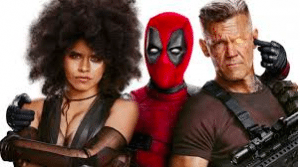 From there, we have explosions, gunplay, gore, wackiness, some surprisingly emotional moments, and a filthy teddy bear that magically becomes clean. If you enjoyed the first film, I guarantee your enjoyment of this film. For my money, I thought that this is one of the rare occasions when the sequel is, pound for pound, better than the original.

Just about everyone involved with the first movie returned, with the exception of director Tim Miller due to “creative differences.” He’s replaced by David Leitch, co-director of John Wick and director of Atomic Blonde. Nothing against Miller, who’s a solid filmmaker, but Leitch is an enormous upgrade. A former stuntman and action coordinator, Leitch has a talent for shooting clean action sequences. Instead of rapid-fire editing, he allows us to appreciate the choreography by showing the entire bodies of the performers. Some of the effects are a touch janky, and Leitch doesn’t seem to be quite as comfortable dealing with CGI heavy sequences as the Russo Brothers are on Avengers: Infinity War. It doesn’t matter too much, because he has a strong understanding of silliness, and I suspect his stunt experience gives him the strong timing to set up a joke as well as a punch.

Screenwriters Rhett Reese and Paul Wernick are back, and Ryan Reynolds joins them on writing duties. They recognize the innate difficulty of writing a character like Deadpool,*** and these guys undertake a very difficult mission that involves zigging and zagging through the story, establishing character, making fun of it all, but doing so without undercutting the emotion. Yes, while this time out there’s more self-referential jokes, bigger action, and some amazing cameos, they also insert a few genuinely touching moments and maintain the freshness that made the first movie such a, you’ll pardon the pun, juggernaut. You’ll also want to stick around for the single best post credits sequence I’ve ever seen.

If we talk about the entire cast, we’re gonna be here all day. I’ll spare you that, and first mention my enjoyment of Zazie 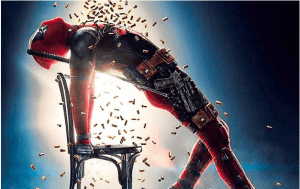 Beetz as the chipper Domino. She’s incredibly entertaining, and brings a burst of upbeat charisma to every scene she’s in. Our old pal Josh Brolin is having a big-ass Moment this year between this film and Avengers: Infinity War. Good for him, says I. His Cable doesn’t have the emotional depths of Thanos,**** but his laconic delivery is a nice contrast to the motormouthed Reynolds. Speaking of Reynolds, yeah, he’s basically doing the same thing here as he did in the original. You know what? That’s great! Like the script, he has to walk a very careful line. Make Deadpool too wacky and he becomes tiresome. Make him too serious and he becomes a brooding psychopath.  This is a strong performance, and I cannot imagine anyone else doing justice to the role.

I came home grinning from seeing Deadpool 2, and my wife wanted to know my “off the top of my head” thoughts. Thinking back to the cascading laughter in the theater made me grin. I would have enjoyed the film just fine on my own, but seeing it with a crowd that was dialed in amplified the experience. That’s coming from a guy who’s fairly extroverted. What would an introvert who faintly rolled her eyes at the first movie think of this one? I’ll let you know her opinion in 7-8 years.

*Along with John Wick and Mad Max: Fury Road. With luck, I will have shown her both of them by the year 2024.

**I really feel like the filmmakers missed out on the chance for a great gag by titling the movie Untitled Deadpool Sequel. Hopefully, if a third film is made, they’ll title it Deadpool 4.

***Why is Deadpool so difficult to write? Check out this excellent article for an explanation.

Tim Brennan
Tim has been alarmingly enthusiastic about movies ever since childhood. He grew up in Boulder and, foolishly, left Colorado to study Communications in Washington State. Making matters worse, he moved to Connecticut after meeting his too-good-for-him wife. Drawn by the Rockies and a mild climate, he triumphantly returned and settled down back in Boulder County. He's written numerous screenplays, loves hiking, and embarrassed himself in front of Samuel L. Jackson. True story.
Tagged: david leitchdeadpool 2josh brolinjulian dennisonmorena baccarinpaul wernickrhett reeseryan reynoldsstefan kapiciczazie beetz