Red In Their Ledgers 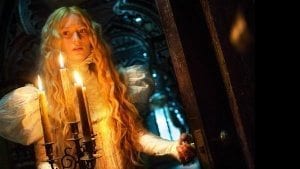 In order for a film to be considered successful, the rule of thumb is that it must make back at least twice its production budget.* Crimson Peak, the newest film from visionary director Guillermo del Toro, had an estimated production budget of around $55 million. So far, it’s only made back about $16 million. It’s tanking hard, a sizable failure.

So why is Crimson Peak going down like the Titanic? It’s certainly not because of del Toro. A Mexican filmmaker, he’s not just an artist. He’s a fierce individualist, a director determined to grasp the beautiful and macabre images swirling in his brain and harness them in service of film. Even when he’s had failures, like his giant cockroaches in the subway tunnels of New York monster movie Mimic, they were interesting failures. They’ve always looked great and had interesting ideas at play.

I tend to lay most of the blame at the feet of the marketing department at Legendary Pictures. If you’d seen the trailers for Crimson Peak in the last few months, you’d reasonably assume it’s a fast-paced and scary as hell horror movie. Here’s the thing, though. While there is a ghost, some impressive gore, and some scary scenes, it’s not actually a horror movie. Don’t get me wrong, it’s a film that’s certainly spooky, and there are a few jump scares, but I wouldn’t necessarily suggest it as Halloween-appropriate.**

Instead, Crimson Peak is more of a Gothic romance. Our heroine Edith (Mia Wasikowska) even helpfully explains what the movie is about. She’s a writer, and as she’s submitting a manuscript to a publisher, she tells him, “It’s not a ghost story, it’s a story with ghosts in it.” Edith is smart, kind and brave, and had she been around during the 21st century, she would surely go far. But the film takes place in Buffalo, New York, during the early years of the 1900’s, and women are expected to snag a decent husband and support his career. She’s understandably frustrated, she wants more out of her life, and she doesn’t view the kind and square eye doctor McMichael (Charlie Hunnam) as a suitable partner.

But everything changes when aristocrat Thomas Sharpe (Tom Hiddleston) sweeps into her life. Sharpe has nearly perfected a machine designed for mining the red clay that his ruined English estate sits upon. He just needs funding to complete the machine, and he’s come to ask Edith’s wealthy father Carter (Jim Beaver) to bankroll his enterprise. Thomas likes Edith’s writing, and likes her. Soon they’re in love, and engaged to be married. When Carter dies under mysterious circumstances, she returns with Thomas and his icy sister Lucille to their ancestral home of Allerdale Manor.

At this point, the plot really kicks into high gear. As Edith explores the dilapidated mansion, she uncovers the secrets of the Sharpe family. There are revelations, betrayals, and supernatural forces. It all takes place within Allerdale Manor, which sits atop red clay beneath the house that oozes red like thick blood. A gigantic hole is in the roof of the mansion, allowing dead leaves and snow to swirl within the vast hall.

Del Toro has made a film that’s absolutely gorgeous. It’s awash in deep colors, astonishing sets and beautiful costumes. The way the film feels, you want to luxuriate in it. It’s so beautiful that you could take nearly any shot from the film and have it framed on your wall. Not only has he created a setting of corrupted aristocracy, but he’s made an environment that boosts the story and the characters to greater heights. Del Toro, along with co-writer Matthew Robbins, offers a style of storytelling that’s old-fashioned and theatrical, and I mean that in a good way. The emotions are huge, operatic, and everything feels like a cross between Edgar Allen Poe and Jane Eyre, along with a dash of the old Hammer horror movies.

With period pieces, the risk filmmakers run is that their cast will feel too modern and won’t make the production feel organic. Luckily, that’s not the case here, as the leads fit in nicely. Mia Wasikowska’s Edith is a likable lead, plucky and smart, and it’s like she stepped out of the pages of the old penny dreadfuls. She’s got terrific chemistry with Tom Hiddleston, who expertly walks the line between fantasy and emotional honesty. As Loki in the Marvel movies, Hiddleston has done this kind of thing before. He makes it look easy, even though it’s fiendishly difficult.

As McMichael, Charlie Hunnam is fine, if a little dull. Del Toro has found a good use for him, since McMichael is meant to be the dependable hero who’s not quite as useful as he thinks he is. But the film’s MVP is Jessica Chastain as Lucille. She’s cold, calculating and she doesn’t miss much. Chastain’s performance is very precise. She knows when to underplay, by smiling slightly to suggest something, and she knows when to go huge. I loved watching her work, and she’s becoming one of my favorite actors.

So we have Crimson Peak, a film that’s marketed incorrectly with a style of storytelling that’s about 100 years out of fashion. Was it always destined to be a failure? Maybe a financial one, but as an example of art and of film, it’s unquestionably a success. There’s nothing else like it out right now, and if you’ve got an inner Goth or English major, this will be right up your alley. It’s utterly unique, and could only have been made by Guillermo del Toro.

*Though, that’s not always the case. Forrest Gump was a global smash hit, making over $650 million during its first theatrical run. However, Paramount Pictures claimed they actually lost $62 million in profit. When it comes to convoluted accounting, these guys could teach the Mafia a thing or two.

**You want a flick that will scare the hell out of you? Watch Neil Marshall’s The Descent. It’s about a group of women on a spelunking expedition. They’re trapped in a cave-in and must find a way out. Amidst the crushing claustrophobia, they discover that something in the darkness is hunting them. Great stuff.

Tim Brennan
Tim has been alarmingly enthusiastic about movies ever since childhood. He grew up in Boulder and, foolishly, left Colorado to study Communications in Washington State. Making matters worse, he moved to Connecticut after meeting his too-good-for-him wife. Drawn by the Rockies and a mild climate, he triumphantly returned and settled down back in Boulder County. He's written numerous screenplays, loves hiking, and embarrassed himself in front of Samuel L. Jackson. True story.
Tagged: charlie hunnamguillermo del torojessica chastainmatthew robbinsmia wasikowskatom hiddleston