Quick, Somebody Call The U.N.! Insurgent Is Cinematic War Crime 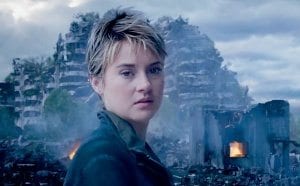 Before I begin the review, I need to explain something. Friendship is a strange thing. I’ve got a good friend named Devila.* We’ve known each other since high school. She’s been there for me through ups and downs and is one of the most fundamentally decent people I’ve ever met. I sincerely love her like a sister. And yet, considering that we have this friendship that spans decades, she still made me see the breathtakingly dumb Insurgent.

Insurgent is the second film in the Divergent series inspired by the YA novels of Veronica Roth. The books seem to be a fairly obvious attempt to nab some of that sweet, sweet Hunger Games cash. Like The Hunger Games, it focuses on a girl’s coming of age in a dystopian future. Unlike The Hunger Games, there’s no creativity, subtlety or intelligence.

To bring you up to speed, the world of Divergent works as follows. Some kind of cataclysm has befallen humanity, and the seemingly last outpost of civilization is in the walled-off ruins of what appears to be Chicago. Forgetting that human beings are multi-faceted, this new society has divided everyone into five factions-Amity, Erudite, Abnegation, Candor and Dauntless. During childhood, you’re hooked up to a scanner doohickey, it tells you what faction you belong to, and off you go. It’s like the Sorting Hat, but for stupid people.

Tris (Shailene Woodley) is a Divergent, meaning that she possesses personality traits applicable to all five factions. Much like every human being who ever lived. In the previous film, Tris led a revolution against the evil Jeanine (Kate Winslet). It didn’t quite work, and Tris and a ragtag group of rebels is still being hunted by Jeanine’s forces. This leads to unintentionally hilarious scenes, where Woodley in a pixie cut snarls, “I want to kill Jeanine.”

Guys, it took all the willpower I had not to screech like a hyena at this.

Anyway, now Tris and her forces must undertake a daring plan to steal a magical box that only a Divergent can open. Yes, it’s another, “Only the Chosen One can use the Thingie of Destiny” kind of movie**, which is awful. Understand that there’s nothing wrong with a “Chosen One” plot, as long as it’s undertaken with some creativity. Arguably the best film of last year, The Lego Movie, took the “Chosen One” plot and turned it inside out to create something smart and fresh.

Divergent, was directed by Neil Burger, a pretty clever director who was apparently slumming it. But Insurgent is directed by the vastly untalented Robert Schwentke. A writer/director since the late ’90’s, Schwentke has managed to make one film*** that’s not insultingly stupid. He’s a director that reliably makes the laziest and most obvious choices, and I can’t for the life of me understand how he’s able to get work. Here, he’s never able to make this futuristic environment feel real or lived in.

The script, by Brian Duffield, Akiva Goldsman and Mark Bomback, does the cast no favors. Along with her quest to retrieve the Thingamajig of Ultimate Awesome, Tris is shoehorned into a lame soap opera subplot with her boyfriend Four (Theo James). So in between boring gunfights and endless shots of people crashing through plate glass windows, there’s lots and lots of scenes where Tris and Four tearfully stomp away, then declare their love, then stomp away again. I swear to God, I’ve never seen a movie that had so many scenes of people storming in and out of rooms. It’s like Much Ado About Nothing on crystal meth.

And the cast! The cast, you guys! Along with Woodley and Winslet, there’s Miles Teller as a conniving scumbag, Octavia Spencer as a neo-hippie, and brief turns from Ray Stephenson and Ashley Judd. These are all phenomenally talented actors, but there’s no magic here. They’re better than the material, and it shows.

Let’s talk about Shailene Woodley for a moment. She’s carrying this franchise on her shoulders, and she deserves a hell of a lot better. She’s giving it her all, but her director and writer aren’t supporting her the same way that Jennifer Lawrence has been in the Hunger Games films. I get why she took this role. If you’re a young actor in Hollywood, you sign onto junk like this so you can make stuff that matters later. It’s just a shame to take an interesting actor like Woodley and give her nothing to do but run through windows and shoot at people. Somewhere down the road, she’s going to win an Academy Award, and we’ll all wonder why she had to waste her time with Insurgent.

In the end, i suppose the thing that annoys me about this series is that it’s all surfaces. The divisions created originally in Roth’s novels seem so one-note. What happens if someone is assigned into a particular faction, but the choice is wrong? Nobody cares about questions like this. We’re just stuck with one-dimensional characters, plot devices, and unsurprising surprises. Ten years from now, these movies won’t matter.

Dammit, Devila, you owe me a Scotch. A big one.

*Name changed to protect the guilty.

**If you’re a budding screenwriter, and you’re determined to follow hoary old story beats like The Hero’s Journey and The Refusal of the Call, and all that jazz, please, for the good of humanity, stop writing. Don’t follow your dreams. We need baristas. Desperately.

***That would be RED, the Bruce Willis retired assassin romp. It’s fun, but it’s not good, per se.

Tim Brennan
Tim has been alarmingly enthusiastic about movies ever since childhood. He grew up in Boulder and, foolishly, left Colorado to study Communications in Washington State. Making matters worse, he moved to Connecticut after meeting his too-good-for-him wife. Drawn by the Rockies and a mild climate, he triumphantly returned and settled down back in Boulder County. He's written numerous screenplays, loves hiking, and embarrassed himself in front of Samuel L. Jackson. True story.
Tagged: insurgentkate winsletmiles tellershailene woodley