Home » Blog » Protests in the Park

Protests in the Park

Usually, I write this column about theater and performance. Well, we are all performing now, in the public theater of this nation—the world’s last, best hope of democracy. I try to keep things lighthearted and positive, but sometimes you have to just tell your story as it is. In this moment where the violence and horror that never ended have once again come into focus with the killings of George Floyd, Breonna Taylor, and so many more, I feel the overwhelming need to do something, *anything* to help.  And so, on several nights this week, I marched my shiny, fragile, privileged, white ass down to Civic Center Park because that was the something I could find to do. Today’s column is my account of Saturday’s gathering, as honestly as I can recall it, with all of my inopportune thoughts and feelings included and unedited. 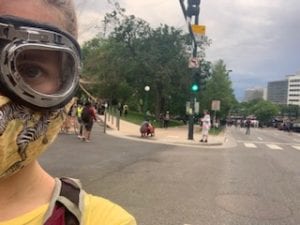 6:00pm: I met my friend in City Park and social media informed us that the police had begun using tear gas in Civic Center. This was the moment when I went from “vaguely excited” to “genuinely scared.” There was a non-negligible chance that this protest would go sideways and people could get hurt or worse. We asked each other if we still wanted to attend. We both said yes. It’s a mark of our privilege that we got to choose whether or not to approach risk, instead of being forced to live within it every day.

6:30pm: We rolled up to the protest area on our bikes and locked them up. I unpacked my cardboard “Don’t Shoot!” sign, my bottle of baking-soda water to neutralize the tear gas, my still-dusty goggles that had seen me through Burning Man and now might see burning against The Man, and my cotton, anti-COVID mask with zebras printed on it. My friend palmed his first-aid kit of rubbing alcohol, gauze, and bandages. Visible clouds of tear gas began rolling up the hill from Civic Center. Oh, hell, I thought. This shit is getting real. Standing there with a box of band-aids and a homemade zebra mask made me feel entirely too small and horrifyingly unprepared for the reality of the moment. What’s a band-aid against big men with explosives or a zebra mask against body armor? How many people, today and throughout history, have felt this same feeling when standing against the powers that be?

I queued up a Bob Dylan playlist on Spotify and sent it to my Bluetooth speaker because I wanted to make a statement about non-violent protest and invoke the heritage of previous movements for this one. Playing Dylan on Spotify through my iPhone at a racial-injustice protest is probably the whitest thing I’ve ever done. Still, I hoped that good music would help keep people in a constructive place with the protest. Can’t hurt, might help.

I’ve never encountered tear gas before. It smells a bit like the black powder that my retired-cop dad loads into his hunting rifle. After the first tang of black powder, it’s a tasteless toxin that fills your eyes and lungs with fire. The immediacy of its power shocked me. There’s no fighting back the wrenching of the lungs and the conflagration of the eye sockets. It reinforces the knowledge that every one of us, first and foremost, absolutely must be able to breathe. I could not have stayed in the thick of it no matter what self-discipline I employed. I hacked and stung and burned; others around me spat and cried and puked. Some sprayed neutralizing milk of magnesia in their compatriots’ eyes. People walked around with faces crusted over, inflamed eyes burning scarlet through the patina of antacids. The police line breathed comfortably through their gas masks.

6:45pm: My friend wandered down to the very thick of things, right into the police line. I lost sight of him within minutes. I am not very brave. I did not follow him to the front lines but stayed up near the steps of the Capitol building. My courage did not kick in: I was plain old scared shitless. I watched the bolder people march up to the police line to kneel and chant, only to be tear-gassed again. The crowd would gather, gain, and then flee like a school of mackerel dispersed by a bluefin tuna as the gas tore through them. Then we gathered again. I advanced as far as my thin mantle of courage allowed and fled when the opaque clouds of gas rolled over me. 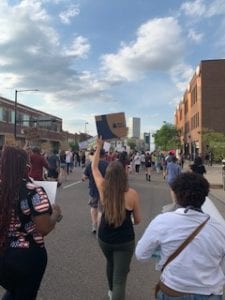 The crowd was diverse and seemed to trend toward younger adults, some in masks and some not. I spotted a pile of red, white, and blue zip ties sitting on a railing. Their attendant protester said they were to make citizens arrests in case there were counter-protesters. I wondered what this guy was going to do if he actually did capture a counter-protester. Stuff him in a van? Take him to an undisclosed location? I’m pretty sure that ‘citizens arrests’ are not a real thing, although unlawful imprisonment definitely is.

7:00pm: Protesters were throwing water bottles and fireworks at the police line. The fireworks exploded and the police retaliated with more tear gas and the flash-bang that accompanies it, which occurrence is a fact that I know now and I didn’t 72 hours ago. The crowd ran and retched, scattered and sobbed, then regathered and re-advanced. This back-and-forth continued, ad nauseum.

As I retreated and re-advanced, the movements started to feel repetitive. The theater major in me wanted to *march around* Civic Center Park. Marching around would advance the narrative of the event, show more organization and efficiency, give the crowd an outlet for its energy, and reduce the pressure the police felt to disperse us with tear gas…instead, we just went back and forth, endlessly and fruitlessly, both sides repeating our Sisyphean gestures—make of that metaphor what you will. The obvious counter-fact to this thought is that the chaos and disorganization was the point. The emotion of the event did not fit well with the concept of calm organization; this was the breaking point of people whose calm organization had not been heeded.

It is shockingly easy to control people’s movements. I was recounting this event to another friend and I tapped his ribs, lightly but firmly, with my knuckle to demonstrate. He flinched and retreated. From one bare-handed finger-poke. What could I do with a billy club? A canister of tear gas? A rubber bullet? The weight of my knee?

7:30m: A fellow protester informed me that the National Guard were coming at 8 pm to enforce curfew. I expected big trucks full of men in combat gear, but I never saw them, although perhaps they were out of my line of sight. (The event did seem to diffuse rapidly at 8pm. I was not present for any later regrouping.)

7:45pm As I ran back and forth across the open space, it didn’t seem like we were really going to succeed in achieving any tangible goal before the 8m MDT curfew. Again, I must conclude that the sheer emotion, presence, and, yes, threat, of that many enraged, heartbroken people was itself the goal.

8:00pm: I text my buddy to see where he is and if he’s ok. He responds that he’s ok but has been pepper-sprayed in the face by the police. A fellow protester assisted him, and he is safe and recovering.

8:10pm: I expected the anger, the grief, the terror, the tear gas. What I didn’t expect was this: A group of three 20-something white folks were pacing up and down a concrete wall above a gated parking lot. One of them had jumped down into the lot from the surrounding wall and was smashing windshields. He climbed back out and asked his companion for something. “The gas?” she asked. She opened her backpack and I saw plastic bottles of gasoline and rocks the size of chicken eggs inside. The other stuff, he said, the little ones. She handed him what looked like a twisted brown paper napkin and he dropped back down into the parking garage. He scrambled back up moments later and the crew dashed away. Smoke began to drift upwards. And I totally narc’ed. I ran a block away and informed a paramedic in his SUV that, dude, some guy just lit a car on fire and it’s going to be “real noticeable real soon,” which is the whitest way to report a problem I can think of. Bob Dylan was still playing on my Spotify. I’m all for the emphatic protest of injustice, but I don’t want to see dozens of people injured or killed in a fireball in the heart of the city. The fire department sirened up and cut a hole in the fence and put out the fire, but not before the flames licked high into the air and black, acrid smoke added to the protest atmosphere of tear gas and rage. In the midst of the American carnage that was playing out in front of us, these vandals had made wanton and indiscriminate destruction their goal.

War is alternating moments of terror and boredom, I am told. The protest proved to me I am completely unfit for any sort of military combat, but “terror and boredom” was what it felt like. I was terrified, bored, fascinated, horrified. I choked on tear gas and cried for the Black lives crushed under white rule. I grieved for the America that we had a dream of but have never been able to enact. I protested the violence and danger inflicted by one set of public employees while I requested that another set rescue the public from violence and danger. I was enraged at the loss of Black lives, but also unconvinced that even this would effect real change. And that’s the thing: if quiet diplomacy is ineffective, if peaceful protest is ineffective, if riotous outbursts are ineffective…what the hell will make this better?! I don’t know what the right thing to do is. All I know is that I tried hard to do *something,* even imperfectly, on these endless nights of demonstrations, and I hope it helped. Hold on, folks. It’s going to be a long, hot summer.

Jessie Hanson
Jessie Hanson lives and works in Denver and couldn't be happier about it. Like the best-possible kind of Jekyl-and-Hyde scenario, she splits her life between science and storytelling. During the day, she performs clinical diagnostics and messes around with test tubes. At night, she performs behind the mic as a standup comedienne, in the air as a circus aerialist, and in rhinestones as burlesque dancer. She begrudges the hyper-inflated cost of a decent pair of false eyelashes. When she's not on stage, she sweating it out as an endurance athlete in triathlons and marathons across the West. She begrudges the hyper-inflated cost of a decent pair of running shoes. She's thrilled to be on board with OnDenver and writing about science, comedy, circus, athletics, and general fun on the Front Range!
Tagged: George Floydpoliceprotest