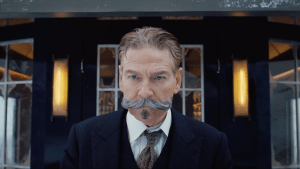 We’re coming to the end of 2017, and not a moment too soon, says I. In terms of reasonable behavior, this year has been an absolute horror show. Previously respected actors, artists, and other public figures have been revealed to be degenerates. The citizens of Alabama are seriously considering voting for an alleged child molester. Our very own President literally cannot go more than a week without saying or doing something insulting, vulgar, stupid, or all of the above.

It makes one yearn for a more sophisticated time, a time where manners, taste, and class weren’t in woefully short supply. But is that a reasonable response, or is it simply what happens as we age? How long before I yell at all of you to get off my damn lawn?

Agatha Christie knew a little something about that perspective. As she aged, the grand doyenne of crime fiction frequently reflected her perspectives through her novels. Her most famous creation was Belgian detective Hercule Poirot, and in Christie’s later works, Poirot was frequently amused by encounters with younger characters flaunting their vulgarity. What Poirot (and Christie) would have made of the Foul Year of Our Lord 2017 is anybody’s guess.

But all is not lost! Occasionally, moviegoers are treated to an immersive spectacle, only we’re not immersed in the order of the Jedi or the ranks of the Avengers. Instead, we’re dropped into an age that never quite existed, though perhaps we wish aspects of it did. Watch The Talented Mr. Ripley and marvel at the easy style of coastal Italy. Watch Titanic and witness the glittering surroundings of the first class passengers.* Now, Kenneth Branagh has brought us Murder on the Orient Express, and while the story within the Art Deco furnishings is somewhat slight, the feel of the film itself is phenomenal.

We’re dropped into Jerusalem in 1934. A religious artifact has been stolen, and a priest, a rabbi, and an imam may have been involved. Famed investigator Hercule Poirot (Kenneth Branagh) has been brought in to crack the case. Poirot is confidently eccentric. He’s a man who insists on perfectly hard-boiled eggs, and when he accidentally steps in horse poop, he proceeds to place the other foot in poop in order to “restore balance.” Our possibly-on-the-spectrum hero reveals the perpetrator with no small amount of elan, and we’re off to the races.

After that, Poirot travels to Istanbul and looks forward to a well-deserved vacation. It ain’t gonna happen since he receives an urgent telegram from London requesting his assistance. His friend Bouc (Tom Bateman) happens to be in town and also happens to be the director of the Orient Express. The train is packed full, but Bouc gets Poirot a cabin. Also on board is Ratchett (Johnny Depp) an oily American art dealer. Poirot’s reputation (and mustache) have preceded him, and Ratchett needs help. Turns out Ratchett is a touch corrupt, and he’s been receiving death threats.

Ratchett turns up dead, having been enthusiastically stabbed to death in his quarters. Who could have committed such a foul deed? Well, there are a couple of suspects…

After an avalanche brings the Orient Express to a screeching halt, Poirot must uncover the culprit (or culprits!) before more dead bodies turn up. Sounds easy, right?

If you’re an Agatha Christie nerd, or a fan of David Suchet who played Poirot for roughly 17,000 years, you’re probably wondering how this iteration stacks up. I thoroughly enjoyed looking at it. Kenneth Branagh also directed, and he’s made a lush and tactile film in gorgeous 65mm. His camera prowls through the train corridors, glides above the compartments, and clearly sets up the geography for us. Better yet, the sets and costuming are rich, vibrant, and you can almost feel the leather chairs and smell the snifters of brandy. The pacing is iffy, considering we have many, many scenes of Poirot interrogating suspects and giving grandiose speeches.

The script is by Michael Green, who also wrote the very good Blade Runner 2049. It does a nice job of introducing us to Poirot and keeping the focus on him through a sometimes bewilderingly large cast of characters. The flip side of that coin is that Poirot is the only well-developed character, and several members of the cast feel like they’re in glorified extended cameos. I know, if every character had a satisfying arc, we’d have an 8-hour long film. But the supporting cast could have been filled in with more efficient brush strokes. The mystery itself doesn’t always have the weight it should, and the script has a little more preoccupation with laughs instead of deduction.

Despite that, we have a prestige cast full of compelling performers. While pros like Derek Jacobi and Judi Dench don’t have much to do, it’s still satisfying just to see them. We appear to be in the midst of a Michelle Pfeiffer-aissance, which is a-okay by me. She’s lively, funny, and very entertaining. Daisy Ridley and Leslie Odom Jr. have nice chemistry, and Willem Dafoe’s reptilian professor was fun.

However, this is the Kenneth Branagh All-Star Hour, and he clearly wants viewers to know that Poirot is the main character. He’s got a legendarily healthy ego that’s on display here, but honestly? I’m kind of okay with that. In this role, Branagh is enormous fun as a brilliant investigator who’s also pompous and not a little ridiculous. He’s got the best sight gag of the film, and repeated scenes of him guffawing while he reads A Tale of Two Cities are marvelous. I’d gladly watch an entire movie of Branagh’s Poirot grocery shopping.

A word about Branagh’s facial hair. His mustache looks like two gray squirrels are unsuccessfully hiding in his nostrils. I confess that I found it hypnotic, captivating, a miracle of manscaping that’s on par with Kurt Russell’s impressive lip sweater in Bone Tomahawk. I implore you to see this film, if for no other reason than to bask in the glory of Branagh’s mustache opus.

I digress. As a pure mystery, Murder on the Orient Express is just okay. But as a Branagh acting showcase, as a handsomely directed film, and as a nostalgic reminder of more elegant times, it’s a triumph. We’ve got a mid-budget drama aimed at adults that has, first and foremost, class.  If you’re a certain kind of viewer, this film will go down like a glass of champagne on a cold winter night.

*I’ll go to my grave defending Titanic as being quite historically accurate, providing you get rid of everything involving Leonardo DiCaprio and Kate Winslet’s characters. If you’re looking for a truly great film about the doomed ship, check out A Night To Remember.

Tim Brennan
Tim has been alarmingly enthusiastic about movies ever since childhood. He grew up in Boulder and, foolishly, left Colorado to study Communications in Washington State. Making matters worse, he moved to Connecticut after meeting his too-good-for-him wife. Drawn by the Rockies and a mild climate, he triumphantly returned and settled down back in Boulder County. He's written numerous screenplays, loves hiking, and embarrassed himself in front of Samuel L. Jackson. True story.
Tagged: daisy ridleyderek jacobijohnny deppjosh gadjudi denchkenneth branaghleslie odom jr.lucy boyntonmanuel garcia-rulfomichael greenmichelle pfeiffermurder on the orient expressolivia colmanpenelope cruzsergei poluninwillem dafoe