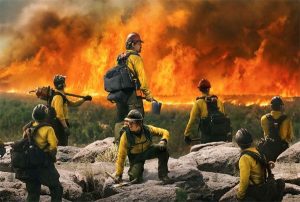 Can you imagine it?

It’s you, 17 of your brothers, and your supervisor. You see the fire coming at you. The word inferno simply doesn’t do it justice, with 70-foot flames and temperatures about 2,000 degrees. The fire is big, hot, and moving right for you at unbelievable speed. So you do what you’ve been trained to do. You clear a space for your fire shelter, a large foil pouch lined with silica-thread cloth. You lay flat on your belly, pull the fire shelter over you. Maybe you pray. You hope it will do some good.

The Yarnell Hill Fire started on June 28, 2013, near Yarnell, Arizona, likely due to a lightning strike. On June 30, strong winds caused the fire to grow from 300 acres to over 2,000 acres. That same day, 19 Prescott firefighters known as the Granite Mountain Hotshots, were killed when the fire overran their position. It was the deadliest incident involving firefighters since 9/11.

Like 9/11, the story of the Granite Mountain Hotshots is about a group of men who sacrificed themselves while trying to save lives. It’s about heroism, a word that’s thrown around to a truly obnoxious degree these days, but the word is absolutely appropriate here. It’s about a group of professionals involved in a job that’s fascinating and dramatic. Naturally, the potential movie sells itself.

But here’s the thing. A dramatic real-life occurrence does not always make a good film. A thin and treacherous line must be walked between showing respect for the truth and crafting a narrative that’s gripping. Even more importantly, while the film can be occasionally dopey, it cannot be exploitative. Of course, a movie was made about the Hotshots. It’s called Only the Brave, and it does feature some eye-rolling moments, but its heart is definitely in the right place.

Let’s first explain that “hotshots” are teams of elite forest firefighters. They’re certified and trained to head into areas that are, you guessed it, on fire, and create a fire line. What’s a fire line? According to our pals at Wikipedia, it’s a “gap in vegetation or other combustible material that acts as a barrier to slow or stop the progress of a bushfire or wildfire.” But to be a Hotshot, you need to first be willing to do backbreaking work in ridiculously dangerous conditions. Second, you need to understand that a fire isn’t just a big, hot thing to be put out. A fire is an opponent with its own goals and strategies. To defeat it, you need to set and adjust tactics accordingly. You need to wage war against it.

Eric Marsh (Josh Brolin) understands that. That’s why he’s a fire chief in Prescott, Arizona. However, despite knowing the terrain intimately, he’s in charge of a Type II squad, responsible for clearing debris and setting firelines that are away from the action. He yearns for more. His boss Duane Steinbrink sees his potential, and if Marsh’s team becomes certified Hotshots, they’ll be the first municipal Hotshot squad in the United States.

First, they need to pass an official evaluation, and that means beefing up the number of men on the team. One of the new recruits is Brendan McDonough (Miles Teller). His nickname is “Donut,” and as a local pothead who’s managed to knock up a local girl, he’s not exactly covering himself in glory. The team needs to perform perfectly. Should they take on a professional dipstick? Marsh’s second-in-command Jesse Steed (James Badge Dale) isn’t sure, but he’ll back his boss’ play. Christopher “Mac” McKenzie (Taylor Kitsch) is convinced that it’s a bad idea, and he makes it his job to make Donut’s life a living hell.

It turns out Donut isn’t the problem since Marsh ends up screwing the fiery pooch, so to speak. During their evaluation, Marsh decides to use a potentially risky tactic. He also acts like a mouthy jackass in front of the evaluator, which is fairly unhelpful. Despite all this tomfoolery, the guys get certified. Better yet, they come together as an effective team working a series of fires, including one where they manage to save a beloved local tree. It’s not without a cost, though. Marsh’s relationship with his wife, Amanda (Jennifer Connelly) is strained. Amanda knows that her husband’s job comes before her, and is understandably a little tired of that. Meanwhile, Donut is reminded of his absentee father, and he’s taking steps to do right by his kid.

Okay, there’s a little of that. The film is directed by Joseph Kosinski, who made Tron: Legacy and Oblivion. Both of those films are good looking, but as shallow genre exercises more concerned with looking slick than delivering a compelling story, they sure ain’t good. Kosinski has stepped away from terrible sci-fi, and I applaud that. He’s made a film that handsome and technically proficient. The firefighting scenes, particularly the climax involving Yarnell Hill, are genuinely anxiety-inducing. More importantly, it’s got heart. You can feel that Kosinski cares about these people and their story, and he lets things slow down in order to get to know the primary characters.

I’ll emphasize that again. The primary characters. The script by Ken Nolan and Eric Warren Singer is based on a very good GQ article by Sean Flynn, which you absolutely should read. Nolan wrote the screenplay for Black Hawk Down, and both films share a similar problem. We have a big group of guys that, for the most part, look pretty much the same and don’t have any defining characteristics. Is it realistic to give a team of 20 Hotshots and their families indelible character arcs and not have the movie be 15 hours long? Not at all, but I feel like I got a sense of less than half of the men on the team. We’re also told about the difficulties of the team getting certified, but we never learn about the specifics of that process. When it happens, it should make more of an impact. Where the script works nicely is in the gradual bonding of the characters, as well as showing us exactly how fires are fought. There’s more to it than just dumping a buttload of water.

It takes strong actors to make a clunky script work, and thankfully, that’s what we’ve got. Josh Brolin and Jennifer Connelly stand out. They have real chemistry and a feeling of two people inside a marriage that’s shifting, even though they play characters that could become dangerous cliches. Connolly has a scene portraying grief that sent chills down my spine. Miles Teller does good work, particularly in later scenes where he grapples with survivor’s guilt. The other standout is Jeff Bridges, and let’s talk about him for a moment. He’s a straight-up great actor. However…in recent years, Bridges has adopted an extremely annoying tic where he frequently sounds like Yosemite Sam recovering from a bad weekend in Tijuana. There’s a little of that here, but a scene where he takes a phone call might be some of his strongest acting in years.

Only the Brave is a little broad, a little uneven. Regardless, it’s a genuinely good film, one that effectively puts us in the boots of the Granite Mountain Hotshots. With wildfires demolishing swaths of California right now, this is the right time to consider the men who fight these fires, what their jobs entail, and what it can cost them.

Tim Brennan
Tim has been alarmingly enthusiastic about movies ever since childhood. He grew up in Boulder and, foolishly, left Colorado to study Communications in Washington State. Making matters worse, he moved to Connecticut after meeting his too-good-for-him wife. Drawn by the Rockies and a mild climate, he triumphantly returned and settled down back in Boulder County. He's written numerous screenplays, loves hiking, and embarrassed himself in front of Samuel L. Jackson. True story.
Tagged: eric warren singerjames badge dalejeff bridgesjennifer connellyjoseph kosinskijosh brolinken nolanmiles telleronly the bravetaylor kitsch