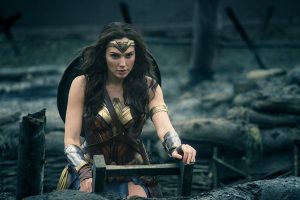 You know what the real difference is between the characters of Marvel and DC? Presentation.

Marvel’s heroes have feet of clay. They’re flawed and relatable. Peter Parker constantly worries about money. Tony Stark is essentially a functional alcoholic. If I gained fantastic powers or a power ring fueled by willpower, I’d still make lots of stupid mistakes and be plagued with self-doubt.

DC’s heroes, on the other hand, are mythic. Like the Greek pantheon, they have their flaws, yet everything about them is writ large. They’re icons, and to be really effective, they need to be treated as such. Up until a few years ago, mostly thanks to our good pal Christopher Nolan, there was an exceptionally annoying trend that superheroes needed to be “grounded.” Many creatives and studio executives were uncomfortable with the concept of costumed vigilantes and tried to sideline them whenever possible. That’s why you have development executives attempting to turn Daredevil into an extreme sports figure. That’s why you have Josh Trank making a Fantastic Four movie focusing on body horror. That’s why you have the creator of Ally McBeal making a legendarily appalling pilot for a Wonder Woman TV series.

Wonder Woman, as a character, has been a tough nut to crack. She was created in 1941 by William Moulton Marston, a psychologist, lawyer, and the inventor of the systolic blood pressure test, one of the components used in lie detectors.* It’s not surprising that, for a man so interested in uncovering secrets, he’d create a character laser-focused on truth. Marston once said, “The only hope for civilization is the greater freedom, development, and equality of women in all fields of human activity.” He believed that women were more advanced intellectually and morally than men.**

This concept was kind of a tough pill to swallow for a while, as evidenced by the character’s struggle to break out into the wider world. Sure, people knew who Wonder Woman was, mostly due to the only-in-the-1970’s-could-it-be-this-kind-of-cheesy television series. Ivan Reitman almost made a Wonder Woman movie, and Joss Whedon nearly did as well. It just never happened. Why? Part of it was that she never had a clean origin story such as murdered parents creating an obsession with justice. Moreso, the conventional wisdom was that most viewers wouldn’t want a strong female superhero central to the plot. Men wouldn’t accept it, and women didn’t care about big action films. Not so much the case, since at long last, Wonder Woman has been unleashed on theaters.

The First World War has been raging for years, but you wouldn’t know that on the secluded island of Themyscira. Created by the gods of Olympus, Themyscira is both the homeland of the Amazons and what looks to be a potentially terrific vacation destination. Diana (Gal Gadot) is the daughter of Queen Hippolyta (Connie Nielsen). She’s smart, strong, and extremely curious. Her mother loves her and wants her protected. Yet Diana is fascinated by her aunt Antiope (Robin Wright), Themyscira’s chief general and a fearsome warrior. So her aunt tutors her in the arts of war, and Diana is a quick study.

She’s searching for her purpose, though, and it seems her purpose finds her with the arrival of Steve Trevor (Chris Pine). He’s a spy working for the British, and with the Germans hot on his trail, his plane crashes into the azure waters surrounding the island. Diana saves him and, along with the other Amazons, absolutely kills the hell out of the attacking German soldiers. But do they send Trevor home with a firm handshake and a suggestion not to bother them again? They do not because Trevor tells Diana of the wholesale slaughter caused by the Great War. We can almost see the lightbulb go on over her head. It all must be caused by Ares, the god of war. If Diana can find him and bust a cap in him, metaphorically speaking, the war will be over and peace will return.

Trevor hears this and comes to the conclusion that Diana is hopelessly insane. However, she’s proven that she’s more than capable in battle and has relentless determination. So off they go, first to dreary old London where Trevor assembles his own ragtag team of howling commandos, then they head to the front. They believe that rogue General Ludendorff (Danny Huston) is planning to sabotage peace accords with an attack upon the English. Ludendorff’s chief scientist, the disfigured Dr. Maru (Elena Anaya), has developed a new and deadly gas, which you kind of have to expect when she has the nickname “Dr. Poison.”

A lot of things went right with this movie. That’s good because a lot of things needed to go right. One critical aspect is director Patty Jenkins. Her last film was Monster, way back in 2003. Since then, she’s done some TV work here and there, but nothing to rival her serial killer drama. Until now, that is, because Jenkins directs the holy hell out of this movie. Her action sequences are clean and exciting, if slightly too reliant on speed-ramping. She’s got an excellent contrast between shooting the drab grays of London and the European theater of war versus the bright colors of Themyscira. The scenes set in the Amazonian homeland are absolutely gorgeous, with the deep blue of the ocean, the gold of armor, and the rich browns of soil and beach. Jenkins is also excellent at capturing small character moments. Diana’s delight upon tasting ice cream for the first time, and telling the vendor, “You should be very proud,” is a wonderful bit. It was also a nice touch to have all the Amazons sporting Israeli accents to complement Gadot.

Another strong piece of the puzzle is the screenplay. Written by Allan Heinberg and from a story by Heinberg, Zack Snyder, and Jason Fuchs, the script is mostly strong in terms of characterization. I loved the scenes set in Themyscira, and lesser writers wouldn’t have portrayed the easy companionship and steely competence of the Amazons quite as well. The villains are undercooked and don’t have particularly compelling motivations beyond being evil. But I’m comfortable giving that a pass considering the script has a great sense of humor and some sly feminism thrown into the mix. It’s a story that’s well-told, but broad enough for everyone to enjoy, even Fox News.***

It helps that Wonder Woman is an exceptionally well-cast film. Connie Nielsen’s regal Hippolyta is great fun to watch, particularly when she’s verbally sparring with Robin Wright’s just as good Antiope. As Trevor’s secretary and aide-de-camp Etta Candy, Lucy Davis is a hoot. She only appears in a few scenes, but she’s a comic assassin, throwing out barbs with lethal precision. Chris Pine might be the film’s secret weapon. He’s got great chemistry with Gadot, and the two of them are endlessly charming. Plus, some of his line delivery is positively Shatnerian, and I mean that in the best possible way.

The fact is, this film rests solely on Gal Gadot’s shoulders. She’s been fun in the Fast and Furious movies, and she made a big impression in the misbegotten Batman v. Superman: Dawn of Justice. She proves without a doubt that she can carry a movie, and she’s now an honest to Zeus movie star. As Diana, she’s strong, brave, determined, and a relentless combatant. More importantly, she’s optimistic and compassionate. Too often, popular entertainment (and life) treats compassion as a weakness. Diana uses it as a weapon, a motivator to spur her on to stand up for others. Gadot comfortably inhabits the blend of strength, humor, and heart to create a hero that understands emotions aren’t a liability. She’s easily one of the most compelling superheroes to appear onscreen, and she shares the upper echelon with Christopher Reeve and Chris Evans.

Yeah, Wonder Woman proves that a superhero movie that’s directed by a woman and starring a woman can be a success. It stabilizes the ailing DC Cinematic Universe, which started with the pretty okay Man of Steel, ran into problems with the definitely not okay Batman v. Superman, and nearly burst into flames with the not even close to okay Suicide Squad. This is easily the best film based on DC characters since The Dark Knight, and it makes me feel leagues better about Justice League, which is being released in November.

Ultimately, that stuff doesn’t matter too much. Wonder Woman stands proudly on its own, and a frankly astonishing sequence of Diana crossing No Man’s Land alone pushes a fun blockbuster directly into iconic territory. While it’s not perfect, this film shows that summer movies can be smart, sophisticated, and have something to say. All it took was a group of women succeeding where men couldn’t. Typical.

***Guess I was wrong about that!

Tim Brennan
Tim has been alarmingly enthusiastic about movies ever since childhood. He grew up in Boulder and, foolishly, left Colorado to study Communications in Washington State. Making matters worse, he moved to Connecticut after meeting his too-good-for-him wife. Drawn by the Rockies and a mild climate, he triumphantly returned and settled down back in Boulder County. He's written numerous screenplays, loves hiking, and embarrassed himself in front of Samuel L. Jackson. True story.
Tagged: allan heinbergchris pineconnie nielsendanny hustondavid thewlisgal gadotlucy davispatty jenkinsrobin wrightwonder woman