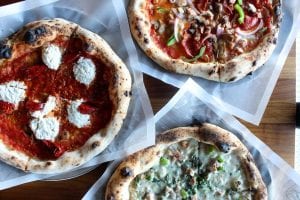 The Daily Meal has released the 2019 list of the 101 best pizzas in America. With 30 states making the list, Colorado had only one contender, and Pizzeria Locale was it. Hitting the 60th spot overall, the joint was praised for  “12 “Classics,” (eight red, four white), but you’re probably going to want to build your own from a selection of more than 25 toppings including eggplant, Calabrian chiles, corn, smoked mozzarella, pork meatballs and prosciutto.”

Best pizzas are chosen based on “a nuanced sauce, neither too sweet nor too salty (assuming that the pie has sauce); quality, well-distributed cheese (assuming that it has cheese); quality, sensibly combined toppings; a flavorful, savory crust; and, perhaps most importantly, a judicious, well-balanced and pleasing ratio of sauce, cheese, toppings and crust that maintains a structural integrity no matter the style.”

The site then chose chefs, restaurant critics, bloggers, etc. from across the nation to choose only from places that they have actually eaten. New York alone pulled in 28 of the best pizzas, with Illinois and California following close behind.

Pizzeria Locale also has two locations in Denver if you do not live in the Boulder area.