Home » Blog » Movies » Once Upon A Prom Night

Once Upon A Prom Night

I’m writing this from the great state of Colorado. During my life, I’ve spent time in Texas, Washington, Connecticut, Maryland, and traveled through most of the United States. While I’ve enjoyed a lot of America, I’m partial to Colorado. Can you blame me? Our climate is pleasant with lots of sunny days. We have a wide variety of culinary delights. Outdoorsy activities like skiing, hiking, and rock climbing are close by and plentiful. There’s not much to complain about.*

You know what I’m particularly fond of? Our state government frequently does smart stuff. One of my favorites is a program that provided low cost or free reversible contraception and intrauterine devices. That program caused teen pregnancies to drop over 50% during eight years, the teen abortion rate dropped by 64%, and it likely saved the state over $50 million in health care and public assistance costs. Pretty cool, right?

It’s gratifying to me that we’re too smart to fall for the abstinence trap. I suspect the main reason for that is a simple one. Policymakers know that as humans become teenagers, their hormones go nuclear. Teens are going to have sex, and no amount of prayer or scolding from adults will make it otherwise. 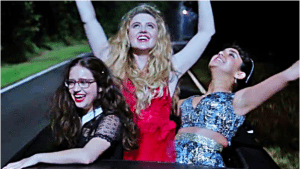 Having said all that, I’m sympathetic to parents. Who wants to imagine their kid doing…that? It’s easier to want to protect them, hermetically seal them until they hit 35. It’s easier, and it’s also poor parenting. Did you ever in your life think that a middle-of-the-road R-rated studio comedy could effectively make that point? Blockers does, and despite being uneven, its heart is in the right place.

We meet Chicago parents Lisa (Leslie Mann), Mitchell (John Cena), and Hunter (Ike Barinholtz) on the first day of elementary school for their young daughters. The three girls instantly gravitate to each other. The parents notice this and Hunter remarks that now that their girls are friends, the parents are all friends, too. He wants to get a drink, and Mitchell starts to cry. We learn this will happen often.

Years pass. Things change, and Prom Night arrives. Lisa is a single mom, and she considers herself to be best friends 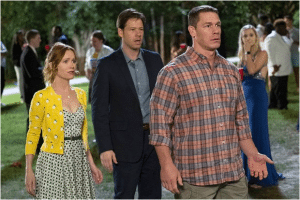 with her daughter Julie (Kathryn Newton). Julie loves her mom, but she feels a touch smothered. Besides, she has a detailed plan for the big night, and it involves losing her virginity with her boyfriend Austin (Graham Phillips). Mitchell’s daughter Kayla (Geraldine Viswanathan) is adventurous, and she wants in on what will become #SexPact2018. She’ll do the same with her date, the artisanal drug dealer Connor (Miles Robbins). Hunter’s daughter Sam (Gideon Adlon) loves her friends. She’s also a lesbian who’s still working through her feelings, and Hunter has cheated on her mother and has become very nearly a deadbeat dad. There’s kind of a lot going on with Sam, and she reluctantly signs on to the pact with her date, fedora-wearing goofball Chad (Jimmy Bellinger). 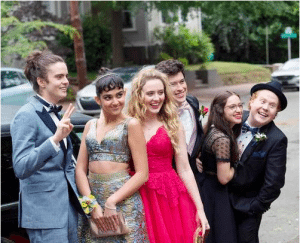 The girls and their dates tumble into a limo and head off for their rendezvous with debauchery. Unfortunately, a group chat is left open on Julie’s laptop. Through a clever scene involving the deciphering of emojis, the parents discover the pact. Mitchell and Lisa are horrified, and are determined to stop their girls from allegedly ruining their lives. Hunter thinks they’re overreacting, and he tags along to talk some sense into them.

From there, we have two parallel narratives. The first follows the teens as they hit the prom, an after party, and come closer to their moments of reckoning. The second follows the parents trying to track down their kids and getting up to assorted hijinks involving a butt-chugging contest (Seriously.), blundering into another couple’s sex game, and the reality of the Fast and the Furious movies.

Don’t let the trailer fool you. Despite a lot of language and an extended sequence where a plastic tube is jammed up John Cena’s ass, Blockers is highly inoffensive. In fact, I was surprised to see a teen sex comedy that takes the time to carry around some pretty smart and enlightened ideas. 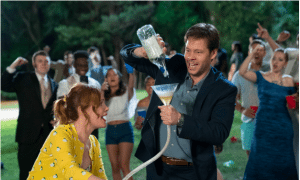 boys deal with when it comes to sex. In fact, sex is treated as a normal and healthy step on the way to adulthood, and it’s the parents trying to shut it down who are the real problem. Every parent wants to keep their kids safe, and we all walk a fine line between permitting too much and protecting too much. However, the script tries too hard to keep making things bigger and crazier. Comedy should have an ebb and flow, yet the Kehoes seem to be competing with the American Pie movies instead of concentrating on doing their own thing.

There’s also a serious problem with Blockers shifting tones so fast that you get whiplash. We go from real emotional honesty to gross-out scenes like the aforementioned tube stuck up the aforementioned ass to genuine wit to heart to heart scenes at what seems like 88 miles per hour. This is director Kay Cannon’s first film; she’s been the writer of the Pitch Perfect franchise as well as a writer on 30 Rock. Cannon is perceptive and knows comedy and timing but her tone is inconsistent and she was ill-served by a script that could have used one more draft.

Luckily, Cannon has a fearless cast that excels at wallpapering over the weaker moments. It seems like Leslie Mann has been playing supporting roles forever. She’s so sharp and so funny, I loved her as the lead and the film’s anchor. Sentient side of beef John Cena, much like Dwayne Johnson, is another wrestler whom we’re all shocked to discover is a good actor.** He’s got a real knack for comedy, and his timing is impeccable. Ike Barinholtz’s Hunter could be a one-note wisenheimer. While Barinholtz struggles a bit with some of his more emotional scenes, I liked that he attempted to drill down into his character. Attention should also be paid to Geraldine Viswanathan, and she just about steals the entire movie.

When it comes to comedy, Blockers isn’t reinventing the wheel. Tone is a problem, the script needed another pass, and it tries way, way too hard. That’s okay, because it is funny and it does have a perceptive point of view. If the comedy had been able to keep up with the sex-positive message, though, then we’d really have something to get excited about.

*Don’t get me started about our ridiculous housing costs, otherwise we’ll be here all day.

**How is this in any way surprising, though? Say what you will about professional wrestling, you have to have performative skills to sell the characters and conflicts. It’s just a different kind of acting, and one that’s underappreciated.

Tim Brennan
Tim has been alarmingly enthusiastic about movies ever since childhood. He grew up in Boulder and, foolishly, left Colorado to study Communications in Washington State. Making matters worse, he moved to Connecticut after meeting his too-good-for-him wife. Drawn by the Rockies and a mild climate, he triumphantly returned and settled down back in Boulder County. He's written numerous screenplays, loves hiking, and embarrassed himself in front of Samuel L. Jackson. True story.
Tagged: blockersbrian kehoegeraldine viswanathangideon adlonike barinholtzjim kehoejohn cenaKathryn Newtonkay cannonleslie mann