One of the worst clichés in the history of film is also one of the most accurate. I think you know it, and when I tell you what it is, your response will likely range between rolling your eyes indulgently and a desire to burn down your nearest movie theater and salt the earth. It’s when a filmmaker says, “I wanted New York/Gotham City/Oz to feel like a character.”

I know, I know, I can hear your chortling from here. That still doesn’t change the fact that it’s a true statement, though! Places have character. They can feel very distinctive. We’ve all walked into a building or across a patch of ground that felt relaxing or made us feel uneasy. Filmmakers will jump through fiery hoops to capture that sense of place.

When they do? You get a film like Psycho, where the Bates Motel feels forgotten and like a place where madness can quietly bloom. You get a film like The Wizard of Oz, where light, color, and joy positively pop around you in Munchkinland. It ain’t easy, and too often, we see movies that take place in gray corridors, generic cities, or CGI void spaces. 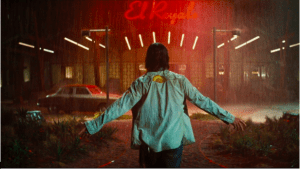 Now, imagine you’re a filmmaker who’s acutely aware of that pressure. However, since you apparently eat pressure for breakfast, you’ve made a film that’s mostly located in a single setting. You need to have a handle on how the place feels to both the audience and the characters. That’s been the challenge for Drew Goddard in his newest film, Bad Times at the El Royale.

A man (Nick Offerman) walks into the room of what used to be known as a motor lodge. He’s carrying an overstuffed bag. The door is locked, the shades are drawn, and he efficiently gets to work. He moves all the furniture to one side of the room, rolls up the carpeting, carefully pulls up a few floorboards, then deposits the bag underneath. The room is immaculately put back together.* He cleans himself up, waits, and is promptly murdered when another man arrives.

We’re informed by a title card that 10 years have passed. The day is bright and sunny, and we learn that the room is a part of the El Royale, a hotel kind of in the middle of nowhere. It’s located right in the border between California and Nevada and, to put it gently, the El Royale has seen better days. At least you can choose to stay in rooms located in either California or Nevada, though the California rooms are a dollar extra. Why? Because it’s California.

Guests start to arrive. They are:

The desk clerk is Miles (Lewis Pullman), who has a host of both savory and unsavory responsibilities at the El Royale and who may be more than he appears. From there, secrets will be unearthed, people will be blasted in half, and everyone will await the arrival of Billy Lee (Chris Hemsworth), a cult leader who is unfortunately exactly as he appears. We’ll get to that later, however.

You might be this far into the review and wondering to yourself, “What the hell, Tim? Halloween just came out! Why are we not talking about the exploits of everybody’s favorite William Shatner mask-wearing lunatic?” There are two reasons for that. First, it feels more appropriate talking about Halloween closer to Halloween. Second, the arrival of a new film by Drew Goddard is cause for celebration.

Goddard cut his teeth as a writer on Buffy the Vampire Slayer and wrote the scripts for Cloverfield and The Martian. His directorial debut was the very good The Cabin in the Woods, and like that film, Bad Times at the El Royale has a very distinctive sense of place. The set design alone is excellent. You can feel the echoes of the ring-a-ding-ding days of Sinatra, and the feeling that once upon a time, the El Royale was a place that hosted some epic bacchanalias.

You might also feel like it’s a shameless ripoff…I’m sorry…an homage of Quentin Tarantino’s stuff. I get it because both have talkative characters, fantastic music, surprising violence, and serpentine plots. This is yet another good news/bad news scenario. A decent amount of Tarantino’s work doesn’t exactly feel positive, and the good news is that Goddard has made a film that dwells in some dark places but eventually emerges in a more hopeful place. The bad news is that, from time to time, the pacing in this two hour, 21-minute film drags.

The screenplay was also written by Goddard, and I’ll tell you guys right now, you’re getting a lot of plot for your money. We find out the deep dark secrets of our guests, and even a few about the hotel itself.** Since we’re dealing with an ensemble, it’s highly entertaining watching these specific personalities bounce off of each other. In all fairness, the third act does more than take its time, it positively puts its feet up and leisurely sips on a glass of whiskey. Some 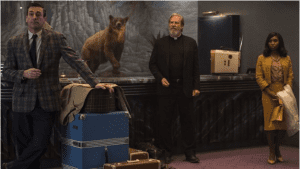 judicious cutting would have made a very good film into a minor classic.

By and large, the cast is excellent. Jon Hamm’s chatterbox salesman is entertaining, and I was pleased that Jeff Bridges (mostly) has put aside his tiresome marble-mouthed schtick and delivered a sneaky performance. The MVP here is Cynthia Erivo as Darlene. Not only does she hold her own with a professional like Bridges, but she’s also one of those actors I adore that does a lot by doing a little. You can see her listening, see the wheels turning in her head, and she’s very deliberate and disciplined in her choices. Plus, she’s got an astonishingly good singing voice.***

It pains me to say it, but the one weak link in the cast is Chris Hemsworth as Billy Lee. This character is supposed to be a sexy Charles Manson. He casts a long shadow through the film, and to pay it off, we need a performance that’s seductive and malevolent in equal measures. I’m not saying that Hemsworth can’t play a role like this, he just doesn’t 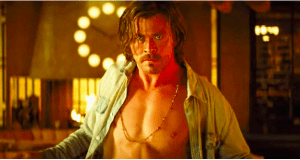 quite pull it off here. Everybody else in the cast feels like they’re inhabiting their characters, but Hemsworth is Acting. A younger Val Kilmer or Viggo Mortensen would have knocked this role out of the park.

The tragedy of Bad Times at the El Royale is that it’s likely going to flop. It’s competing with the twin juggernauts of the not-good-at-all Venom and the highly anticipated Halloween, and it also has a long running time and a story that doesn’t lend itself to an elevator pitch. That’s a shame because it’s a very good film that doesn’t deserve to be forgotten. There’s nothing else like it out right now, and this kind of careful and clever filmmaking should be celebrated.

*From the man who played Ron Swanson on Parks and Recreation, and who has his own woodworking business, I expect and appreciate this level of care.

**One question to consider after you’ve seen the film is, who exactly is the management, anyway?

***Considering she won a Tony Award for Best Leading Actress in a Musical for The Color Purple, maybe it’s not all that astonishing.

Tim Brennan
Tim has been alarmingly enthusiastic about movies ever since childhood. He grew up in Boulder and, foolishly, left Colorado to study Communications in Washington State. Making matters worse, he moved to Connecticut after meeting his too-good-for-him wife. Drawn by the Rockies and a mild climate, he triumphantly returned and settled down back in Boulder County. He's written numerous screenplays, loves hiking, and embarrassed himself in front of Samuel L. Jackson. True story.
Tagged: bad times at the el royalecailee spaenychris hemsworthcynthia erivodakota johnsondrew goddardjeff bridgesjon hammlewis pullmannick offerman