Home » Blog » Movies » My Wife Will Never See This Movie

My Wife Will Never See This Movie 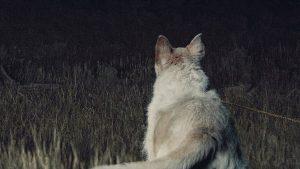 I made it through three seasons of The Walking Dead before I tapped out. Don’t get me wrong, I love zombies. I love survivalism. I particularly love stories about societal breakdowns and how people thrive or fail in a nihilistic new environment. The problem with the aforementioned television series is that it’s got one of the most repetitive narratives I’ve ever seen.*

Every season I’d seen was, thematically, exactly the same. Our plucky band of survivors searches for a safe haven and tries to avoid legions of cannibalistic ghouls. They inevitably encounter another group of people, inevitably have a “Can we trust them” conversation, and inevitably discover that as bad as the zombies are, Other People Are The Real Monsters. We are the walking dead, indeed.

If I’m wrong, please tell me so, but there are now seven seasons of The Walking Dead, and I assume the various showrunners have stuck to that formula. Great, bully for them. That series has had hours, nay, days worth of content exploring that basic theme. Trey Edward Shults’ second film, It Comes at Night, does the same thing, only better, and does so in a crisp 91 minutes.

It’s a horror movie, and like many horror movies, it begins with someone dying horribly. We see an old man vomiting blood, wheezing like a broken down engine. This is Bud (David Pendleton), and he’s been infected by a fast and lethal virus. He will not become a zombie. He’ll just die. Quickly. From the bits of information we can glean, this contagion has killed the majority of humans and animals. The survivors have fled into the wild, trying to do whatever they can to live.

Bud’s family loves him desperately, but they kill him while wearing gas masks, take his body into the woods, and burn it in a shallow grave. They have a system that’s worked pretty well so far. Living in a rambling old house in the midst of the woods, the father Paul (Joel Edgerton) has developed a few ironclad rules.

As you can imagine, all of these rules will eventually be broken. His wife Sarah (Carmen Ejogo) and son Travis (Kelvin Harrison Jr.) obey him, and Paul seems to be doing his best to keep the family safe. During one night, the family hears a commotion in the airlock room. They investigate, and Paul proceeds to beat the crap out of the intruder and tie him to a tree for good measure.

The intruder is Will (Christopher Abbott), and he explains he was scavenging for food and water for his family. He tells Paul that his family is in an abandoned house fifty miles away, they have nearly run out of water, and their situation is desperate. Will offers to trade food for water, and while Paul considers killing him to keep the existence of their home a secret, Sarah suggests bringing Will’s family back to their home. More people means better defenses, and Will’s wife Kim (Riley Keough) and young son Andrew (Griffin Robert Faulkner) are retrieved. Do they all live in harmony, creating a utopian society from which humanity evolves to a more enlightened state? They do not.

Let’s get something out of the way first. Don’t be fooled by the somewhat misleading marketing of this film. This is a horror movie, but there are no zombies, supernatural beasties, or nameless horrors from beyond the stars terrorizing the family. The horror comes from fear and paranoia. As people, that’s all we’ve ever needed to destroy each other. Writer/director Trey Edward Shults understands this and amplifies the undercurrent of dread with filmmaking that’s impressively atmospheric. Not since The Witch have I seen a film that makes the experience of being in the middle of nowhere feel so tactile. We can almost smell the trees, hear unidentified noises in the dark, feel like when the sun sets, the darkness could envelop us whole and leave nothing behind. While The Revenant used natural light sources and felt gimmicky, here, it feels unsettling. Yeah, there are a couple of jump scares and a couple of “It was all a dream…or was it” moments, but this film was produced by A24, and they’re a studio that’s gained a reputation for offering quality arthouse genre films.** Rest assured that you’re in good hands.

As a screenwriter, Shults is solid, though he’s a bit of an acquired taste. Some filmgoers are more comfortable having a strong understanding of exactly what is going on in the world of a movie and why. Those people will hate this film because Shults parses out the bare minimum of information. What caused the virus? What transmits it? What’s the current state of affairs in the outside world? We never find out, and with a couple of small exceptions, the action stays at the house and the surrounding woods. But it’s the lack of information, the feeling that all of Paul’s rules might be ultimately meaningless, that effectively enhances the horror. My advice is not to worry about the unanswered questions. Just let yourself feel what the characters are experiencing.

The performances are excellent across the board, with one truly impressive standout. As the 17-year-old Travis, Kelvin Harrison Jr. is the audience identification character. We learn about this hostile world through his eyes and we mostly stick with his perspective throughout the film. He’s a bright and curious young man, and in a different time, we could feel that he might have gone on to great things. But he’s coming of age in a dying world, and all that energy and youthful idealism might all be for nothing.

My wife can’t stand movies like The Mist or United 93, where there’s a feeling of intense inevitability regardless of the best intentions. By now, you’ve likely seen Wonder Woman, and you know what I mean when I say that it champions the idea that there’s always hope. It Comes at Night is the polar opposite of that film. Like an extinguished candle, it snuffs out hope, leaving only darkness.

**A24 is the same studio that did The Witch, Green Room, and Swiss Army Man. Their stuff isn’t for everybody, but they’re always trying something new.

Tim Brennan
Tim has been alarmingly enthusiastic about movies ever since childhood. He grew up in Boulder and, foolishly, left Colorado to study Communications in Washington State. Making matters worse, he moved to Connecticut after meeting his too-good-for-him wife. Drawn by the Rockies and a mild climate, he triumphantly returned and settled down back in Boulder County. He's written numerous screenplays, loves hiking, and embarrassed himself in front of Samuel L. Jackson. True story.
Tagged: carmen ejogochristopher abbottdavid pendletongriffin robert faulknerit comes at nightjoel edgertonkelvin harrison jrriley keoughtrey edward shults