Home » Blog » Airstream Camping » My First Week in an Airstream

My First Week in an Airstream

I’m having one of those days. You know. The ones where you wake up a week after making a really big life decision and you think, “Wait, what the fuck did I actually do?” Yep, one of those.

In May, I made the decision to buy an Airstream as my place of residence. Technically, this is not a legal move. As you can imagine, the government doesn’t like it, which means the banks don’t like it. They can’t put you in a box when you live on the road. To be an American, you must associate yourself to an address, which on the larger scale, associates you to both a city and state so that you can pay proper taxes. Ugh, so lame (almost as lame as the amount of taxes that I paid to the government last year as a small business owner…don’t get me started).

But, I’m not here to harp on government. Gawd knows we’re all lucky to live in a country where we can exercise our freedoms (let’s not debate this topic and say we did). 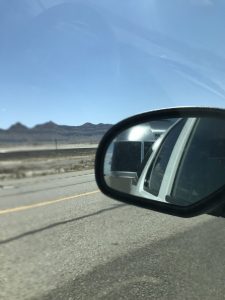 because I actually went through like a four-hour training at the dealership upon picking up my Airstream. If you know me, you know that I’m a total school geek (like cried because I got one B in high school amongst a sea of A’s). So, I was completely at attention for all four hours. If you follow me on Instagram, then you know that I passed with flying colors.

But, passing the “test” did nothing to prepare me for what I had in store (weird, this is the same reason that I left my life as a public educator). I stayed the night at the dealership to practice hitching up solo in the morning and getting the clear from my Airstream team to hit the road, which also meant then backing up solo into my driveway in Sun Valley. I was so impressed with myself. Until, I wasn’t. Yes, I remembered all the steps for hitching up properly. Yes, I backed her up perfectly into the driveway on my first try. But, upon unhitching, I also realized that I had drug the seven-way plug from Boise all the way to Sun Valley. Bitch was shaved in half, meaning I had driven for 150 miles without any brakes or lights on the 6000-pound beast that I was towing behind me. I also discovered that once the Airstream was no longer attached to my car that my gas tank jumped from a quarter of a tank to completely empty. Great. In an ideal world, I definitely run out of gas and am stranded on the side of the road with my trailer in tow (please read my sarcasm here).

I get her fixed ($100-repair-for-a-$10-part later) and I’m off to Colorado. I planned on stopping in Salt Lake City around midnight to break up the ten-hour drive, or what would normally be a ten-hour drive from Sun Valley to Basalt (it’s by Aspen, people).

I learned two things rather quickly in this first stint. One, I was going to go through about double the amount of gas than I normally do sans tow. Two, I was going to have to add about ten extra minutes to every hour that it would normally take me to get from point A to point B (basically, never getting above 70 mph, and that’s being really generous).

Parking overnight with a vibrant trailer is no easy task. For those of you who don’t know, it’s actually illegal to sleep in your car (or trailer) on city streets and in city parks. I opted to get off an exit and drive around in circles for thirty minutes to find a dark-ish parking lot (I also wanted to workout at the Pure Barre nearby in the morning, but of course, they were closed down, unbeknownst to me, and all of my work was for naught). I snuggled up for my first night at the nearby movie theater parking lot and promptly arose at 6am with the sunrise (this is becoming a normal thing).

I stopped in my hometown in Basalt, Colorado to spend some much-needed time with some of my favorite long-time friends. Fortunately, one of those friends has a lot of land and allowed me to bunk up trailers for the weekend (I’m learning that power hookups are everything). I’d also like to document that I backed all 23’ of my Airstream into one of the tightest spots you can imagine. Sharp turns. Fences. Items to avoid hitting – including, but not limited to – another trailer, cars, bikes, and a gigantic propane tank. Weather was damn near perfect, and I fell asleep every night with all my windows open, the cool breeze kissing my face as I snuggled little Nugget under the covers. In a word: bliss. 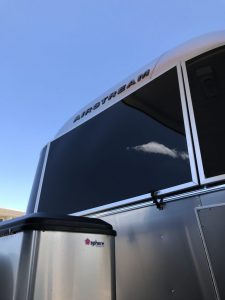 When I went through my to-go checklist, I had a stark realization. The back window was gone. Yes, gone. Like, no longer in existence (God rest its soul). The only thing I could gather was that it had blown off the day before when some strong winds had come through the valley. Immediately, I felt defeated. I knew that there would be a large learning curve in managing all the intricacies of a travel trailer, but I felt like I was failing. To be honest, I didn’t really maximize the Airstream to its full potential anyway while in Basalt because I was – and am (as I sit and write this) – still intimidated by using my water pump, dumping, refilling, cooking with the propane tanks on, refilling the propane tanks, showering, leveling out, keeping the batteries fully functioning, and yes, the list goes on.

I know that if I don’t make a habit of using all that the Airstream has to offer, I will never really get to experience it in all of its splendor. But, that doesn’t take away any of the self-doubt that I might just fuck something up by not “doing it” correctly. And, based on my experience, fuck ups usually cost money, money that I am, in a sense, trying to save by living more modestly.

So, yes, I felt defeated. I immediately got on the phone with repair shops in Denver to try and come up with the quickest solution (100 degree heat with an open window is not my idea of a good time). Most of the places spoke to me like I was a nuisance to their precious time (and, in hindsight, I should have called Airstream first, but I’ll elaborate more on their amazing customer service at a later date). On top of that, I did not have a campground set up in Denver and spent an additional hour calling every state and RV park on Google, only to be greeted by extremely disinterested personnel (Landa, I am still sorry for calling you Wanda). Fortunately, my brother and his girlfriend live in Denver and 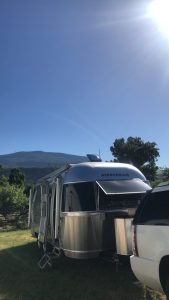 they generously let me pull an Uncle Eddy for the week, but I was confronted with my first experiences of that voice in my head saying, “Hey, this is going to be hard sometimes, maybe a lot of times. Are you sure you’re ready?” And, for a few hours longer than I’d like to admit, I answered, “No, I don’t know if I can do this. I don’t know if I’m really ready.”

This response is very much against my nature. I seldom admit to not being ready to do anything that I’ve set my sights on doing. So, yes, it was weird for me to be in this head space, but I also reminded myself that it was okay to be there. Consciousness is always my goal because, I’ve learned that, ignorance to consciousness only provides short-term relief even when that ignorance is masking a negative emotion. So, I made the choice to sit in it. I also made the choice to stay the course.

I didn’t buy an Airstream thinking that I would have everything figured out. I fully understood that I was picking a life that was simultaneously exciting and completely foreign to me. As some of the initial excitement fades, I’d be lying if I said that the fear doesn’t creep in a little more heavily every once in a while. Because, the unknown is scary. The unknown is uncomfortable. But, no one grows inside of comfort. I’m here for the gains.

Stephanie Kemp
Stephanie is a road warrior, adventure seeker, and brand builder. She grew up in the mountains of Colorado and after spending nearly a decade between the PNW and the east coast, she’s proud to once again be calling Colorado home. Well, home for now. Stephanie recently bought an Airstream with the intention of living a more minimalistic and nomadic lifestyle. After logging over 20k miles in her car last year, chasing rock faces in the summer and powder days in the winter, she realized that life could be a hell of a lot simpler if she could carry her house with her on these adventures. In 2017, she started her own marketing agency, Sleigh Creative, to take control of her freedom. As a freelance creative director and brand strategist, she spends a lot of days playing and even more nights working. In all things, be it work or play, she seeks to inspire people to the life of never settling. You can follow along with her journey on Instagram, @by.stephanieleigh, and through her self-titled personal blog.
Tagged: Airstreamfirst weekfour hour classGovernmentschooltaxes