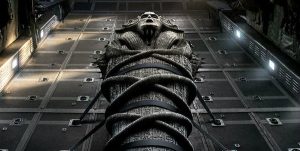 There’s a strong possibility that, up to the end of my days, I’ll be into monster movies. I thoroughly enjoy watching supernatural beasties fold, spindle, rend and mutilate a group of hapless nincompoops. Is it a sign of emotional immaturity on my part? Yeah, probably, but it still doesn’t change the fact that I’ll willingly duel anyone who speaks ill of An American Werewolf in London.

The cool thing is, monster movies don’t necessarily have to be scary. They can be comedic, like the beloved Tremors. They can be tragic, like King Kong. They can be action-oriented, like the enjoyably ludicrous Deep Rising. They’re a fairly elastic genre, and it’s a pity that we haven’t seen too many quality examples of late. I found myself wishing, not too long go, that we could enjoy a resurgence of monster movies.

People, I blame myself. For the Ancient Old Ones at Universal Studios heard my prayers. However, like the monkey’s paw, my wish was granted, though in a highly perverse fashion. Since the studios are run by loathsome business school graduates dedicated to profit above all, they have looked covetously at the multi-billion dollar successes of Marvel Studios. CEO’s have bellowed at hapless underlings to create their own shared universes, and researchers toiled into the night over intellectual properties the studios owned.

It turns out, creating a shared cinematic universe is harder than it looks. It took 4 movies for the DC Cinematic Universe to get on track. Warner Brothers tried and failed to kickstart a franchise with King Arthur: Legend of the Sword. Someone within Universal realized they owned the rights to a bunch of monster movies. Beginning in the 1930’s these films captured the imagination of the public. Perhaps the same thing could happen again, and Universal’s brilliant plan was to make a series of interconnected films about classic horror icons, under the Dark Universe umbrella. The Mummy is the first in the series. They are not off to a good start.

Nick Morton (Tom Cruise) is a dashing rogue, or so we’re told. He’s a military officer in Iraq, and along with his trusty sidekick Vail (Jake Johnson), he’s got a lucrative career as a looter of antiquities on the side. While the Uniform Code of Military Justice views looting as a serious enough offense to warrant a court martial, Nick’s superior Colonel Greenway is apparently unaware of this. Like a police chief in a 1980’s cop movie, Greenway just yells a version of, “Dammit, Nick!” and lets him do whatever he wants anyway.

Anyway, during a rollicking gunfight with “insurgents,” Nick and Vail discover a buried Egyptian tomb.* Just in the nick of time, archaeologist Jenny Halsey (Annabelle Wallis)** arrives to assist. There’s tension between Nick and Jenny due to a one night stand because of course there is. They explore the tomb and discover a sarcophagus containing Ahmanet (Sofia Boutella), an ancient Egyptian princess. We learn…deep breath…she was first in line to succeed her father, who was naturally the Pharaoh. But she got throneblocked when her dad’s second wife gave birth to a son. Ahmanet sells her soul to the god Set (!), who gives her a mystic dagger which she uses to slaughter her family. Just as she’s about to sacrifice her lover to give Set corporeal form (!!), the priests stop her, mummify her, and imprison her within a sarcophagus surrounded by mercury (!!!) so that she cannot escape.

There’s more plot. Sorry, guys. After Nick and company extract the sarcophagus, it’s placed on a transport plane headed for England. But Ahmanet has been awakened, and she uses her annoyingly ill-defined powers to possess Vail. He wreaks havoc and causes the plane to crash, killing nearly everyone on board. Heroically, Nick throws Jenny out of the plane with a parachute before his hot date with the ground. Only Nick’s not dead, you guys! He awakens in a morgue, surprised to discover that a) he’s not taking the big dirt nap, b) Ahmanhet has cursed him in order to use him as a new vessel for Set, and c) Vail’s ghost is appearing before him. Apparently, if you die and go to Purgatory, you’re cursed to walk the Earth and provide exposition to others. Now Nick must figure out a way to break the curse and stop Ahmanet from…ah….destroying the world or something?

I profoundly disliked this motion picture. If I went into all the reasons why we’d be here all day, so I’ll try to keep this brief.*** Let’s start with director Alex Kurtzman. Along with his frequent writing partner Roberto Orci, he made his bones as a screenwriter, and he’s responsible for writing The Amazing Spider-Man films, the first two Star Trek reboots, and a couple of Transformers movies. By and large, his stuff has been dumb but profitable, and since money talks and B.S. runs marathons in Hollywood, he was given the keys to a summer tentpole. This film has no time for foolishness like “character development.” Instead, we get an action scene, exposition, an action scene, more exposition, an even longer action scene, exposition, an All Is Lost moment and a final action scene. Roll credits. Like a mailman being chased by a rabid dog, the pacing positively rockets here. I suspect the thought was that if things moved quickly and the audience was distracted by Tom Cruise running, gunfire, Tom Cruise running, CGI mummies, and Tom Cruise running, the pyramid-sized plot holes wouldn’t be noticed.

Speaking of plot holes, the script was written by people who should know better. Hollywood veterans Christopher McQuarrie and David Koepp, along with newbie writer/actor/sacrificial lamb Dylan Kussman, have constructed a screen story that, like the mummies, is utterly soulless. Putting aside the charming sexism (Ahmanet kills people with her Death Kiss! Jenny is here to be rescued and tell Nick he’s a good person! Ah, progress…) for a moment, the characters are all one-dimensional archetypes. We have the Charming Rogue, the Wiseass Sidekick, the Brainy Love Interest, and so on. Even more so is the script’s shameless tendency to rip off other movies. Did I say “rip off?” I meant “homage.” No…I actually meant rip off. For example…

I could go on. You get the idea.

Nobody in the cast is terrible, nor are they particularly good. They just do what they can. On the one hand, I liked Sofia Boutella’s performance. The old Universal monster movies gave the beasties a little sympathy, and Boutella occasionally shows us a wounded woman behind the CGI and makeup. On the other hand…Tom Cruise. Say what you will about his religion, behavior, scandals, but the guy always, always gives every performance his all. You can feel him straining to singlehandedly pull the movie across the finish line. However, while Cruise is a better actor than he’s given credit for, he’s not great at portraying fear. He can do surprise, disgust, apprehension. Is it his Xenu-fuelled confidence that has erased the sense memory of fear from his life? Perhaps, yet there were a number of moments where he was meant to be scared, and it didn’t pan out.

At this point, in the last paragraph of the review, many critics would end with a pithy line like, “This mummy should have stayed buried,” and we’d all roll our eyes. Instead, I’ll say this. The Universal monsters gained notoriety because the filmmakers cared. They may have been making cheesy creature features, but they gave a damn. Watch the 1932 Boris Karloff version, and you’ll be treated to a moody atmosphere and an intense Karloff performance. Watch Stephen Sommers’ 1999 version, and you can feel a director giggling hysterically, in love with tombs filled with traps and desiccated creatures.  With this iteration of The Mummy, you can feel a multinational corporation creating a product that hopefully satisfies all four quadrants both domestically and internationally. Did they make a film they can be proud of and that will stand the test of time? No, but they created value for their shareholders.

*An Egyptian tomb in Iraq, you might be asking yourself? Yep. It’s a whole thing.

**You could play a pretty good drinking game with this movie. Anytime someone yells either “Nick” or “Jenny,” take a drink. The alcohol poisoning would probably kill you, but the alternative is watching this movie.

Tim Brennan
Tim has been alarmingly enthusiastic about movies ever since childhood. He grew up in Boulder and, foolishly, left Colorado to study Communications in Washington State. Making matters worse, he moved to Connecticut after meeting his too-good-for-him wife. Drawn by the Rockies and a mild climate, he triumphantly returned and settled down back in Boulder County. He's written numerous screenplays, loves hiking, and embarrassed himself in front of Samuel L. Jackson. True story.
Tagged: alex kurtzmanannabelle wallischristoper mcqurriecourtney b. vancedavid koeppdylan kussmanrussell crowesofia boutellathe mummytom cruise