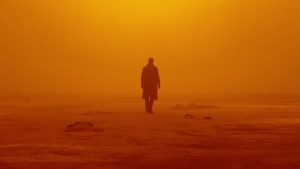 We live in an age of miracles. It doesn’t always seem that way, though. When a maniac opens fire on a country music concert and the citizens of our country are locked in an ideological battle, it can feel like we’re hurtling toward the abyss.

I don’t think we are. Not really, anyway. The miraculous surrounds us, we just have to remember to see it. When we think about the events of Las Vegas, we can’t help but be confronted by the numerous acts of heroism that inevitably overshadow the attack itself. When we consider politics, we have to remember that, as citizens, there’s vastly more that we agree upon than what divides us. Once in a while, we encounter a piece of art that, by all rights, shouldn’t work.

In 1982, Ridley Scott’s film Blade Runner was released. A fusion of sci-fi and noir, it took place in the distant future of 2019.* The film stars Harrison Ford as a blade runner, a killer of artificial people known as replicants. Scott brought us a vision of a retrofitted future, one that mused on the nature of humanity, and featured an absolutely godawful voiceover from Ford.

Released just a few years after the slam-bang space opera of Star Wars, audiences and critics didn’t know what the hell to make of Blade Runner. It underperformed a bit, and Pat Berman of Columbia Record called it “science fiction pornography.**” As time went on, it found its place as one of the most influential films made in the last 40 years. Naturally, there was talk of a sequel, and that talk caused film lovers of all stripes to quake in dread. A sequel is upon us now, called Blade Runner 2049, and I feel extremely comfortable calling it not only an excellent film in its own right but also superior to the original.

However, here’s where it gets tricky. Director Denis Villeneuve, along with the production team, has asked critics to go very easy in terms of plot explanations. One of the joys of this film is that its mysteries and secrets are gradually revealed as the story unfurls, and it’s done in a way that feels organic. Some of that information is legitimately important, while other bits of data are learned literally in the first few minutes.  Regardless, we’ll respect their wishes, since this isn’t a J.J. Abrams Mystery Box scenario where everything is pointlessly held back.

So what can I tell you? This film takes place 30 years after the first film. Ryan Gosling plays K, a blade runner in his own right. His job is to track down replicants that have gone into hiding and “retire” them. Like Harrison Ford’s Rick Deckard, K doesn’t entirely enjoy his job, and he wrestles with its larger implications. He’s thrust into a mystery, one that changes what we know about the world of these films. Harrison Ford does make an appearance, but it’s more of a very extended cameo, so don’t let the trailer and poster fool you.

K’s boss is Lieutenant Joshi (Robin Wright), all business and tough as nails. K also comes into contact with Niander Wallace (Jared Leto), an entrepreneur whose delusions of grandeur may be more than delusions. These people, and others, will force K to confront his own past and unearth hidden truths, which is a good thing since we’d have a boring as hell movie otherwise.

Let’s also get something important out of the way now. Clocking in at a stately two hours and forty-three minutes, Blade Runner 2049 is not a fast-paced action flick. This film is nearly exactly as long as it needs to be, but while it’s jam-packed with frankly astonishing CGI and imagery, it’s not loaded with chases, gunfire, fistfights, and explosions. All of that stuff does make an appearance. Like the original film, this is less about a relentless plot and a little more about mood and character.

That’s good! If you’re going to have a sequel to one of the most influential sci-fi films ever, it’s important to have a visual language that’s complementary to the original without being slavish. With Denis Villeneuve directing, we absolutely get that with hypnotic sequences of future-noir. Villeneuve ups the ante by knowing when to use color for maximum impact. A desert of blazing orange. Ruins with contrasting patterns of white and gray. Along with the legendary cinematographer Roger Deakins, Villeneuve has made the most visually stunning film of the year, if not the decade. Just about every shot from this film would make highly respectable wall art.

If you’re worried that this film will be a gorgeous and empty film like Passengers, don’t be. The script is co-written by original Blade Runner writer Hampton Fancher and Michael Green. It doesn’t merely ask probing questions about memory, how we relate to the past, and how it informs our humanity, it’s also a cracking good mystery. For the last several years, Hollywood seems to have forgotten how to tell a compelling whodunit, and too often a tidy narrative where the parts fit together is the least important aspect. Fancher and Green’s script does feel a little samey compared to the original. There’s a taciturn protagonist, a brilliant scientist involved in manufacturing replicants, and a fight between a regular guy and a physically imposing opponent. This isn’t a situation like Star Wars: The Force Awakens, where we’re faced with basically a remake of the original. Here we have similar concepts that instead spin off into interesting new directions.

Villeneuve continues his track record of getting excellent performances from his cast. As K, Ryan Gosling initially plays the role as a handsome blank, but we begin to see curiosity, panic, and anger leaking out of the facade. He’s complex, thoughtful, and gives one of the best performances of his career thus far. Jared Leto, who can be an…um….acquired taste as actors go, nicely underplays a role that could have gotten very obnoxious very quickly. Even Harrison Ford, who has been known to be afflicted with the disease brucewillisococci*** from time to time, has a sparkle in his eye and a spring in his step. He’s engaged and a little playful. Supporting roles by Dave Bautista, Ana de Armas, Sylvia Hoeks, and Barkhad Abdi are vivid and intense.

I know how you might have felt. You heard about Blade Runner 2049. You came to the not unreasonable conclusion that this was one more pathetic attempt for Hollywood to create another franchise or mine another intellectual property. I get it, but this film isn’t that. So much could have gone wrong due to commerce, cowardice, or simple apathy. Instead, we have a film that’s made with exquisite care and intelligence. In the year 2017, that’s a miracle any way you slice it.

*We’re two years away from the events of Blade Runner and there are still no flying cars. Get on that, people.

***This condition tragically afflicts film actors, and it causes a condition in which it’s impossible to predict whether a performer will be emotionally engaged in a role or simply sleepwalk through it to collect a paycheck.

Tim Brennan
Tim has been alarmingly enthusiastic about movies ever since childhood. He grew up in Boulder and, foolishly, left Colorado to study Communications in Washington State. Making matters worse, he moved to Connecticut after meeting his too-good-for-him wife. Drawn by the Rockies and a mild climate, he triumphantly returned and settled down back in Boulder County. He's written numerous screenplays, loves hiking, and embarrassed himself in front of Samuel L. Jackson. True story.
Tagged: ana de armasblade runner 2049denis villeneuvehampton fancherharrison fordjared letomichael greenrobin wrightroger deakinsryan gosling