As film critics go, I’m incredibly lucky. The fine people that run the website you’re reading have, for good or ill, given me enormous flexibility. I can see whatever I want. I can, within reason, write whatever I want. The decision for every week’s topic rests in my hands, God help us all.* 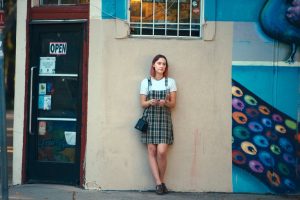 Some weeks, it’s a no-brainer. If there’s a gigantic blockbuster opening that’s dominating the weekend, I’ll see that. Other times, a few potentially interesting films open against each other, and I have to make a snap decision to only review one. Still other times, I’ll desperately want to talk with you guys about a particular film, but it simply isn’t playing anywhere close by.**

Once in a while, I’ll see a film not because I want to, but because I feel I need to. These kinds of films seem to be critical darlings, and they need to be viewed to stay up to date. Sometimes they’re blatant Oscar bait, and I’m compelled to dutifully trudge to the theater, sigh, and watch the friggin’ thing. I think of these as Eat Your Damn Vegetables movies, like Scent of a Woman, The King’s Speech, or Reservation Road. Over time, my instincts have gotten pretty good in terms of sniffing out EYDV movies.

But not always. Sometimes I’ll slump in my seat, the lights will go down, and some serious cinematic magic will get laid on me. It forces me to expand my horizons a little bit more, and feel a little shame at almost passing it over. Lady Bird is precisely one of those films, and while I didn’t love it, I can see how someone else would.

We’re introduced to Christine McPherson (Saoirse Ronan). She’s a senior in a Catholic high school, and, like nearly every other teenager to walk the Earth, she’s spectacularly self-absorbed. So much so that she proclaims her new name to be Lady Bird, and tells anyone who will listen that her home of Sacramento is a barren cultural wasteland. Her goals are passionate, if a little vague. “I want to go where culture is, like New York, or Connecticut, or New Hampshire. Where writers work in the woods.”

How exactly is she going to make her dreams a reality? That’s where things get tricky. As a student, Lady Bird is smart, but she’s got grades that are a half-step above mediocre. Can she buy her way into college like generations of wealthy idiots? Nope. Her mother is Marion (Laurie Metcalf), a nurse who’s always tired, always working, and perhaps a smidgen passive-aggressive. Her father is Larry (Tracy Letts), a sweet and soft-spoken programmer who’s been laid off and battles depression. Their home is small, modest, and like many of us, there’s never quite enough money available to move forward.

None of that really registers with LadyBird, though. She’s navigating school with her friend Jules (Beanie Feldstein), a sharp young woman with a crush on her math teacher. There will be romantic entanglements with both the amusingly pretentious Kyle (Timothee Chalamet) and theater aficionado Danny (Lucas Hedges). Lois Smith appears as a perceptive nun and Stephen Henderson as an enthusiastic theater teacher.

Lady Bird is a coming of age film, which also means it’s a little light in terms of plot. I don’t mean for that to come off as snide, because we’re watching a group of specific people live their lives in a specific time and place. It takes place during 2002, and we occasionally see television footage of the beginning of the Iraq War and hear about the crumbling Bush economy.

This is Greta Gerwig’s directorial debut. She’s been a part of the independent film scene for a long time, long enough to learn the mechanics of storytelling and efficient filmmaking. Independent film in the last few years can be somewhat of a chore, with sluggish pacing, pretentious screenplays, and mumbled dialogue becoming annoying trademarks. Gerwig is too smart to fall for that nonsense, and her film is wonderfully paced. She knows just when to slow down for character beats or to let the story breathe, and when to sprint through moments of comedy.

Gerwig also wrote the script, and her writing reminds me a little of Diablo Cody or Albert Brooks. She has a very specific voice, and while some lines don’t sound like the kind of things real human beings say, it doesn’t matter. The story is semi-autobiographical, and you can feel the specificity of certain events filtered through her perspective. Gerwig is also an absolute rock star in terms of nailing character. The main and supporting characters all have their own arcs, their own peculiar quirks that make them feel like individuals instead of stock characters.

It’s been said that one of the best skill sets a filmmaker can have is casting. Gerwig’s cast is on point here, 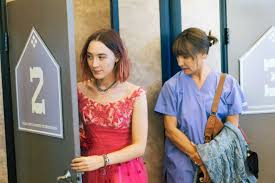 and while I could easily write another 800 words about them,*** there are two performers that blew me away. Beanie Feldstein has been doing TV for the most part, and it’s only in the last couple years that she’s stepped up to movies. She’s a hell of an actor, and her Jules is bright, bubbly, a little nerdy and very charming. There’s a scene with her chatting about nothing with Lady Bird while casually snacking on communion wafers, and her energy is infectious. Odds are good that she’ll become a pro like Laurie Metcalf. Metcalf is the very definition of a professional, and she can play literally anything. As Marion, there’s a quiet desperation at work in her performance. She’s constantly doing whatever she can to keep the family afloat, and also runs into growing frustration with her daughter. Marion feels like a real person, and I’d love to see Metcalf nominated for Best Supporting Actress.

Speaking of the Oscars, one of these days Saoirse Ronan is going to win one. She’s played the daughter of a government operative in Hanna, a chocolatier in The Grand Budapest Hotel, and she has an uncanny ability to pick quality projects and push herself as a performer. As Lady Bird, she’s selfish, kind, impulsive, cautious. Her character is large and contains multitudes. At one point she flatly declares that, “the learning part of high school is over.” We’ll see her learn about real friendship, sex, family, and a dawning self-awareness. Lady Bird grows and changes throughout the film, but in a way that’s natural and methodical. When it comes to performances, this is how it’s done.

There are parts of the film that feel a little meandering and episodic, and perhaps the script could have been fine-tuned a little. I didn’t love Lady Bird, but I am awfully fond of it. This film isn’t for me, but it doesn’t have to be. Someone out there is going to see this film for the first time. Its heartfelt, goofy, and ever-so-slightly twee wavelength will seem to be made just for them, and they’ll fall passionately in love with it. That’s what good filmmaking is supposed to do.

**Hence my lack of a Brawl in Cell Block 99 review. I’m still bummed about missing that one.

Tim Brennan
Tim has been alarmingly enthusiastic about movies ever since childhood. He grew up in Boulder and, foolishly, left Colorado to study Communications in Washington State. Making matters worse, he moved to Connecticut after meeting his too-good-for-him wife. Drawn by the Rockies and a mild climate, he triumphantly returned and settled down back in Boulder County. He's written numerous screenplays, loves hiking, and embarrassed himself in front of Samuel L. Jackson. True story.
Tagged: beanie feldsteingreta gerwiglady birdlaurie metcalflois smithlucas hedgessaoirse ronanstephen hendersontimothee chalamettracy letts