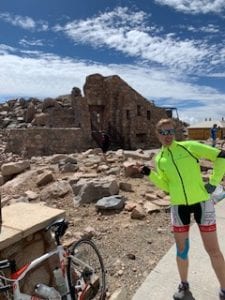 Lookout Mountain is benignly described as a “7,377-foot (2,249 m) peak located in Lookout Mountain Park, 1.7 miles (2.7 km) west-southwest (bearing 245°) of downtown Golden.” This seems like an understatement because over the last few years, this “7,377-foot peak” has turned into a beacon for me that outshines even the antennae farm on its crown that beams out signal to my countless screens.

My first memory of Lookout is a bland mental snapshot from a family vacation—my dad has a thing for the romanticized history of America and our family vacations in the ol’ Toyota Camry were to ALL the  landmarks: Little Big Horn, the Cody Museum, Gettysburg, the Alamo, the Cody Museum, Graceland, the Grand Canyon, the Cody Museum, and, of course, Lookout Mountain, where Buffalo Bill Cody is buried. You can guess who my dad’s favorite character in American history is. What I remember most about Lookout is that I was angry or something at my sister for any and all of the unknowable adolescent-sibling reasons, the specifics of which I cannot currently recall. I might have been crying about it. Family vacations are fun! I didn’t think much about the final resting place of the great and problematic showman for another two decades or so.

Fast-forward 20 years and I was madly in lust with a road cyclist who had a fetish for biking uphill, which I thought was more than a little masochistic but was totally willing to embrace if it would get him to embrace me. He considered the switchback route up the face of Lookout to be the most important landmark in the American West, up to and including the Cody Museum. He and my dad had their differences. I squeezed into my spandex and vainly tried to flog my rustbucket bicycle up the mountain, trailing behind him farther and farther until I was performing this unnecessary act of self-flagellation completely alone. It was hard. Harder than I thought it would be. Harder that I thought it *could* be. I was definitely crying about it. Riding bikes is fun! At the top of the mountain, when I FINALLY got there, I discovered that my rear tire had been flat for the whole trip.

The road cyclist and I biked up Lookout dozens of times over the next couple of years. I got a new bicycle. For my birthday, one of those years, I cycled up it alone for the first time. It was far easier than it had been on my initial ascent, although still really hard. Doing something hard, alone, seemed like the thing to do on your birthday at the point in your life where you start to realize that you won’t achieve all the things you dreamed about, and the things you do achieve will turn out to be very different than you thought they would be, and that’s mostly okay. It was a good ride.

The road cyclist and I broke up and I kept cycling up Lookout. I didn’t really know why. It was something to do. Something really hard to do AND something that I knew I could get through. I suppose some part of me was still trying to connect with the thing he loved and also the physical difficulty felt purgative of the pain of separation. It made the agony physical instead of just emotional. A few months later, my house was robbed and my road bike that I’d ridden with the road cyclist up and down Lookout and across the country was stolen. I cried an awful lot about that, and it wasn’t really about the bike.

I didn’t ride for several months, mostly because it was winter but also because I didn’t have a road bike. I can see the antennae farm from my front stoop, and I spent a lot of time that season gazing in solitude towards the West and contemplating when I might climb that steep stretch again. I knew it wouldn’t bring my partner back, but embracing the severity and reward of the climb was a gift from the relationship that endured. It still seemed like the thing to do.

I started biking again in the spring. I still didn’t have a road bike; I was borrowing one from a friend that I’d met through the road cyclist. The friend and I started biking up Lookout every Monday and then eating a Bonfire Burrito  afterward. It wasn’t the same as being in a long and loving relationship, with good food, good sex, and good cycling, but it made Mondays nicer. A couple of times, I saw the road cyclist doing the same route. The first time I saw him, I thought he would maybe pause at the peak, to say hello when I caught up to him. He didn’t, and after that, even though I still secretly hoped that he would, I never expected him to. This is the part where you realize that you won’t achieve all the things that you dreamed about. This is hard. Harder than I thought it would be. Harder than I thought it *could* be. 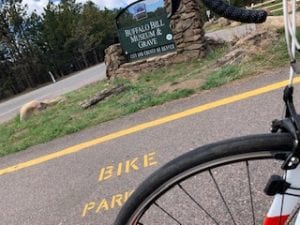 The bike-loaning friend and I started biking up Lookout not just once, but in loops. Sweat up to the top, fly down to the bottom, sweat back up to the top again. We figured if we could do four laps, we’d have the endurance to climb Mt. Evans on the bikes, too. We were right. It was really hard, but not as hard as I thought it would be. Near the summit, there were herds of mountain goats and bighorn sheep. The air was thin enough that I felt like I was at the bottom of a stiff martini and the endorphins added a chaser of bliss. Goats! Bikes! Vistas!…Sheep!

As the wildfires have ravaged the West this summer, I’ve often looked westward to see if I can see the towers on top of Lookout. Some days I see them just fine. Other days, the smoke obscures everything and my lungs burn even without the exertion of a climb.

I biked up Lookout, with the Monday friend, on August 31, my birthday. It seemed like the correct way to celebrate my birthday and to end the summer of 2020, with smoke thick in the air and indoor/interpersonal pursuits abolished for who-knows-how-long. I’d spent the season training up and down Lookout’s hairpin turns and gauging my abilities by its fierce measure. I didn’t tell the friend that it was my birthday, but I got exactly what I wanted: an act of closure for the season, a workout, a time with a friend, a great burrito.

It’s likely that I won’t make it back to Lookout again this season—too much else on my plate to keep training after the season finale. But I’ll stand on my front stoop every evening and look towards it, even as the infernos of a pandemic and police brutality and political ratfuckery rage on. I can mask, and march, and vote (and I do), but this is still harder than I thought it would be. Harder than I thought it *could* be. I definitely cry about it. I hope that someday I’ll be able to climb Lookout again, look down from the pinnacle, and take a deep breath to say and really believe “This is something really hard, but something that we can get through.”

Jessie Hanson
Jessie Hanson lives and works in Denver and couldn't be happier about it. Like the best-possible kind of Jekyl-and-Hyde scenario, she splits her life between science and storytelling. During the day, she performs clinical diagnostics and messes around with test tubes. At night, she performs behind the mic as a standup comedienne, in the air as a circus aerialist, and in rhinestones as burlesque dancer. She begrudges the hyper-inflated cost of a decent pair of false eyelashes. When she's not on stage, she sweating it out as an endurance athlete in triathlons and marathons across the West. She begrudges the hyper-inflated cost of a decent pair of running shoes. She's thrilled to be on board with OnDenver and writing about science, comedy, circus, athletics, and general fun on the Front Range!
Tagged: bikescyclingLookoutWestwildfires