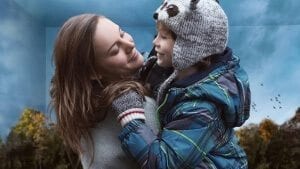 On January 9 of this year, my nephew was born. He came into this world under less than optimal circumstances, having been born prematurely. At 4 pounds, 7 ounces, he’s a tiny little thing, and he’s currently well-cared for in the NICU. He arrived a little early, but he’s a strong boy.

I know beyond a shadow of a doubt that he’ll be raised right. Considering the caliber of people that his parents are, how could he not be? What I don’t know, but can only imagine, is how they felt during the first few days of his life. Watching him hooked up to all manner of medical contraptions. Not having the simple ability to just pick him up whenever they want. To say it must have been highly stressful would be a gross understatement.

But his parents have learned one of the elemental lessons that all parents know. Part of being a parent is knowing how to roll with it, how to improvise, and how the bond between parent and child trumps even the worst situation. Lenny Abrahamson’s astonishing film Room examines that dynamic with intelligence and sensitivity.

We meet Jack (Jacob Tremblay), an inquisitive and sweet child celebrating his 5th birthday. He’s celebrating it in Room, an 11 foot by 11 foot living space that has everything he thinks he needs. He has a cheap TV, a couple of rickety chairs, a wardrobe, and a modest bed. The only window is a skylight. The only door is one that can be opened with a computerized lock. He lives there with Ma (Brie Larson), a young woman of considerable ingenuity and a boundless love for her boy.

There are two things Jack doesn’t fully understand. First, he doesn’t understand that he and his mother are being held captive in a modified garden shed by Old Nick (Sean Bridger) and that his mother has been held a prisoner for seven years. All he knows is that he has to hide in the wardrobe when Old Nick comes for “visits,” and that supplies are occasionally dropped off. Second, at a younger age, Jack was taught by Ma that the entirety of the world is Room. Everything outside it is outer space. Everything he sees on TV is make-believe.

After a physical altercation with Old Nick, the heat and electricity to Room are turned off. Ma knows that, as Jack gets older, he becomes more curious. She also knows that Old Nick is becoming more dangerous and one way or the other, time is running out. She has an escape plan, and Jack is the key. I won’t spoil how it plays out, but I will tell you that it’s a success.

From there, Ma (whose real name is Joy) and Jack must learn how to readjust to the wider world. They are taken in by Joy’s mother Nancy (Joan Allen), and her new husband Leo (Tom McCamus). Joy’s father Robert (William H. Macy) is also there, and he is unsettled to learn that he has a grandson. Joy comes to understand that being free and feeling free are two entirely different things while Jack begins to explore his expanded universe.

Room is a perfect little jewel of a movie, and there are so many ways it could have gone wrong. A hacky writer slavishly following the rules of screenwriting could have jacked up the melodrama. A sleazy director could have tried to make it more of a thriller and focused on the terror. An egomaniacal actor could have tried to hijack the movie with a showy performance. Thankfully, none of these things came to pass. Don’t misunderstand, there are some deeply unsettling sequences. There’s also a very fine line between intense emotion and melodrama.

Part of the genius of the film is how everything feels very understated and natural. Director Lenny Abrahamson wisely keeps the focus on Jack, for the most part. Even during thrillingly directed sequences like the escape from Room, where the impressive cinematography of Danny Cohen and editing of Nathan Nugent are on display, everything is in service to the story itself and the tone. He never shows off to the audience,* and he knows when to go big and when to rein things in. It’s so impressive to me that he’s able to take a claustrophobic area and make it feel spacious.

The film is based on Irish-Canadian writer Emma Donoghue’s 2010 novel, and she also wrote the screenplay. Her story isn’t precisely inspired by the Jaycee Dugard abduction or the Austrian Fritzl case, but it contains aspects of them. It’s a larger story, unbound by nationality, about trauma and the healing process. Donoghue treats her characters as real people, instead of plot devices, which is why their behavior feels so honest and real.

The outstanding cast is the third reason for the film’s success. While William H. Macy only has an extended cameo, and his casting as an emotionally weak man is a little too obvious, he says and does so much with so little. Tom McCamus’ Leo is a fundamentally decent man, and he provides Jack with his first positive male role model. As Nancy, Joan Allen is excellent, as usual. She underplays, but does it effectively, and she’s the secret weapon in most films that she appears in.**

But the film would fall apart without Jacob Tremblay and Brie Larson. You know how most child performances in movies feel forced? They’re too mannered, too precocious. Tremblay’s Jack is an utterly normal kid. He’s not a collection of acting tics or an adult in a boy’s body. Instead, he gives one of the most natural and convincing child performances I’ve ever seen, and it’s easily on par with Quvenzhane Wallis in Beasts of the Southern Wild.

As Ma, Brie Larson is up for an Academy Award for Best Actress. If there is any justice in the world, she’ll win, since her performance stands above the other admittedly impressive nominees. While in Room, Ma always has one eye on Jack, and the other looking for any opportunity to escape. She constantly tries to be her son’s rock, but after the escape, she regresses into a petulant teenager. She’s like a fist that has been clenched too long, and can’t stop shaking.

For a film of its modest size, Room asks big questions. How can a child survive and thrive under nightmarish circumstances? What happens when a child starts to outgrow their need for their parent? What factors shape the growth of a person? Questions like these and others are ones that the film grapples with, and that all parents will be confronted by. Ultimately, all that matters is the bond between parent and child. Over time, that bond stretches and changes, but it’s always there, in one form or another. My nephew and his parents have that, and I couldn’t be happier for them.

**Even in something as loony as Face/Off, Allen takes her little part of the film and keeps it real. That woman is a national treasure.

Tim Brennan
Tim has been alarmingly enthusiastic about movies ever since childhood. He grew up in Boulder and, foolishly, left Colorado to study Communications in Washington State. Making matters worse, he moved to Connecticut after meeting his too-good-for-him wife. Drawn by the Rockies and a mild climate, he triumphantly returned and settled down back in Boulder County. He's written numerous screenplays, loves hiking, and embarrassed himself in front of Samuel L. Jackson. True story.
Tagged: brie larsonemma donoghuejacob tremblayjoan allenlenny abrahamsonroomsean bridgerstom mccamuswilliam h. macy