Living Your Own Rom-Com 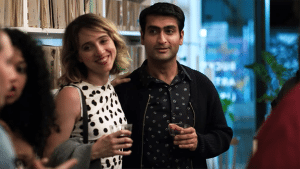 “So how did you guys meet?”

If you’re in a relationship with someone, odds are you and your significant other have been asked that. To me, that anecdote is endlessly fascinating. The twists, turns, and seemingly random occurrences that bring two people* together can seem fated in retrospect, or like an enormous cosmic joke, depending on how things turn out. I love hearing those stories.

Why? Maybe it’s because as I’m getting older, I find myself becoming more sentimental. As a cynical twentysomething, I would have scoffed at the idea of romance, rolled my eyes so effin’ hard at those awww moments. As a fortysomething, I’ve tried to put away that youthful posturing and honestly embrace those mushy moments. Being married helps with that.

But not every anecdote is worthy of becoming a movie, and not every story has the ability to affect us across a wide spectrum while remaining proudly specific. Kumail Nanjiani and Emily V. Gordon met and fell in love under what one could comfortably call extraordinary circumstances. These circumstances became the excellent film, The Big Sick, and we are all better for it.

Kumail plays himself, a young Pakistani-born man, whose family has settled in Chicago. He’s not exactly setting the world on fire during the day as an Uber driver. Nights are spent as a stand-up comedian and in a low-key kind of way, he’s got potential. During one of his sets, a young woman heckles him good naturedly. This is Emily (Zoe Kazan), a grad student with plans to become a therapist. They have a drink together after the show and go back to Kumail’s apartment to watch Night of the Living Dead. As so often happens when two people watch Night of the Living Dead, they spend the night together.

Afterward, they both insist it was a one-time thing. Maybe not, since they’re both obviously nuts for each other. Emily and Kumail fall into an awkward and sweet courtship. Emily feels weird about pooping in his bathroom. Kumail enthusiastically shows her his favorite movie, and Emily responds with, “I love it when guys test me on my taste.”** All would be right in their world, were it not for one tiny snag. Kumail’s mother Sharmeen (Zenobia Shroff) and father Azmat (Anupam Kher) are eager for him to get married. Arranged marriage has worked out nicely for his brother Naveed (Adeel Akhtar), and there’s no reason it shouldn’t be just as successful for Kumail. During family dinners, a string of young Pakistani women “just happen” to drop by, and Kumail has a cigar box filled with photos of his prospects.

Kumail’s family don’t know that Emily exists. If they did, he fears they would disown him for rejecting their cultural traditions. Turns out it’s all academic when Emily finds his cigar box. She’s understandably pissed and drops him like a bad habit. That would be the end of that, were it not for another snag. Strangely, Emily gets severely ill. So much so that her team of doctors recommends putting her into a medically induced coma. Kumail is put into the uncomfortable position of notifying Emily’s parents, Beth (Holly Hunter) and Terry (Ray Romano).

Things get more complicated as Beth and Terry try to work with the doctors to get to the bottom of Emily’s malady. They know all about Kumail and expect him to buzz off. He doesn’t. As she lays there, unresponsive, he begins to realize he might be in love with her. Yet he’s got to get into the good graces of Terry and Beth, as well as reconcile his own parents’ expectations for him.

Guys…I loved this film. Absolutely adored it. Not just because it’s pound for pound the funniest movie I’ve seen this year, and has easily the best joke about 9/11 I’ve ever heard. Not only due to the very real and genuine chemistry between Kumail Nanjiani and Zoe Kazan. The Big Sick is a movie that’s confidently itself, and every aspect from acting to direction to writing works in harmony.

Some directors would be tempted to put their own stamp on this story, which would likely make it too twee, too tragic, just too much. Michael Showalter is smarter than that, and he knows to get out of the way of the script. You’d expect that, since he’s also an accomplished writer who worked with The State and co-wrote the classic Wet Hot American Summer. While his direction doesn’t call attention to itself, it is subtle and sophisticated.

The screenplay by Kumail Nanjiani and Emily V. Gordon is rock-solid. Their characters drive the plot, instead of the other way around. Kumail is constantly grappling with his Pakistani heritage and struggling between the devout Muslim beliefs of his parents and his potential agnosticism. While we want him to end up with Emily, we don’t necessarily want that at the expense of his family. Speaking of Emily, her character has a hell of a lot more agency than the female half of your average romantic comedy. She’s got clear goals and knows precisely what needs to be done to achieve them. Her romance with Kumail doesn’t exactly fit those plans, yet maybe he’s worth it. I should also reiterate that this is a brutally funny film, so much so that you’ll miss jokes due to laughing at other jokes.

Across the board, the cast is good. Yes, Kumail is playing himself. Consider how difficult that is, though, and how nearly impossible it would be for most of us to convincingly answer a phone on screen, much less play a character with a range of emotions. He’s often deadpan, frequently low-key, but he’s a likable and appealing lead. Zoe Kazan’s Emily is smart, perceptive, and a little loopy. Ray Romano does nice work in a rarely seen dramatic role, but he still brings his usual dry humor. Everybody is fairly low-key, with the exception of Holly Hunter as Beth. She’s a human tornado, a force of nature that will upend a hospital for her girl and go after a heckler twice her size at a comedy club. There’s a reason why she’s a national treasure, and she keeps proving it.

The only issue I had with the film is that it runs a little long. Considering Judd Apatow produced, that’s not entirely surprising. As faults go, that’s a minor one. The Big Sick is so funny, so smart, so heartfelt that it demands to be seen. Amazon Studios produced it, which means it won’t be long before it’s streaming. Go see this in the theater anyway. Films made with this kind of wit and intelligence don’t often come along, and they should be rewarded.

*Or five people. I don’t judge.

Tim Brennan
Tim has been alarmingly enthusiastic about movies ever since childhood. He grew up in Boulder and, foolishly, left Colorado to study Communications in Washington State. Making matters worse, he moved to Connecticut after meeting his too-good-for-him wife. Drawn by the Rockies and a mild climate, he triumphantly returned and settled down back in Boulder County. He's written numerous screenplays, loves hiking, and embarrassed himself in front of Samuel L. Jackson. True story.
Tagged: adeel akhtaranupam kheremily v. gordonholly hunterkumail nanjianimichael showalterray romanothe big sickzenobia shroffzoe kazan