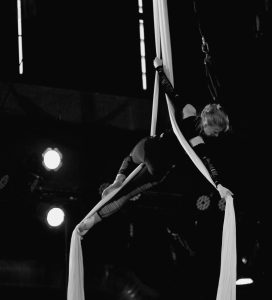 I think some small part of me has always wanted to run away and join the circus. It’s my great sorrow that I found out just recently that such a thing is not only still possible, but a helluva lot of fun. I know because I started a circus adventure a couple years ago, which was too late for me to be the next star of Cirque du Soleil, but still plenty of time to get a ripped upper body and rip the skin off numerous contact points.

The chain reaction that ended with me dangling from the ceiling of a renovated warehouse began, as did most good things in my life, with improv. I was playing on an improv troupe when a teammate said, “You have great legs; you should do burlesque” and so I did. Then one of my burlesque colleagues said, “Circus is fun; you should try it” and so I did. As soon as I started, I knew that this was something deeply resonant with the “me” I was searching for. It’s a wonderful combination of athletics and artistry. 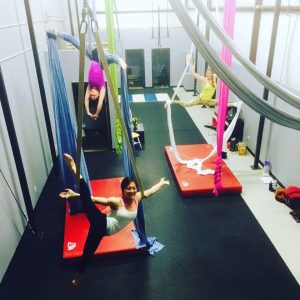 I do lots of other athletics (ask me about the marathon I’m running on Sunday), but nothing that includes performance in the audience-and-artist sense. I was immediately hooked. Or should I say, hung up. Or even better, inextricably snarled in the silks.

“Circus aerials” can be many different things. The most common are the Lyra, the trapeze, the silks, and the rope, but there are many other formal and invented apparatuses that are used. I primarily use the silks, because they’re so pretty. Also, the Lyra and trapeze really hurt in a blunt-force-trauma way. Silks will give you a rug burn from hell, but it’s a gentler domination for a wimp like me.

When you walk into an aerials studio for the first time, you will immediately see a cohort of implausibly strong individuals performing jaw-dropping feats of strength and grace a couple stories up in the air. There will also be a group of tiny children doing the same things. Don’t worry about any of this yet. Your first lesson is a success if you can get yourself off the ground. It’s called “aerials” not “groundials.” 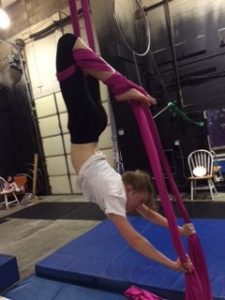 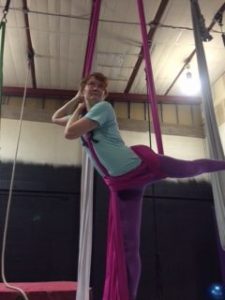 The first thing you have to do in aerials is learn to climb. There’s dozens of ways to hoist yourself up a column of silky fabric. None of them are easy. The simplest is to wrap the tail end around your foot and ankle, brace it with the other, and heave yourself up with your arms. To return to terra firma, lower yourself hand-over-hand while allowing the fabric to slide across your wrapped foot and erode the first three layers of dermis as you descend. Do this a couple times each on the right and left until your feet are weeping. Don’t worry about falling; your body’s innate fear of falling will override any amount of fatigue. Your grip will not waver until you get back on the ground and find your arms are shaking like aspen leaves. The day after my first aerials lesson, I struggled to feed myself because my hands and arms were quaking so badly.

The mark of honor in aerials is minor injury. “Love bites” from the Lyra or trapeze bruise the back of knees and the crooks of elbows. Fabric burns scrape off nearly-graft-worthy chunks of skin from waists and biceps. Tattered muscles, huge bruises, burned skins…why do I do this? Because it’s totally and completely badass. And if you want to be a total badass, too, you should give circus a try.

There are numerous excellent studios in town–such as Gravity Aerial Arts, the Moth Contemporary Circus, and the Denver Circus Collective, among others—which offer classes in aerials, contortion, hand-balancing, and other acrobatics. Anyone of any age and any level of fitness or experience is welcome to join in. If acrobatics is maybe not quite your thing, there are other great circus arts like juggling or clowning. Up Down Circus has options for everyone, children included, across the Front Range.

If you’d just like to see some of this awesomeness in action, options abound. The Moth regularly produces shows (next one on April 28) featuring entire casts of aerialists. Illuminar Aerial also presents spectacular modern circus shows (next on April 7).  Tracks nightclub and Exdo Event Center often feature entertainment that includes aerialists. Mesmerie Entertainment books cirque-style performers into a variety of shows throughout the year for nearly every sort of event. And the Phantom Circus is coming up soon, too!

The circus has enticed and seduced us for thousands of years. It still beckons. Most of us will never run away to join it, but all of us can enjoy it and even participate in it. And the best way to do that? Put some skin in the game. Merde!

Jessie Hanson
Jessie Hanson lives and works in Denver and couldn't be happier about it. Like the best-possible kind of Jekyl-and-Hyde scenario, she splits her life between science and storytelling. During the day, she performs clinical diagnostics and messes around with test tubes. At night, she performs behind the mic as a standup comedienne, in the air as a circus aerialist, and in rhinestones as burlesque dancer. She begrudges the hyper-inflated cost of a decent pair of false eyelashes. When she's not on stage, she sweating it out as an endurance athlete in triathlons and marathons across the West. She begrudges the hyper-inflated cost of a decent pair of running shoes. She's thrilled to be on board with OnDenver and writing about science, comedy, circus, athletics, and general fun on the Front Range!
Tagged: acrobaticsaerial silksaerialsCircus