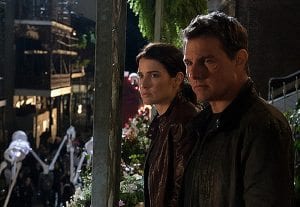 In order to explain to you why I disliked Jack Reacher: Never Go Back so much, I must first explain why I loved 2012’s Jack Reacher.

The original film is based on Lee Child’s series of hardboiled novels about the adventures of an ex-military policeman.* It was adapted for the screen and directed by the great Christopher McQuarrie, and it’s a no-nonsense, meat and potatoes action flick. Fight scenes and car chases are well-shot, as the title character Cruise gives a hilariously surly performance as a guy who is basically an invincible hobo, and the villain of the piece is German director Werner Herzog. Jack Reacher is the cinematic equivalent of an immaculately crafted Scandinavian table. There are no ornate designs, just clean and straight lines. Despite being tremendously dumb, it’s good stuff.

I suspect part of the film’s appeal is the character of Jack Reacher himself. He’s a combat specialist, a tactical genius, and basically the smartest and most observant person who ever lived. Reacher constantly deals with knuckleheads who won’t listen to him and just do what he says. He doesn’t necessarily want to beat the crap out of people, or explain to his inferiors the ins and outs of a conspiracy, but dammit, who else is going to do it? He’s an audience identification character for anyone who has to spend day after frustrating day dealing with lackwits and simpletons.

Thus far, there are 21 Reacher novels, all of them self-contained yarns where Our Hero stumbles into trouble and manages to extricate himself due to the fact that he’s a walking ubermensch. I think the plan was that Cruise would have a franchise that could sustain him either into old age or until his accidental death performing an insanely dangerous stunt on a Mission: Impossible movie. That’s great since I am unapologetically a fan of Mr. Cruise and his somewhat troubling intensity, but he’s not well-served in Jack Reacher: Never Go Back.

Initially, I thought I was in for another slice of pulpy foolishness. The first four minutes of the film are terrific, as we see Reacher sitting placidly inside a diner. Outside the diner lay the unconscious bodies of a group of toughs who unwisely antagonized Our Hero. Reacher condescendingly explains, while being cuffed by the local sheriff, that he’s exposed a human trafficking ring, and the police are on their way to pick up this basket full of deplorables. Having taken out the riffraff, Reacher fades away into the night. If I’d walked out of the theater at that point, I would have gotten my money’s worth. Unwisely, I stayed.

We learn that Reacher has been working as a kind of unofficial consultant with Major Susan Turner (Cobie Smulders). Given that they are both hard-as-nails professionals, they clumsily flirt with each other. When Reacher shows up at her office for a pseudo-date, he learns that Turner has been arrested for a crime she didn’t commit. Our Hero frees her, and they go on the run and attempt to unravel an entirely uninvolving mystery. Along the way, they meet Samantha (Danika Yarosh), a snotty teen who may or may not be Reacher’s daughter. This proves once again that the Movie Gods can be spiteful and cruel since we have yet another film about a man who is only skilled at violence who must now learn to love. I sighed both heavily and audibly.

The secret weapon of the 2012 Jack Reacher was the casting of Werner Herzog as The Zec. Pairing Herzog’s nihilistic force of personality against Cruise’s barely-sane intensity was a masterstroke. For a movie like this to work, you need antagonists that can either compliment Cruise or stand up to him. We have neither of those things here. The mastermind of the conspiracy is General Harkness (Robert Knepper), who, along with Colonel Morgan (Holt McCallany), glowers unconvincingly at Reacher. They have no real inner life or characterization; they only exist for Reacher to sneer at them. J.K. Simmons as Cruise’s nemesis? I’d sell my kid to see that.

Their henchman is even worse. If you’re looking for a vaguely menacing white dude for your movie, you get Jai Courtney. If he’s not available, you get Joel Kinnaman. If he’s not available, you get Sam Worthington. None of them were available, so we’re stuck with Patrick Heusinger as the creatively named The Hunter, a character so bland he makes plain oatmeal look like the height of ancient Roman decadence.  The Hunter is an ex-soldier who now works as a paid killer. He actually tells Reacher, out loud, that he can “never go back to the world.” If the filmmakers thought we would appreciate the title of the movie being snuck into dialogue, they were gravely mistaken.

Cruise’s co-stars try. They really, really try. On the one hand, I appreciated Cobie Smulders trying to match Cruise’s intensity. She’s no damsel in distress, and she’s able to effectively run, drive, shoot, and beat the crap out of nameless goons. Smulders and Cruise have no chemistry, but it’s not for lack of trying. On the other hand is Danika Yarosh, as Reacher’s maybe/maybe not daughter. We have scenes of her mouthing off to Reacher and Turner, and displaying skills that she seems to have genetically inherited from her perhaps old man. It’s not her fault since she’s doing what is asked of her. In real life, teenagers frequently are stupid and annoying. But this is yet another action flick that awkwardly shoehorns in a kid for the sake of character development.

Let’s talk about character development for a hot minute. One of the reasons Captain America: The Winter Soldier works as well as it does is because the filmmakers understand that Cap doesn’t need to change, yet the world should change around him. Reacher is no different. The script, written by Richard Wenk and rewritten by Marshall Herskovitz and Edward Zwick, doesn’t understand that the appeal of the novels and the first film was Reacher’s impatience with nitwits and physical brutality. It tries to humanize someone who doesn’t need to be humanized, and it forgets that if you’re going to do a pulpy adventure, you need to be willing to get big and crazy.

Along with the screenplay is the fact that the wrong person is directing. Don’t get me wrong, Edward Zwick is a good director. Just look at Glory, The Last Samurai, and Courage Under Fire. He understands the military, and he understands the romantic notions of heroism, duty, and sacrifice. Zwick is an earnest and thoughtful filmmaker, and what we need here is someone who is willing to get a little sleazy and a lot silly. The action scenes feel airless, and a chase set in New Orleans during Halloween misses a ton of potentially fun opportunities. It feels like Zwick signed on, not fully understanding the material, and midway through filming, he realized he didn’t want to make an action movie. She would have been slumming, but if Kathryn Bigelow decided to return to her Point Break roots, she would have crushed this.

Perhaps the biggest tragedy here is that Tom Cruise’s performance is better than the film around him. I’m convinced that when he bows out of action flicks and fully turns his attention to acting, he’ll eventually win an Academy Award. He’s playing a character who has only ever excelled at hurting people, but he has no idea how to behave in an adult relationship. While that’s a compelling concept, it’s not one that fits into this story in the particular way it should be told.

But Cruise possesses willpower that’s superhuman, and if he wants another long-running franchise, mere mortals like us won’t be able to stop him. If there is another Jack Reacher movie, we can only hope that it embraces its airport thriller roots. For what it’s worth, I’ll never go back to Never Go Back.

*In the books, the character of Jack Reacher is a hulking monstrosity who stands 6’5″ and weighs 250 pounds, so you can kind of understand why the 5’7″ Tom Cruise was a good fit, casting-wise. Or not.

Tim Brennan
Tim has been alarmingly enthusiastic about movies ever since childhood. He grew up in Boulder and, foolishly, left Colorado to study Communications in Washington State. Making matters worse, he moved to Connecticut after meeting his too-good-for-him wife. Drawn by the Rockies and a mild climate, he triumphantly returned and settled down back in Boulder County. He's written numerous screenplays, loves hiking, and embarrassed himself in front of Samuel L. Jackson. True story.
Tagged: cobie smuldersdanika yaroshedward zwickholt mccallanymarshall herskovitzpatrick heusingerrichard wenktom cruise