It’s Hard Out Here For A Mom 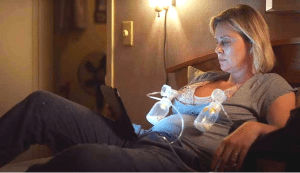 To my mind, one of the most annoying phrases floating around is, “We’re having a baby.” This line is frequently delivered by the soon-to-be dad. He often wears a chipper and confidently oblivious expression on his face. Upon hearing this, the soon-to-be mom usually grits her teeth a little, as if to say, “We are having a baby? We are doing no such thing.” She thinks a moment about punching her partner in his stupid face, but the moment passes. Usually.

Parenthood, both pre and post-birth, is a parade of horrors. I say that as a parent who dearly loves his son who’s a precious miracle from baby Jesus and blah blah blah. Parenting is hard, and I say that as a dad, a person who got the easy end of the deal. My wife? Holy hell, she’s the one who did all the hard work.

Parenting sucks. If you’re a parent, you know this. If you’re a mom, you certainly don’t need me to tell you. Movies don’t often get this real about raising a child, so when one comes along with that kind of unflinching, brutal honesty, it’s worth paying attention to. Tully is precisely one of those movies. 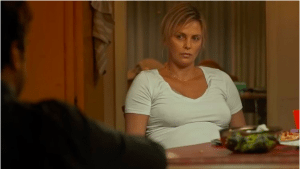 You know how in a lot of movies, the pregnant woman is glowing with the anticipation of giving birth? This is not Marlo’s (Charlize Theron) life. She’s pregnant with her third child, and days away from delivery. This baby was unplanned, but Marlo has to deal with it. She also has to deal with her sweet but somewhat insecure 8-year-old daughter Sarah (Lia Frankland), and her five-year-old son Jonah (Asher Miles Fallica), who may be on the autism spectrum and is close to being kicked out of kindergarten.

Her husband Drew (Ron Livingston) is a good guy who works like crazy, but their sex life is non-existent. Does Marlo have an exciting and fulfilling career to return to? Not so much, just a job in HR that helps pay the bills and allows them to remain solidly middle class. We sense that a fragile equilibrium had been reached in Marlo’s life, then the baby came in like a wrecking ball.

Marlo is kind of going through a lot. Even her jerk of a brother Craig (Mark Duplass) can see she needs help. He’s rich, and he insists on paying for a night nanny so Marlo can get some desperately needed rest. This is Tully (Mackenzie Davis). She seems to be a manic pixie night nanny, quirky, direct, and preternaturally aware of Marlo’s needs. From 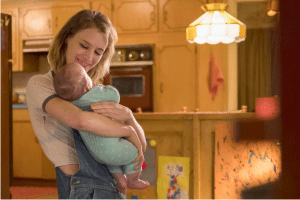 Allow me a small digression. In 2014, Australian director Jennifer Kent made The Babadook, a horror movie about parenting. Not only is this film genuinely frightening, it cannily exposes the ugly little secret at the heart of every parent. The thought that rears its head in times of extreme stress, that no matter how much you love your child? It’s the thought I wish I’d never had this child. There’s another secret, though. If you think it makes you a bad person to have entertained that thought, even for an instant…it doesn’t.

Tully and The Babadook would make for one hell of a double feature, considering neither film is afraid to get real. Director Jason Reitman is fully committed to that ethos, and he shows* us the feeling just after a baby is born, that weird sensation of exhaustion, tedium, and surrealism. Reitman is by no means a flashy filmmaker. He’s more interested in the details of human behavior, and observing how a normal person processes normal stress.

Diablo Cody wrote the script and…well, let’s talk about her for a moment. You might recall her winning an Oscar for having written the very, very good screenplay for Juno. She’s stayed in the business, created two TV series, and written several other screenplays. Why isn’t she spoken of with the same reverence as Quentin Tarantino or Spike Lee?** Like Tarantino or Kevin Smith, Cody’s characters are often hyperverbal. She also loves writing about women who are simultaneously dealing with internal and external struggles. Her script here is just as perceptive as any of her other work. She’s not afraid to go to dark places, and she drew upon her own struggles with postpartum depression.*** 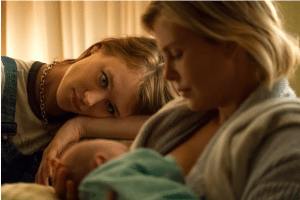 The cast does good work, but the performance to savor is Charlize Theron as Marlo. Take a look at her filmography and you’ll see it took her some time before her talent was fully appreciated. She transformed herself into a serial killer for Monster and was the lead in Mad Max: Fury Road, one of the greatest action movies ever made. She doesn’t have to prove anything to anybody. Yet she keeps pushing herself. Here, she’s given us a performance on par with Robert De Niro in Raging Bull, where an actor’s physical transformation acts as a doorway to learn about the emotional truth of a character. Theron put on fifty pounds for the role, and hides her raging emotions under slumped posture and hooded eyes. This is a masterclass in acting.

The trailer for Tully sells us an indie comedy about the difficulties of parenthood. The reality of Tully is darker, deeper, truer. Bear in mind that the third act goes to some upsetting places, so you may wish to prepare yourself. Don’t be scared away, though, otherwise you’ll miss a smart and honest film with something profound to say.

***A controversy is swirling around Tully, which you can read more about in this article. Beware gigantic spoilers and read at your own risk. For what it’s worth, I find this to be a movie about the danger of denying self care. It’s art, and it comes from a real place and real experiences. Does art have a responsibility to accurately portray postpartum mental health issues? No. Would it have been a better film if it had? I don’t know. It would have been a different movie, and we can ultimately only review what we have, not what we wish we had.

Tim Brennan
Tim has been alarmingly enthusiastic about movies ever since childhood. He grew up in Boulder and, foolishly, left Colorado to study Communications in Washington State. Making matters worse, he moved to Connecticut after meeting his too-good-for-him wife. Drawn by the Rockies and a mild climate, he triumphantly returned and settled down back in Boulder County. He's written numerous screenplays, loves hiking, and embarrassed himself in front of Samuel L. Jackson. True story.
Tagged: asher miles fallicacharlize therondiablo codyjason reitmanlia franklandmackenzie davismark duplassron livingstontully