Everything ends. Sometimes it’s unplanned. Look at Terry Pratchett, the prolific English author. He wrote dozens of novels and gained a worldwide following due to his piercing intellect and cutting wit. He should have lived longer, written more, but on March 12, 2015, Alzheimer’s disease snuffed out his mighty brain at age 66.*

Other times endings are planned. On June 20, 2017, Daniel Day-Lewis announced his retirement from acting. In an interview with W magazine, the 60-year-old icon explained that the making of his final film, Phantom Thread, left him “overwhelmed with sadness.” That feeling led him to make the decision to exit, stage left.

I can’t blame him. Day-Lewis made less than 20 films, but in the majority of them, he famously transformed himself into the various roles through Method acting. As the cerebral palsy afflicted artist Christy Brown in My Left Foot, he spent the entire shoot in a wheelchair. During the shoot for The Crucible, Day-Lewis refused to bathe at all, since he wanted to get the sense of living within 17th century standards. It’s fair to say that Day-Lewis does not screw around, and that’s probably why he’s won three Academy Awards.**

He never took an easy role just to get paid. He never repeated himself. He seems to have chosen his parts based on legitimate curiosity, then applied his craftsman-like skill to them. Should you see Phantom Thread, his allegedly final film? Of course you should, if only to see a master at work alongside other talented actors and a brilliant filmmaker. 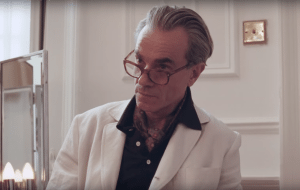 Day-Lewis plays the amusingly named Reynolds Woodcock, a man of very meticulous habits. We see him thoroughly applying shaving cream, brushing back a gray mane of hair, and carefully snipping his nose hairs. During breakfast, he sketches while Joanna (Camilla Rutherford) offers him a gooey pastry. Reynolds looks at the young woman with outright contempt. His sister Cyril (Lesley Manville) asks him later what he wants done with Joanna. “She’s lovely, but the time has come,” Reynolds tells her. Cyril responds with, “I’ll give her the October dress,” and we sense that this routine has taken place more than a few times.

Reynolds is a dressmaker; no, he’s possibly the dressmaker. He lives in London, sometime in the 1950’s, and his skills are sought after by royalty and socialites. Along with a small army of seamstresses, Reynolds creates wearable works of art. Cyril keeps the business humming along, and she does so with ruthless efficiency. Together, the siblings have settled into a pattern that seems to work.

Naturally, the pattern is blown up. On the way to his secluded country home, Reynolds breakfasts at a cafe. He’s served by Alma (Vicky Krieps), a young German woman. Being the world-class control freak that he is, Reynolds gives Alma an enormous and complex breakfast order. She gets it perfectly, and he’s bowled over by her. The attraction is mutual, and soon enough the two of them enter into something approximating a romance. 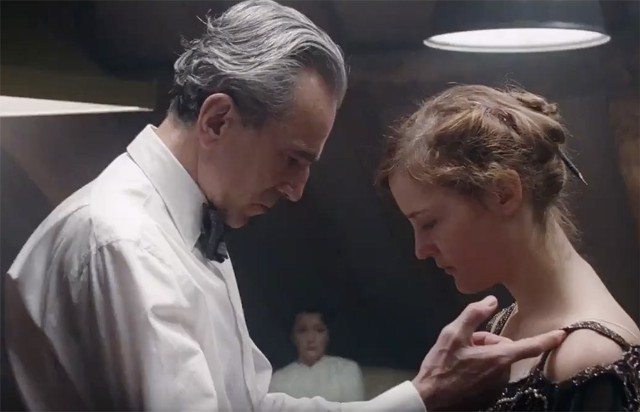 I say “approximating,” because, again, Reynolds is a man of meticulous habits, and those habits can be easily disrupted by the chaos of other people. We see him trying to keep order in a scene where he’s taking Alma’s measurements. She’s embarrassed by the smallness of her breasts. He brushes it off, saying, “You’re perfect. It’s my job to give you some if I choose to.” In her way, Alma pushes back and asserts herself. She tells Reynolds, “Whatever you do, do it carefully.” You will be unsurprised to learn that Reynolds is very much not careful.

And then? Well, it gets complicated. Paul Thomas Anderson*** wrote the script and directed, and if you’re familiar with his filmography, you know that he doesn’t make conventional movies. Anderson shepherded Adam Sandler to a genuinely impressive performance in Punch-Drunk Love, and helped Day-Lewis win an Oscar playing the monstrous Daniel Plainview in There Will Be Blood.

Like Spielberg or Tarantino, Anderson intuitively understands the language of film. He’s made a movie that’s not only beautiful, but tactile. You can almost feel the materials of the dresses, smell the forest scents as Alma hunts for mushrooms. Anderson’s style has evolved as well. Earlier films like Boogie Nights have a propulsive feel, almost as if Anderson is ripping off…I’m sorry…homaging Martin Scorsese. His last few films have felt more deliberate and individual, and Phantom Thread isn’t afraid to take its time establishing character within claustrophobic homes. 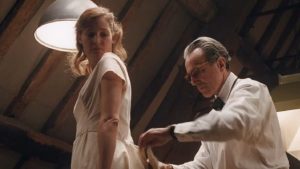 In terms of the script, I’ve got good news, and more good news which is disguised as bad news. The goodnews is that Anderson is telling an unconventional story, one that’s impossible to predict. That’s good, since too many current filmgoers are more interested in playing “Gotcha” with filmmakers by trying to guess plot twists ahead of time. Anderson’s script is a character piece, and he’s not interested in hitting arbitrary story beats. The hidden good news is that, since he’s made a character piece, Anderson isn’t interested in tying up loose ends. There’s a lot of mystery to be had here. We never quite learn Alma’s motivations for certain actions, we never totally understand aspects of Reynolds’ past; hell, we never learn exactly what year it is! Anderson’s withholding of information creates a feeling of unease, a dreamlike sense where anything is possible.

One of my favorite parts of watching movies is “discovering” actors that have actually been working for years. Lesley Manville, I’m ashamed to say, has been totally off my radar until now. A prolific English actor, she’s crisp and calculating as Cyril. We can see she loves her brother, and she also conducts herself as an H.R. rep from Hell. She’ll steamroll over anyone, but she’ll never raise her voice doing so. Vicky Krieps shares the majority of her scenes with Day-Lewis, and she matches him in terms of skill and subtlety. An unappreciated skill in acting is the ability to believably react to someone else. Krieps has the more low-key part compared to Day-Lewis, and it’s fascinating to see her respond to him with a glance or a small smile.

As the persnickety Reynolds, Day-Lewis is excellent as usual. Remember his milkshake line in There Will Be Blood, or his sociopathic Bill “The Butcher” Cutting in Gangs of New York? Both of those were big and showy performances. Here, Day-Lewis goes in the opposite direction as a precise and tightly-wound man. Albert Einstein reportedly had a wardrobe of exactly the same clothing so he wouldn’t have to waste brainpower on deciding what to wear. Reynolds has similar habits, and his life has been carefully designed with maximum dressmaking efficiency in mind.

On Tuesday the 23rd of January, the Academy Award nominations will be announced. Will Day-Lewis be nominated? Possibly. Will the lure of another Oscar coax him out of retirement? Does he just need a lengthy vacation? I can’t say. If this is it for him, then I wish him well, as he’s certainly earned it. I can’t deny there’s a certain sadness at the thought of never seeing another Day-Lewis performance. 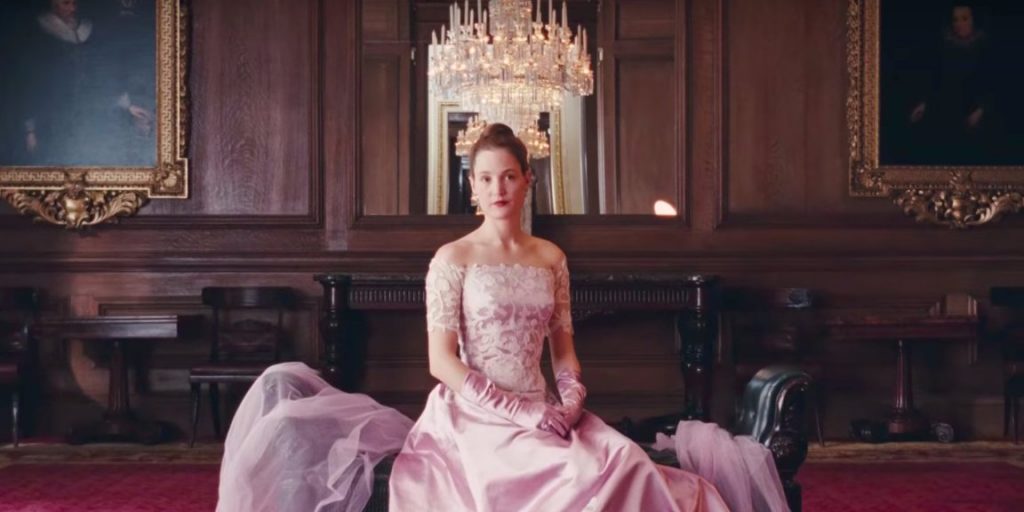 Yet as Day-Lewis ages, and whether or not he returns to film, there’s one absolute certainty. New people will continually discover his work. They will consider it, criticize it, be moved by it. As Day-Lewis took lessons from others and applied them to his craft, so, too, will other performers learn from him. He’s a part of a vast continuum of artistic accomplishment. So, in a way, nothing ever ends.

*His last novel, The Shepherd’s Crown, was published just a few months after he died. I can’t bring myself to read it yet, since the reading of the book is an acknowledgment that it’s his last book. One day, though.

**With the exceptions of Alec Guinness and Meryl Streep, I can’t think of another actor that has such a chameleonic range. Can you blame him for wanting to take a break and hang out at home watching reality TV?

***Not to be confused with B-movie director Paul W.S. Anderson. Though I like to pretend they’re the same guy, and he alternates between making art films like The Master and horror movies like Event Horizon.

Tim Brennan
Tim has been alarmingly enthusiastic about movies ever since childhood. He grew up in Boulder and, foolishly, left Colorado to study Communications in Washington State. Making matters worse, he moved to Connecticut after meeting his too-good-for-him wife. Drawn by the Rockies and a mild climate, he triumphantly returned and settled down back in Boulder County. He's written numerous screenplays, loves hiking, and embarrassed himself in front of Samuel L. Jackson. True story.
Tagged: daniel day-lewislesley manvillepaul thomas andersonphantom threadvicky krieps