I Liked It Better When It Was Called Shutter Island 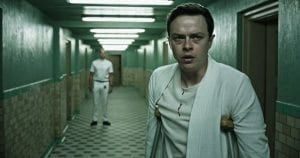 Let me begin this review by stating that I kind of hate my friends sometimes. I’ll explain.

Our fearless editor Scott Armstrong gives me enormous latitude to review anything I want. If I decided that I’d review Icelandic lesbian cinema exclusively, I suspect he’d be a-okay with it.* Some weeks the film to review is a no-brainer, as it’s either the major release of the weekend, like Rogue One, or it’s something I desperately want to share with you guys, like Green Room.

This week was different. There were three semi-major releases, those being Matt Damon’s Chinese creature feature The Great Wall, the feuding teacher comedy Fist Fight, or the surreal thriller A Cure For Wellness. I took to Facebook and conducted an informal poll. The votes came in, and there was a tie between Matt Damon battling unexplained critters or Dane DeHaan suffering the torments of the damned. A choice had to be made, and it was one made based on convenience and timing.

Even now, I can imagine my so-called amigos making their picks, then sitting back wearing vicious smiles on their faces. “This is the one that will break him,” they probably said, and they likely began a betting pool involving the remaining tatters of my sanity as I staggered out of the theater. That’s why I saw A Cure For Wellness, and I took that cinematic bullet for all of you. Don’t get me wrong, it’s not incompetent. It’s just that the pieces don’t mesh well together.

The film begins promisingly. We see a middle-aged stockbroker hunched over his computer. He’s all alone, it’s late night, and the man is surrounded by a vast field of empty cubicles. The sound mix is turned up, and the TAKATAKATAKA noises of his typing are deafening. Then, he drops dead of a massive heart attack. “An unsubtle attack on capitalism? Yay!” I thought to myself. We’re introduced to Lockhart (Dane DeHaan), a weaselly financial whiz who has been steadily climbing the rungs of power in the same financial institution. Sure, he has no friends, he doesn’t sleep well, and he looks pale and unhealthy. But he’s rich, and he just might make the leap to being filthy rich. Lockhart is summoned to meet with the board of directors, and he’s given a very strange assignment.

It seems the company CEO Pembroke (Harry Groener) has gone to a wellness center deep within the Swiss Alps. He is not eager to return to work, but the board needs him to smooth over some “irregularities” in preparation for a massive deal. Hank Green (David Bishins) is one of the board members, and he assigns Lockhart to retrieve Pembroke. By plane, train, and automobile driven by the friendly Enrico (Ivo Nandi), Lockhart arrives at the clinic. It’s an honest-to-God castle nestled in the craggy mountains, and the grounds are filled with wealthy white people playing croquet, badminton, and looking like they stepped back to the 19th century.

You will not be surprised to learn that shenanigans are afoot. The director of the clinic is Dr. Volmer (Jason Isaacs). He’s intelligent, compassionate, and he takes Lockhart’s snotty American-ness in unflappable stride. Volmer informs him that hordes of rich people come to the clinic for the cure. The cure for what? Why, modern society, silly! The civilized world is a corrosive force against the human spirit, and people need to make use of the healing waters of the clinic to restore their equilibrium. Coincidentally, Volmer believes Lockhart has a particularly advanced case, especially for one so young.

Lockhart agrees to stick around and receive treatment, giving himself a way to explore the grounds of the sanitarium and track down Pembroke. A fellow patient, the elegant Watkins (Celia Imrie), is an amateur historian, and she fills Lockhart’s mind with tales of nightmarish experiments and rampaging villagers. Lockhart also encounters the mysterious Hannah (Mia Goth), a “special case” that wanders the grounds at will and has a connection to Volmer. There are also highly questionable treatment methods, and eels. Lots and lots of eels.

There’s no doubt that A Cure For Wellness is one of the weirdest releases from a studio in a long time. Filmed at the castle Hohenzollern in Germany, the place positively drips with Gothic atmosphere. That makes it an ideal location for director Gore Verbinski, and the story he’s attempting to tell. Verbinski is best known for the remake of The Ring, the not very good The Lone Ranger, and three out of five of the Pirates of the Caribbean blockbusters. Visually, Verbinski is a pretty damn fine director. He’s a whiz at creating a particular atmosphere, strong visuals, and entertaining set pieces. But he also has an inability to stick with a consistent tone. He creates gigantic films that don’t have much in the way of substance, and he makes movies that are simply too long. A Cure For Wellness is two hours and 26 minutes long, and I promise that you’ll feel every millisecond. That would be okay if the pacing kept up, but every time something weird happens, Verbinski brings the movie to a screeching halt. It’s as if he’s saying, “Look at the weird, weird thing! Isn’t that surreal and disturbing?” Even in the last half hour, when the film commits to going full bat-poop crazy, it never smoothly ties up the story or resolves the arcs of the characters.

Verbinski developed the story with screenwriter Justin Haythe. I get the attraction, I really do, of showing a self-styled Master of the Universe brought low by something old and evil. But a big issue with the script is the frustrating lack of motivation for most of the characters. Lockhart’s primary characteristic is naked selfishness. So why does he try to discover the truth about the sanitarium or what’s really going on with Hannah? The film won’t tell us, and we have Lockhart doing all kinds of things that don’t make a hell of a lot of sense.

The cast is pretty decent, for the most part. Mia Goth’s Hannah doesn’t have much to do other than seeming haunted and dazed. What does she want? The film won’t tell us. As Volmer, Jason Isaacs understands perfectly that he’s in an overheated Gothic thriller, and calibrates his performance accordingly. He’s a character actor of both intelligence and intensity, and he’s always a welcome sight.

Let’s talk about Dane DeHaan for a moment. Most of you will remember him as the telekinetic maniac Andrew in the pretty darn good Chronicle. He’s a skilled actor, and he’s someone who is unafraid to play a character that’s unlikable. As Lockhart, he’s the kind of guy who is both entitled and ignorant, the sort of person who would fit right into the Trump Administration. That’s okay because a protagonist doesn’t need to be likable, he just needs to be interesting. Lockhart isn’t fleshed out enough as a character. He’s given a half-assed backstory to try to make him more sympathetic, but when the majority of DeHaan’s business is gimping around the sanitarium on crutches and looking astonished at strange things, he simply can’t make for a compelling lead here.

Despite my many, many criticisms, I admired what Verbinski and his people were trying to do. Yes, A Cure For Wellness can’t help but remind us of other, better films, and yes, its punishing length becomes just as unpleasant as a nightmarish dental sequence in the film. But it’s going for something unique, and the recurring visual aesthetics of water, drowning, and undersea creatures are oddly beautiful. The film also asks compelling questions about the sickness of this modern world. It’s just a pity that it can’t provide equally compelling answers.

*For fans of Icelandic lesbian cinema, sorry for my lack of reviews. I’ll do better.

Tim Brennan
Tim has been alarmingly enthusiastic about movies ever since childhood. He grew up in Boulder and, foolishly, left Colorado to study Communications in Washington State. Making matters worse, he moved to Connecticut after meeting his too-good-for-him wife. Drawn by the Rockies and a mild climate, he triumphantly returned and settled down back in Boulder County. He's written numerous screenplays, loves hiking, and embarrassed himself in front of Samuel L. Jackson. True story.
Tagged: a cure for wellnesscelia imriedane dehaandavid bishinsgore verbinskiharry groenerivo nandijason isaacsjustin haythemia goth