Home » Blog » Movies » I Have a Moderately Good Feeling About This

I Have a Moderately Good Feeling About This

Just when I thought I was done with Star Wars, The Last Jedi pulled me back in. As a kid, Star Wars and The Empire Strikes Back were right on my wavelength — or I was on theirs. Then, I saw Return of the Jedi, and in one of the first times as a neophyte filmgoer, I had to grapple with disappointment. That was when I started to move away from the Force.

Years go by. George Lucas makes the first of his infamous Prequels and, like a jackass, I stood in line in Seattle to see The Phantom Menace. Did I walk out of the theater and boldly proclaim that it sucked? I did not. I made excuses for it, for God’s sake! Yet I soldiered on and dutifully saw the rest of the misbegotten prequels.

More years went by, and in 2015, The Force Awakens was released. By then, the MCU was in full swing, and I remember thinking to myself, “This flick is great fun and all, but it’s not much more than a retread of the first film. No big, at least I have the Marvel movies to scratch my nerd itch.” However, there were folks out there that only got their nerd itch scratched by Star Wars.

It all came to a head with the release of The Last Jedi, the most divisive film in the series. There seemed to primarily be two camps of fans. The first were folks like me yearning for something new, a bold expansion to the mythos. The second were folks hoping for something that reconnected them to nostalgia, the experiences they cherished from childhood. These camps do not always see eye to eye.* With the release of Solo: A Star Wars Story, we definitely have a film leaning hard toward the second camp.

We begin on planet Charles Dickens, otherwise known as Corellia. It’s a shipbuilding world, covered in smoke, grime, and absolutely no pastel colors whatsoever. Criminal syndicates compete with each other for power and resources, and

they press-gang children into servitude. One of them is a teenaged punk named Han (Alden Ehrenreich), and he’s in a classic bad news/good news/bad news scenario. The bad news is that Han’s young life may be coming to an end due to a “misunderstanding” with a crime boss. The good news is that he’s in love with Qi’ra (Emilia Clarke) and they have a plan to escape offworld. The bad news is that the plan only sort of works, and Han escapes while Qi’ra is left behind.

So what’s Han’s genius plan now? It’s joining the Imperial Flight Academy, which he gets thrown out of for insubordination and is assigned to be a lowly member of the infantry. During a pitched battle, Han falls in with a group of reprobates led by Beckett (Woody Harrelson) and Val (Thandie Newton). Speaking of genius plans, they have one of their own. It involves the theft of hyperfuel on a train. Let’s take a moment to rejoice the simple existence of a train heist! In a Star Wars movie! My heart positively soars.

Anyway, there are complications, natch. On the bright side, Han is joined by a certain Wookiee who goes by Chewbacca (Joonas Suotamo) and has a predilection for ripping arms out of sockets. He’s also joined by Lando Calrissian (Donald Glover), a wildly charismatic gambler and rogue-about-town. 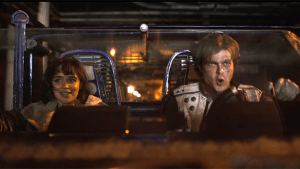 an even bigger and more dangerous heist for crime boss Dryden Vos (Paul Bettany)? Also, no. Will you clasp your hand to your breast and retreat to your fainting couch upon learning the origins of Han and the Kessel Run, his blaster, and the Millennium Falcon? Not so much.

Some things are best left to the imagination. For example, one of the smartest things done in the movie John Wick was so very easy to do. Early on in the film, we’re told that the feared assassin completed an impossible task. We never see the task, and only get the barest details about it. That’s wise, because what we picture in our imaginations is far more vivid than the surely pedestrian reality that could potentially be shown on screen. You want to see the impossible task, but you don’t really.

Solo gallops in the other direction. Let me be clear, as fun summer movies go, I enjoyed this despite its troubled production. Phil Lord and Christopher Miller, who directed The Lego Movie, were on track to direct Solo. They were fired due to “creative differences”*** and replaced by Ron Howard. Howard is a consummate professional known to bring his films in on time and under budget. His job here was to just drag the damn thing across the finish line, and after reportedly reshooting around 70% of the movie with minimal prep time, he did just that.

I like Howard as a filmmaker for the most part, and I will fight anyone who has a negative word to say about Apollo 13. But he’s also responsible for the not very good Gung Ho, the sickly sweet Far and Away, and the impressively stupid The Da Vinci Code. He’s not an artist, he’s a craftsman, and adjusts his style according to the project he’s working on. That means it’s rare to see one of his films and think, “That’s absolutely a Ron Howard movie.” Solo moves relatively swiftly, and I have to give him big props for the thrilling train heist alone.

There’s a sizeable problem, though. It bears mentioning that I like bacon on my pizza, with my eggs, and as part of my cheeseburger. I do not like bacon with my Star Wars, because holy hell, it looks like the camera is positively coated with bacon grease. A great deal of this film looks grimy and gritty. It’s almost like Howard thought, “I’ve always wanted to make a movie set at a mud festival, but with earth tones!”

Screenwriter Lawrence Kasdan has been involved with George Lucas’ creation ever since he co-wrote The Empire Strikes Back. He wrote the script for Solo along with Jonathan Kasdan, his son. The Kasdans have written a screenplay that’s irreverent, entertaining, and also completely safe and full of fan service. It takes absolutely no chances, and seems to tick boxes as the story goes on. Here’s why the hero’s last name is “Solo.” Here’s how he met Chewie. Here’s how he got the Millennium Falcon. It too often feels lifeless and lacking the anarchic spirit of its hero.**** 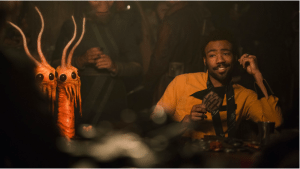 Add an uneven cast performing from a troublesome script. Props must be given to Donald Glover as Lando. He’s smooth, stylish, and both a great lover and a great lover of capes. I think I would have preferred a Young Lando movie instead. Props must also be given to Woody Harrelson, and his Beckett is a fun and competent crook. I also liked Phoebe Waller-Bridge as L3-37, Lando’s right hand droid. She’s spunky, more than a little besotted with her boss, and her excitement upon taking the opportunity to free fellow droids is infectious. Props must be taken away from Emilia Clarke, however. As written, Qi’ra is meant to be a fairly layered character, Clarke plays each layer almost exactly the same way, and there’s very little energy to her.

How about Young Master Solo, himself? I’m sure Alden Ehrenreich can relate to George Lazenby, who had the

unenviable task of playing James Bond following the iconic Sean Connery. Ehrenreich looks and sounds precisely nothing like Harrison Ford, and he doesn’t have the edge that Ford brought to the stuffy Star Wars universe. Still, he mostly gets the essence of the rough-around-the-edges smuggler, and his performance is fun and appealing. Ehrenreich also gives us Ford’s famous Finger of Doom in one scene, which I highly appreciated.

When it comes right down to it, does Solo have a compelling need to exist? No, and I’d much rather see a standalone film exploring something new. Why not an espionage tale about an Imperial spy, or a black comedy about a screwup who finds the armor of the dead Boba Fett? But there’s no sense in pining for what I want. I need to focus on what’s before me. Like a trusty blaster, this film is strictly aimed at providing a safe and nostalgic experience for fans. It’s fine, but Star Wars movies should be better than fine.

*I saw an online posting saying something to the effect of, “No longtime Star Wars fan** likes the current direction of this franchise!” With six seconds of searching online, you’ll find similar comments. I don’t recommend it, though.

**I couldn’t help but think of the No true Scotsman fallacy, which you can read more about here. No true Jedi, maybe?

***Lord and Miller are very much into giving performers the freedom to improvise. Is that a good idea to do on a high profile tentpole with a gigantic budget? I don’t know. Producer Kathleen Kennedy and screenwriter Lawrence Kasdan felt that Lord and Miller were making a straight up comedy, and felt that both time and money were being wasted. This makes the idea of a Lord and Miller version of Solo one of the great Hollywood what-ifs.

****There’s also a plot twist with some disturbing implications. Spoilers abound, but you can read all about it here.

Tim Brennan
Tim has been alarmingly enthusiastic about movies ever since childhood. He grew up in Boulder and, foolishly, left Colorado to study Communications in Washington State. Making matters worse, he moved to Connecticut after meeting his too-good-for-him wife. Drawn by the Rockies and a mild climate, he triumphantly returned and settled down back in Boulder County. He's written numerous screenplays, loves hiking, and embarrassed himself in front of Samuel L. Jackson. True story.
Tagged: alden ehrenreichdonald gloveremilia clarkejonathan kasdanjoonas suotamolawrence kasdanpaul bettanyron howardsolo a star wars storywoody harrelson