Home » Blog » Movies » How Do You Say “That Sucked” In Hawaiian?

How Do You Say “That Sucked” In Hawaiian? 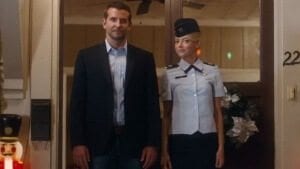 Hollywood is a place where people who should fail, don’t. It’s where people who deserve to have long careers crash and burn. Earlier this year, Michael Mann’s film Blackhat was released, and it flopped big-time. The man who made amazing films like Heat, The Insider and Collateral, has seemingly lost his touch. Can he regain his mojo? Hopefully.

Now that strange malady has afflicted Cameron Crowe with the execrable Aloha, but in this case, his career may be terminal. That’s a shame.

See, Crowe occupies an interesting filmmaking niche. He’s not a soulless journeyman director like the impressively untalented Robert Schwentke.* Nor is he a director like Michael Bay, someone who’s cultivated a directorial style and unique point of view, but who makes aggressively stupid movies anyway.**Ever since 1989’s Say Anything, Crowe has specialized in films where cynical/emotionally distant men learn to Embrace What’s Really Important, usually to the accompaniment of a pretty good soundtrack. He wears his heart on his sleeve. He makes films that are not only romantic, but Romantic. They’re passionate, ardent, idealistic, and you’d usually get swept away while watching them.

In Aloha, Bradley Cooper plays military contractor Brian Gilcrest. He works for billionaire Carson Welch (Bill Murray), and he’s tasked with traveling to Honolulu and convincing Hawaiian militant leader Dennis “Bumpy” Kanehele (playing himself) to give his blessing on the construction of a pedestrian gate. Welch has partnered with the military, and as such, perky fighter pilot and part-Hawaiian Allison Ng (Emma Stone), has been assigned to be Brian’s minder.

Along the way, Brian reconnects with his former love Tracy (Rachel McAdams.). Tracy is married to taciturn pilot Woody (John Krasinski), but still has unresolved issue with Brian. Alec Baldwin shows up as a shouty general, and the great Danny McBride appears as Brian’s pal Fingers. He’s called Fingers, because he just does things with his fingers. Yeah.

Will Brian overcome his cynicism? Will he and Allison fall in love, break up, and get back together again? Will Brian learn the hard lessons from his failed relationship with Tracy? Will there be an utter lack of suspense? Yes, yes, yes and yes.

There are so many problems with this film, and not even its mighty cast can save it. Things like characters constantly telling the shockingly good-looking Brian how terrible he looks. Things like the script not understanding what a military contractor actually does. Are contractors military liaisons? Computer hackers? Arms dealers? Yes to all of the above! But there’s two stumbles that are so egregious, and so easily fixable, that the film is hopelessly crippled.

First, Crowe’s script is maddeningly vague. We literally don’t learn until the third act what Brian is really doing for his boss and why he’s in Hawaii. Why is it dragged out for so long? The reveal is pointless. The subplot with Tracy is a tangent that drags on and on, and it just tells us that Brian is a cynical dick because reasons. Tracy’s precocious son is obsessed with the Hawaiian legend of Lono, meaning that he is constantly explaining the themes of the movie to us. The plot is a sprawling mess, with no cohesion or connective tissue. It feels like it was poorly adapted from a much longer novel, and I kept feeling like there were important sequences that had been cut. There are big chunks of the script that don’t make sense and don’t fit together. It’s like jumbling together pieces from 3 separate jigsaw puzzles and still trying to put it together.

Worst of all, the film initially pays lip service to the racial and colonial issues of Hawaii and promptly ignores them. Bumpy Kanahele is a fascinating guy. He’s the head of state of the group Nation Of Hawai’i, an organization that regards itself as a sovereign government that’s under the oppressive thumb of the U.S. government. Kanahele has worked for Hawaiian sovereignty for years, and in the last few years, has adopted a strategy of passive resistance. There’s a long sequence in the film where Brian, an old buddy of Bumpy’s, negotiates with him for the blessing of the pedestrian gate. The film sets up themes about the oppression of native Hawaiians and how the sky is not for sale. Brian has to make promises he can’t possibly keep, and we start thinking, “Excellent! Some really interesting conflict is getting set up!” Nope. We just see fragments of a Hawaiian ceremony later on, with lots of white people looking on, then that’s it. To lose a compelling viewpoint, and in such a sloppy way, is inexcusable.

God knows the cast tries. Stone is, as usual, charismatic and fun. Other writers have already made the Manic Pixie Fighter Pilot joke, but she does good work with the thinly drawn character she’s given. Cooper is also solid, moving nimbly between cynical wiseass and lovestruck idealist. Murray is in full “I don’t give a damn” mode, but he does a funny dance, so there’s that.

In 2005, Crowe made Elizabethtown, which became a massive failure. In 2011, he made We Bought a Zoo, which was forgotten by viewers. Aloha is looking like it’ll bomb as well. What happened to the guy that made the charming Almost Famous? The guy who made Vanilla Sky, a failure, but a fascinating one? If you’re a high profile filmmaker, you only get so many chances before going to director jail. He’s never been one of my favorite filmmakers, but I want Crowe to come back strong. Otherwise, he’ll be doing hard time.***

*He inflicted Insurgent upon the world this year, and R.I.P.D. last year. Why he’s not locked away in some CIA black site, I have no idea.

**Bay became a feature filmmaker in 1995. Since then, he’s made a grand total of 2 movies that weren’t awful. He’s got a unique style, it’s just not a good one. There’s The Rock, a movie that’s agreeably foolish, and Pain And Gain. Pain doesn’t quite work since Bay doesn’t seem to understand most of the jokes in the screenplay, but he gets good performances from Dwayne Johnson and Mark Wahlberg. Plus, when Wahlberg gets angry, he sounds like Daffy Duck. That’s a win right there.

Tim Brennan
Tim has been alarmingly enthusiastic about movies ever since childhood. He grew up in Boulder and, foolishly, left Colorado to study Communications in Washington State. Making matters worse, he moved to Connecticut after meeting his too-good-for-him wife. Drawn by the Rockies and a mild climate, he triumphantly returned and settled down back in Boulder County. He's written numerous screenplays, loves hiking, and embarrassed himself in front of Samuel L. Jackson. True story.
Tagged: alohabill murraybradley coopercameron crowedanny mcbridedennis bumpy kanaheleemma stonerachel mcadams