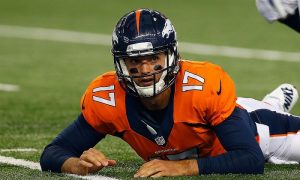 As Brock Osweiler took the field on Sunday, the Denver Broncos were hoping for the 2015 version. Not the bust that showed up in Houston, or the dud that couldn’t make Cleveland’s sad roster, but the 2015 version that lead Denver to an overtime victory over an undefeated New England squad two years ago. The plan was simple. Change the quarterback, cut down on turnovers, rely on defense, and inspire the team. The plan backfired.

Osweiler threw two interceptions, the Broncos committed 14 penalties, the offense was limited to 16 points, and the defense failed to show up in a 51-23 drubbing by the Philadelphia Eagles.

The coaching move failed to inspire the Broncos, and based on the team’s play, the quarterback position may not be the only vacancy looking to fill in the off-season. Here’s a look at the struggling Bronco coaching staff.

1) Head Coach -Vance Joseph could be in over his head. The quarterback play sure hasn’t helped, but the first-year coach’s resume already includes Sunday’s embarrassing loss, a 21-0 shut out to the Chargers, and a 23-10 laugher to the New York Giants, at home, and after a bye-week. I’m not ready to call him Josh McDaniel yet, but that Philly game didn’t help.

2) Offensive Coordinator – Mike McCoy came to the Broncos as the offensive guru that was ready to light up the scoreboard. At 18.8 points per game, Denver ranks 22nd in the league. Life without a star quarterback like Manning or Rivers can be rough.

3) Quarterback Coach – Bill Musgrave looked great after coaching Derek Carr over the last few years, but all he has gotten from this Bronco trio is turnovers, mistakes, and little-to-no development.

4) Defensive Coordinator – Joe Woods and his defense look good in most categories, except the one that counts the most. Denver has given up 24.8 points a game this year, which is 26th in the league. I don’t want to say they quit against Philly, but we all saw it.

6) Offensive Line Coach – Jeff Davidson is not responsible for the subpar play of the offensive line this season, and he doesn’t hire personnel. But the 28 sacks and endless hits, unless Davidson lines up in the backfield, he doesn’t seem to making much of a difference.

Vance Joseph has already named Brock Osweiler as the starting quarterback against New England on Sunday, although it seems obvious that Trevor Siemian gives the Broncos a better chance to win. Maybe he’s hoping it’s 2015 again, but with one more loss it could be time for the Paxton Lynch experiment to begin, and possibly, the Vance Joseph one to end.

Alan Tapley
Alan Tapley is an educator, author, and blogger who has lived just outside of Boulder for the last twenty years.  His published work includes two novels, two children’s books, a series of cartoons in the Minneapolis Star-Tribune, and multiple sports related articles. His love for family and the state of Colorado is only matched by one thing, his passion for sports.  The first baseball game he ever attended was at Wrigley Field, before there were lights.  At the final Bronco game at the old Mile High, he allegedly cut out a piece of his seat in the South stands.  But regardless of being here for the Avalanche’s last Stanley Cup, the Rockies only World Series appearance, and all the Broncos’ Super Bowl Victories, his wife never fails to remind him that he wasn’t at the University of Colorado in 1990, like she was.  The year the Buffs football team won the National Championship.
Tagged: Bill MusgraveBrock OlivoBrock OsweilerDenver BroncosJeff DavidsonJoe WoodsJosh McDanielsMike McCoyNew England PatriotsNFLPaxton LynchPhiladelphia EaglesTrevor SiemianVance Joseph