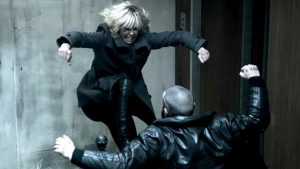 Are we entering an action movie Rennaissance? Maybe, because God knows we need it.

Whether we like it or not, things have changed. As much as I’m a shill for the Marvel Cinematic Universe, it’s a fact that superhero movies have largely taken the place of action movies. They’re still around, but these days theaters are filled with spandex, Avengers, and surly mutants. We’ll still see the occasional Mission Impossible, but those tend to be the exception more than the rule.

Maybe that’s a good thing. Maybe the relative drought forces us to appreciate it when a particularly well-made action movie comes along. That was absolutely the case with John Wick in 2014. Keanu Reeves played a gloomy assassin who embarks on a roaring rampage of destruction to avenge the murder of his absurdly cute puppy. The film wasn’t chockablock full of shaky-cam, popularized by Paul Greengrass’ Bourne movies, nor was it a creaky ripoff of Die Hard or Lethal Weapon. Instead, it was clean.

When you watch John Wick, the action geography is clear, so you always know where everyone is in relation to everyone else. Instead of digital trickery, you’ll see highly trained stuntmen performing a carefully choreographed dance. You can see their entire bodies and witness the payoff of Keanu’s months of training. The movie was a success, a big one. It helped that Derek Kolstad’s script was solid, but the lion’s share of credit should go to Devid Leitch and Chad Stahelski.

Leitch and Stahelski spent years as stuntmen, second-unit directors, and stunt coordinators.* They teamed up to co-direct John Wick, then amicably split. Stahelski went on to do more righteous ass-kickery with John Wick: Chapter 2 and the upcoming Chapter 3. Leitch is working on Deadpool 2 now, but before working on the adventures of the merc with a mouth, he gave us the exploits of a spy with a snarl in Atomic Blonde. Does ya boi Leitch acquit himself nicely? He does indeed.

It’s the first week of November 1989, and the Cold War is wheezing to a halt, especially in Berlin. James Gasciogne (Sam Hargrave) is an operative for MI-6. Make that was, because he’s been shot in the head and dumped in the river. Gasciogne had a list in his possession, called The List, of active MI-6 and CIA agents. It’s gone missing. His boss C (James Faulkner) isn’t pleased by this and sends Lorraine Broughton (Charlize Theron) to track it down. Broughton was close with Gasciogne, so she’s got her own score to settle.

She hits town and makes contact with David Percival (James McAvoy), a section chief with a taste for hedonism and smuggling. In between selling black market Jordache jeans, he’s working with Spyglass (Eddie Marsan), a frightened East Berliner who has memorized The List. The Berlin Wall is coming down, and Spyglass is willing to trade what he knows for safe passage for his family. There’s also a double agent for Broughton to uncover, and a romance with newbie French spy Delphine (Sofia Boutella), who may or may not be playing her. I hope you’re paying attention because she’s also recounting the whole thing to her other boss Gray (Toby Jones) and CIA chief Kurtzfeld (John Goodman). Were you hoping for a straightforward narrative? This is a movie about spies, silly! It’s supposed to be incomprehensible!

If you’re going to watch Atomic Blonde, and you absolutely should, there’s a right and a wrong way to watch it. The wrong way is to try and intensely follow the plot. Playing connect the dots with this movie is just going to piss you off because the script by Kurt Johnstad has an overstuffed plot, and dialogue crammed full of exposition. I wasn’t wild about his decision to structure the bulk of the script as flashbacks since it deflated a good bit of tension. Do I need to worry about Lorraine surviving a battle? Nope, because she’s telling her boss all about it. I appreciated Johnstad’s canny move to only use a brief dream sequence as backstory for Lorraine because everything we need to know comes from Theron’s performance.

The right way to watch this film is to understand that it is an Amish Furniture movie. Amish furniture is simple, made with clean lines and an emphasis on functionality. Its beauty comes from a commitment to craftsmanship. David Leitch has made an exceptionally well-crafted film, and if you go in with that approach, I’m positive you’ll enjoy yourself far more. Along with cinematographer Jonathan Sela, Leitch gives us a ton of visual information about Lorraine. When she’s got her game face on, scenes are lit with lots of cool blues to emphasize her icy professionalism. Red lighting shows us what she’s really feeling and what’s boiling to the surface. Add to this virtually every popular 80’s song ever, and you have a movie that’s not merely set during the 1980’s, but is The 1980’s.

That’s not why most of you will see this movie, however. You’ll buy the ticket to watch Theron beat the piss out of legions of goons, and that money is well-spent. Like his work on John Wick, Leitch’s action scenes are clear and kinetic. The showstopper is an extended “one take” sequence** where Lorraine battles multiple opponents inside, then outside an East German apartment building. The choreography is impressive, and Theron’s dedication is even more impressive. She cracked two teeth during the shoot, and after watching the hand-to-hand combat sequences, that doesn’t surprise me.

As much as I enjoyed James McAvoy’s sleazy agent, Toby Jones’ haughty boss, and John Goodman’s dickish Yank, Charlize Theron’s performance is the one to savor. She swigs vodka on the rocks, yet she’s always paying attention, always calculating. Her Lorraine is icy and intelligent, with commanding body language. I’ve heard her referred to as a female James Bond. The thing is, Bond is usually more louche, more of a creature of appetites. Lorraine is a stone-cold professional. She’s not striding through the chaos of the Wall coming down because she enjoys it. She’s there to do her job. Even more so than Scarlett Johansson, Theron has the sheer commitment and physicality to make the action scenes convincing and visceral. That’s what makes her the best in the business.

Atomic Blonde is by no means perfect. When it focuses on double and triple-crosses, the film becomes a slog. Forget all that. Watch the impeccably made action scenes, the feel of the film, and the powerful Charlize Theron performance that anchors everything. Keep all that in mind and you’ll enjoy one of the best pure action movies of the year.

*Why is there no category for Best Stunt Performance in the Oscars? I get that part of it is the need to maintain the illusion that actors “did” their own stunts. But these highly skilled professionals deserve a shout-out. Check out Vic Armstrong’s hair-raising memoir The True Adventures of the World’s Greatest Stuntman.

**The edits are obscured, but if you pay attention, you’ll see ’em.

Tim Brennan
Tim has been alarmingly enthusiastic about movies ever since childhood. He grew up in Boulder and, foolishly, left Colorado to study Communications in Washington State. Making matters worse, he moved to Connecticut after meeting his too-good-for-him wife. Drawn by the Rockies and a mild climate, he triumphantly returned and settled down back in Boulder County. He's written numerous screenplays, loves hiking, and embarrassed himself in front of Samuel L. Jackson. True story.
Tagged: atomic blondecharlize therondavid leitcheddie marsanjames mcavoyjohn goodmankurt johnstadsam hargravesofia boutellatoby jones