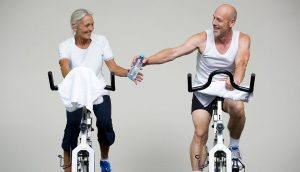 If you’ve ever been to CrossFit, you’ve done a HIIT workout.  HIIT is the acronym for high intensity interval training.   The concept has been around for a long time, but recent research suggests that a HIIT workout may help people of any age become healthier. A new study of old mice that ran on treadmills found that they can tolerate high-intensity interval training, and rapidly gain fitness and strength, even if they start off frail and sedentary.

HIIT is characterized by abbreviated, intense bouts of cardiovascular exercise alternating short periods of intense anaerobic exercise with less intense recovery periods. The primary allure of high-intensity interval training is, for most of us, its brevity. A typical high-intensity workout can last as little as 15 minutes, including a warm-up and cool-down, but has been shown in multiple studies to provide health and fitness benefits that are the same as or greater than an hour or more of continuous and relatively moderate exercise.

Much of the research into short, intense exercise, however, has centered on its benefits for healthy adults, usually those below the age of 50. One  study still going on in Japan recruited adults over 55 and found that interval walking — in which volunteers stride briskly for three minutes and then slowly for another three — enabled the older men and women to improve their endurance and blood pressures to a greater extent than walking moderately for the same amount of time. The question is, can high intensity interval training benefit older adults?

In the most recent study, published last month in the Journal of Gerontology, researchers at the University at Buffalo put frail, elderly mice through a program of high-intensity interval running. The mice were previously sedentary and the equivalent of age 65 in people. The mice were divided into two groups – the training group and those who would remain sedentary.

The mice in the training group sprinted uphill for one minute followed by a minute of walking, with that interval repeated four times. These training sessions occurred three times a week for four months,  the equivalent of about eight human years. The mice that remained sedentary displayed the expected physical traits associated with their age. They had less muscle mass, strength and endurance than four months before and were less active in general. The interval-trained mice were stronger and had greater endurance capacity, as well as more muscle mass in their hind legs than the sedentary mice.

Obviously, people are not mice, but the moral of this story is anyone can start exercising at any time and achieve benefits.  If you are over 50 and thinking about starting a HIIT program, consult with your doctor and consider a monitored program at a gym, YMCA or other facility where trained professionals can monitor your progress.

Andrea Groth
Andrea wants to live in a world where the neighborhoods are walkable, bike lanes are plentiful, and the food is fresh, delicious and readily available. A 20-year veteran of the health and wellness industry, she started her career in the fitness industry while earning a master’s degree in Exercise Science and Health Promotion, and then on to the burgeoning field of worksite wellness. Andrea has competed in collegiate level soccer, worked as a personal trainer, fitness instructor, wellness coach, and master trainer, climbed 14ers, and completed cycling centuries and metric centuries. All of these experiences give her the opportunity to view well-being from many different perspectives. When she’s not helping others to be their healthiest self, you can find her at a farm to table restaurant, down dogging at the yoga studio, or experiencing the Colorado landscape on a bicycle, snowshoes, cross country skis or on foot.
Tagged: exercisefitnesshealthOnDenver