Hey, Let’s Make A Movie Based On A Picture! 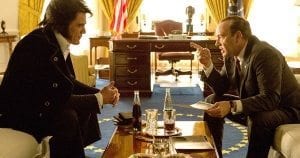 How can you describe America? Ronald Reagan famously called our country a “shining city on a hill.” Ralph Waldo Emerson opined that “America is another name for opportunity.” What do I think? I think America is a seriously weird-ass place. Here, I’ll prove it to you.

The Creation Museum, located in Petersburg, Kentucky, displays the skeleton of an Allosaurus fragilis, as proof of the Biblical account of creation. Seriously. At Dartmouth College, a sorority held an all-you-can-eat taco bar fundraiser during Cinco de Mayo, which was subsequently cancelled due to being culturally offensive. Seriously. The current Republican front-runner for President is an orange-hued reality TV star and is roughly as qualified for the office as I am.* I can’t even. I just can’t.

We are truly a nation that needs medication. We always have been. But one of the strangest moments in the history of our great republic took place a few days before Christmas in 1970. Through sheer force of will, and unencumbered by sanity, Elvis Presley made his way to the White House and spoke privately with President Richard Nixon. Liza Johnson’s film, Elvis & Nixon, dramatized those surreal events, and in its own way, it’s just as bizarre.

We meet Elvis (Michael Shannon) watching multiple televisions simultaneously at his tastefully decorated estate. The King is bombarded by images that are anathema to him. Hippies. Drugs. A wave of depravity. He reacts the way many of us would, which is to blast the TV with his trusty pistol, then embark on an odyssey to Save America.  While we all love Elvis, I think we can agree he wasn’t a whiz when it came to critical thinking.

Elvis travels to Los Angeles to enlist the help of Jerry Schilling (Alex Pettyfer), one of his underlings, in his daring scheme. The plan, such as it is, is for Elvis to be appointed a Federal Agent at Large for the Bureau of Narcotics and Dangerous Drugs. He wants to work undercover in order to stop the drug epidemic, but he’s stymied by the bureaucracy of the American government. Again, he does what many of us would do, which is to fly to Washington D.C. and hand-deliver a scrawled letter asking for the help of President Nixon.

The fateful letter makes its way to Egil Krogh (Colin Hanks), a lawyer and official in the Nixon Administration. Krogh sees an opportunity, one where Elvis can mobilize the youth of America in support of his boss’ policies. He just needs to convince Nixon (Kevin Spacey) that it’s a good idea.

There are a lot of aspects to Elvis & Nixon that are extremely strange, not the least of which is the script. Written by Hanala Sagal, Joey Sagal, and The Princess Bride‘s own Cary Elwes, the script seems to unconsciously realize that the premise can’t be sustained for an entire feature film length. We bounce through encounters between Elvis and “normal people,” where civilians gawk at him and stutter variations of, “I can’t believe Elvis is right in front of me!” I don’t doubt that when all of this was occurring, it was incredibly surreal for government bureaucrats to be interacting with the King. But we never quite feel that collision between drab reality and sparkly celebrity. Nor do we feel the towering entitlement of the truly famous, that feeling that rules and laws are for lesser mortals.

This is director Liza Johnson’s third feature and her second with Michael Shannon. I like her aesthetic here, and she’s not afraid to let things get slightly too silly. She’s able to wrangle good performances from her cast, but she attempts to make the dramatic arcs of the supporting players feel bigger than they actually are. For example, Alex Pettyfer’s Jerry has a subplot where his soon-to-be fiancee is upset with him spending so much time as Elvis’s gofer. He’s desperately trying to get home to ask her to marry him. The thing is, with the Olympian weirdness going on around him, Jerry’s story ceases to be interesting. Who cares about that, when we’re seeing Elvis’ blithe narcissism collide with Nixon’s cranky paranoia? Along with that is pacing that’s never quite smooth, and an overall tone that’s too jokey.

As Richard Milhous Nixon, Kevin Spacey is…pretty good. Spacey is a gifted mimic, and he captures Nixon’s stiffness, a man famously so incapable of relaxing that he was photographed walking on the beach in a three-piece suit. There’s a scene where Elvis hugs Nixon. Spacey does great subtle comedy here, where his arms twitch uncomfortably as if he’s trying to remind his body that a hug isn’t a physical assault. While Spacey is less jowly and growly, there is something undeniably Nixonian in his portrayal.

Michael Shannon is one of the greatest actors alive today, full stop. He’s known for possessing alarming intensity, and even when he’s in a film that’s beneath him, like Man of Steel, he still manages to make crap compelling. Shannon looks nothing like Elvis,** and barely sounds like him. While he doesn’t capture the King’s superhuman charisma, he does nail his subterranean weirdness. He thinks nothing of an impromptu karate demonstration in the Oval Office, or of visiting the President while heavily armed. He also shows us Elvis’ loneliness and his yearning for a connection that’s not based on what Elvis is.

In their scenes together, Spacey and Shannon are magnetic together. Both of their portrayals include a lot of hand-waving, and it sometimes looks like they’re trying to use the Force on each other. But they establish an odd connection. They’re two men who feel like they’ve been swallowed up into their professional roles. Two men who genuinely believe that their country is going to hell in a handbasket and that they are uniquely qualified to stop it. As problematic as the film is, I genuinely enjoyed the strangeness of watching them interact, even if it’s only for a short period of time.

We have no idea what Elvis and Nixon really talked about during that meeting. For one of the few times of his Presidency, Nixon didn’t bother to record it. The famous photo of Elvis Presley shaking hands with Richard Nixon is the most requested image from the National Archives. Putting aside the wrongness of those two men standing next to each other, why are we still fascinated with that encounter? I think it represents the random aspect of the American character, the fact that literally anything can happen in this country, no matter how ludicrous. It’s just a pity that Elvis & Nixon wasn’t able to capture that brief moment of chaos magic.

*Which should be terrifying for people who know both of us.

**When playing someone notable, the actor doesn’t have to be a dead ringer. They just need to capture the essence of their subject. Michael Fassbender looks nothing like Steve Jobs, but he was able to accurately pull off the man’s public persona in Steve Jobs.

Tim Brennan
Tim has been alarmingly enthusiastic about movies ever since childhood. He grew up in Boulder and, foolishly, left Colorado to study Communications in Washington State. Making matters worse, he moved to Connecticut after meeting his too-good-for-him wife. Drawn by the Rockies and a mild climate, he triumphantly returned and settled down back in Boulder County. He's written numerous screenplays, loves hiking, and embarrassed himself in front of Samuel L. Jackson. True story.
Tagged: alex pettyfercary elwescolin hankselvis & nixonhanala sagaljoey sagaljohnny knoxvillekevin spaceyliza johnsonmichael shannon