God Help Me, I Laughed 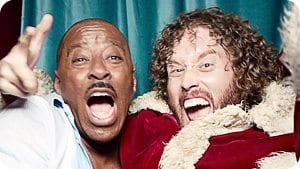 Work parties are awful. We all know that. But holiday work parties occupy a very specific place within one of the nine circles of Hell. What level would you find mandatory office mixers on, I wonder? Gluttony? Lust? Heresy? All of the above?

I know a little something about this. Since I work from home, I’m not forced to fraternize with the enemy. They don’t care about me, I don’t care about them, everybody’s happy. But my wife toils away in an honest-to-God office. Being the good soldier that she is, she’s occasionally compelled to attend work functions. Being that I’m afraid of divorce, I’m compelled to come with her.

Last year’s holiday party was an endurance test. It was like the Bataan Death March with a taco bar. 300 people crammed into a space meant for 200. A motivational speaker that was so terrible, he actually made me depressed. A single bar surrounded by impenetrable walls of revelers. Ideally, a holiday party should open your heart, instead of forcing you to consider opening your veins. The new comedy Office Christmas Party* knows a little something about this.

At the Chicago branch of tech company Zenotek, we’re introduced to our band of merry misfits. Josh (Jason Bateman) is the heart of the place. His divorce has just been finalized, and he’s trying to figure out what to do with himself. Maybe something with Tracey (Olivia Munn), a seriously talented programmer with whom he works closely. The customer service department is headed up by loudmouthed pervert Jeremy (Rob Corddry), and IT guy Nate (Karan Soni) is mercilessly teased about his imaginary girlfriend. HR rep Mary (Kate McKinnon) tries to enforce the rules while bedecked in her spectacularly ugly non-denominational holiday sweater.

Their boss is Clay (T.J. Miller), who heads up the division. Clay’s dad founded the company, and he’s determined to follow in his father’s footsteps, even if he is an irresponsible party animal. Nobody knows better how much of a goofball Clay is than Carol (Jennifer Aniston), his sister and the company CEO. With a few days before Christmas, Carol stomps into the office and announces massive layoffs and the closing of the Chicago branch if they don’t meet a wildly unrealistic goal of 12% growth in just 4 days.

Naturally, panic sets in. But Clay has a plan. It’s stupid, expensive, and dangerous, but it’s a plan all the same. Walter (Courtney B. Vance) is a rep for a massive potential client. He’s old school and has no use for today’s stuffy corporate culture. Clay decides to throw a massive Christmas party at Zenotek’s office, invite Walter, and get him to fall in love with the company and save everybody’s jobs. If blowing the rest of his trust fund for the party means that his people stay employed, so be it.

Remember the frat party in Animal House? Imagine if that sequence was stretched out to 3/4 of the movie, and you’ll have a good idea of what to expect. We have body parts unwisely shoved into a 3-D printer, reindeer drinking out of toilets, water coolers that dispense gin, tequila, and vodka, and a snow-making machine that inadvertently shoots out cocaine. Along with that is a cheerfully deranged Uber driver (Fortune Feimster), and a gun-toting pimp (Jillian Bell) who loves Whole Foods.

Your mileage may vary on this one, because what you see is almost exactly what you get. The film is directed by Josh Gordon and Wil Speck, who are best known for Will Ferrell’s ice-skating comedy Blades of Glory, and an extremely short-lived sitcom starring the Geico cavemen. No, I’m not kidding. As much as these guys are the Olive Garden of directors in that they take nearly zero chances, they have made a film with energy that’s irrepressible and bouncy. Imagine a brain-damaged Golden Retriever, that’s loving, sweet, and isn’t quite smart enough to get through doorways without help. It’s dumb as toast, but dammit, you kinda have to love it in spite of everything.

A good rule of thumb is that the more writers there are on a script, the worse the script actually is. Three writers seems to be the limit of quality. Office Christmas Party had six writers. I repeat, six writers. There’s some good stuff here, don’t get me wrong. But too often, it feels like the filmmakers hired some of the funniest people on the planet, stuck them in front of camera setups, and told them to improvise. The cast is great, but they’re not always synced up and funny in complimentary ways.

We also have some way lazy casting with solid performers. Jason Bateman plays a level-headed dude trying to manage a bunch of lunatics. Jennifer Aniston plays a Horrible Boss. Rob Corddry plays an obnoxious dick. T.J. Miller plays a variation of his Silicon Valley knucklehead. That’s the problem, most of the cast plays variations of characters they’ve played elsewhere. They all show up to play, and there’s a strong sense of warmth in the office. Despite all the ball-busting, the characters like each other. But why not change things up? Imagine Bateman as a hard-partying lunatic, or Olivia Munn as the psychotic HR rep? Choices like that turn a by-the-numbers comedy into something much weirder.

But as good as everyone is, there are a couple of performances that go a little further. Courtney B. Vance is a hugely unappreciated character actor that’s been working forever. He’s a solid professional who never phones in a role. As Walter, he’s a buttoned-up corporate type with a yearning to break free. When he’s finally unleashed, Vance joyfully attacks the movie. Speaking of unleashed, let’s talk about the mighty Kate McKinnon for a moment. With bizarre asides about parrot semen and reporting herself to HR, McKinnon is a wild animal. She’s one of the most exciting voices to come out of the Upright Citizen’s Brigade and SNL. Relentlessly original, she has the potential to become one of the greats. With luck, she’ll harness that potential and make smart choices like Bill Murray, instead of pissing it away with terrible choices like Dan Aykroyd.

Office Christmas Party doesn’t take chances, never swings for the fences, and will be forgotten in six months. But I laughed, a lot, and I walked out of the theater feeling good. That counts for something, and if this office shindig boosts your spirits more than the real thing, so much the better.

Tim Brennan
Tim has been alarmingly enthusiastic about movies ever since childhood. He grew up in Boulder and, foolishly, left Colorado to study Communications in Washington State. Making matters worse, he moved to Connecticut after meeting his too-good-for-him wife. Drawn by the Rockies and a mild climate, he triumphantly returned and settled down back in Boulder County. He's written numerous screenplays, loves hiking, and embarrassed himself in front of Samuel L. Jackson. True story.
Tagged: courtney b. vancefortune feimsterjason batemanjennifer anistonjosh gordonkate mckinnonoffice christmas partyolivia munnt.j. millerwill speck