Home » Blog » Movies » Give These Women a Better Movie!

Give These Women a Better Movie!

As human beings, we’re all about categorization. That’s particularly true when it comes to how we view actors. Denzel Washington does righteousness. Bill Murray does sarcasm. Tom Cruise does focus. While we say we want something new from our film actors, what we often want is something that’s the same that feels new. It’s not fair, but there it is. 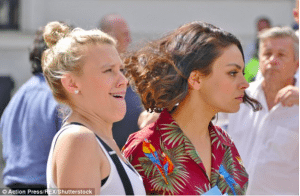 So what happens when an actor isn’t easily categorized? Exhibit A is Mila Kunis. She’s been working steadily for several years, and while she’s mostly done comedy, she has an equal gift for drama. Her best films are probably Ted and Black Swan. Kunis is always good, but she’s never blown up, never been given a role that effectively uses her emotional honesty and understated wit.

Exhibit B is Kate McKinnon. She’s unquestionably the most talented person on Saturday Night Live right now, and she’s appeared in supporting roles in a number of films, including Ghostbusters and Rough Night. McKinnon is a fearless performer, totally unafraid to beam in from whatever planet she originally resided on and throw down some insanity. She’s never inhabited a role that’s equal to her blazing creativity.

When studios seem to be more risk-averse than ever, what are these two actors supposed to do? They do what I would do, which is work whenever possible, build a name for themselves, and try to find the project. It’s a smart move, and I get why they appeared in The Spy Who Dumped Me, as it puts them squarely front and center. They just deserve better.

We’re introduced to Audrey (Mila Kunis), who is not exactly living her best life. She works a job at a Trader Joe’s-type of place in Los Angeles. She’s dropped out of college a lot, and the only thing she’s good at finishing is beer. She met Drew (Justin Theroux), and the potential of a relationship was there for them…until he dumped her by text.*

At least she’s got her best friend and roommate Morgan (Kate McKinnon). Possessed of nearly bulletproof self-confidence, Morgan is one of those people who doesn’t let little things like social mores or good taste stand in her way. 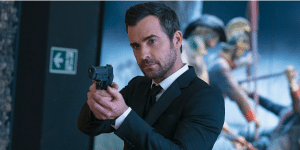 They seem to be settling into a vaguely unsatisfying rut, when Drew reappears. Dramatically. Turns out that he’s actually a covert operative, and he’s on a mission of global importance.**

Drew must safeguard a McGuffin. What precisely is the McGuffin he’s looking after? Audrey and Morgan have no idea, because a group of armed men inconveniently shoot him to death. All they know is that the McGuffin must be in Vienna the next day, and The Fate Of The Free World will be at stake, as it always is.

So off they go on a European adventure. As so often happens with these kinds of things, they are pursued by a gymnastic assassin (Ivanna Sakhno), a hunky MI6 operative Sebastian (Sam Heughan) who may or may not be on their side, and legions of faceless goons who exist to be shot, stabbed, run over, strangled, folded, spindled, and dunked into a fondue pot.

Guys…The Spy Who Dumped Me isn’t great. We have here a late summer R-rated comedy that’s not bad, and does have 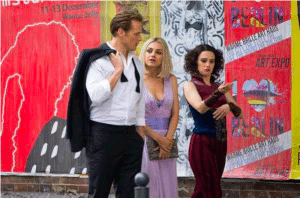 Let’s take a moment to talk about the aforementioned violence first. If you know me or you’ve been reading this column awhile, you know I have zero problem with the red stuff in movies. The trick with violence in film is that it’s all about context. Headshots in John Wick? Fine. There’s blood in the John Wick movies, but it’s a straight ahead action film that rarely lingers on gore. It’s part of the decor, and the result is that it feels okay. A shooting in the film Unforgiven needs to be gory because the theme of that film is the physical and psychological impact of violence. If you factor in humor on top of all that, you have to be an exceptionally skilled filmmaker to balance between laughs and gore. Sam Raimi did it in Evil Dead 2. Edgar Wright did it in Sean of the Dead. Kinji Fukasaku did it in Battle Royale.

With The Spy Who Dumped Me, we have some zany European shenanigans mixed unevenly with some surprisingly strong violence. Director Susanna Fogel has been in TV for a number of years, and this is her first feature. She doesn’t have a strong command of tone, as evidenced by the frequent lurching between gags and gore. More disappointing is that you can see her making clever directorial choices occasionally, such as a funny bit with a sniper trying to target two dumb American women. Was the problem that, as a first time feature director, she had the studio breathing down her neck?

I suppose it’s possible that another pass of the script would have removed some of the issues. It feels like Fogel, along with co-writer David Iserson, are a draft or two away from a strong screenplay. On the one hand, I liked that underneath all the espionage stuff is a strong story about a strong female friendship. Audrey and Morgan support each other, and throughout the story, we see them slowly figure out their respective directions in life. There’s some good character work here. Unfortunately, the spy angle feels half-assed. We have another mysterious thing that people are 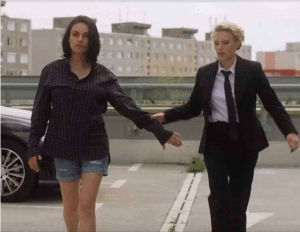 after, and a string of obvious double-crosses. If the emotional aspects, the humor, and the espionage stuff was more evenly balanced, we would have had something rock solid.

Additionally, we have a cast of strong performers who don’t get to make enough of an impact. I rejoiced at seeing Jane Curtin and Paul Reiser appear briefly as Morgan’s kooky parents, and I wanted more of them. Gillian Anderson also appears a little as a flinty MI6 chief, and there’s an undercooked idea of Morgan nursing a serious crush toward her.

Mila Kunis has terrific chemistry with Kate McKinnon, and she’s able to convincingly go goofy, scared, determined, and charming. Her character of Audrey feels underdeveloped, and I kept thinking that she needed a meatier role to dig into. Speaking of undercooked, Kate McKinnon isn’t really playing a character here as much as a collection of weird tics. She’s a thrillingly unpredictable performer, and she has the skill to pull off something special.*** Here, as the superficial Weird Best Friend, her talents feel wasted.

The Spy Who Dumped Me isn’t a bad movie, and if I’m being honest with you, I laughed pretty frequently. More frequently, I squirmed in my seat, frustrated by getting glimmers of something great and having to settle for something that’s only fair. The potential is there for Mila Kunis and Kate McKinnon to be the next great comedy team. This time we got something that’s pretty good. Maybe next time we’ll get something spectacular.

*Is text-dumping as reprehensible as ghosting, or worse? Discuss.

**For a hilarious movie about espionage in which the stakes are incredibly mundane, check out Burn After Reading.

***As I watched McKinnon, I kept thinking of Will Ferrell in Anchorman. That film was a synthesis of surreal and weird humor that played perfectly to Ferrell’s strengths. McKinnon needs a film like that, something that feels like only she could star in it.

Tim Brennan
Tim has been alarmingly enthusiastic about movies ever since childhood. He grew up in Boulder and, foolishly, left Colorado to study Communications in Washington State. Making matters worse, he moved to Connecticut after meeting his too-good-for-him wife. Drawn by the Rockies and a mild climate, he triumphantly returned and settled down back in Boulder County. He's written numerous screenplays, loves hiking, and embarrassed himself in front of Samuel L. Jackson. True story.
Tagged: david isersonivanna sakhnojane curtinjustin therouxkate mckinnonmila kunispaul reisersam heughansusanna fogelthe spy who dumped me