Home » Blog » Movies » For Those in Peril on the Sea

For Those in Peril on the Sea

The worst job I’ve ever held was working in an aluminum factory. I’d gone through a nasty divorce and needed a job immediately. The workers at the local aluminum factory were on strike, and the facility was hiring scabs. You didn’t need to be qualified, or even particularly intelligent. You just needed to be smart enough to not accidentally light yourself on fire. Being in a position of serious financial jeopardy, I immediately jettisoned my principles and crossed the picket line.*

My job didn’t require much in the way of finesse or analysis. It was simple—I’d stand in front of a foundry containing molten aluminum. As you can imagine, it was awfully hot, and the heavy fireproof clothing I wore didn’t exactly cool me down. Using a metal pole called a slag stick, I had to remove slag from the aluminum. I’d work for 15-20 minutes, retreat to the break room to down a Gatorade, and head back into the inferno.

I held that job for about a week, before landing a far cushier gig in an office. That job change was a massive stroke of luck, yet there were others who weren’t so lucky. Their world consisted of tedium. The same work, the same facility, the same people. While I suspect most of the people who worked there were happy to have what appeared to be stable employment, they also must have realized they were in a very specific kind of hell.

When I mention the concept of hell, I don’t necessarily mean flames, horror, and dudes with horns poking people. In his play No Exit, Jean-Paul Sartre wrote about three people banished to The Bad Place. Over time, they come to understand that their punishment doesn’t involve elaborate tortures. It was just them. Together. Forever. That’s where the phrase, “Hell is other people” comes from, and the new film by Robert Eggers, The Lighthouse, takes that concept and positively sprints with it. 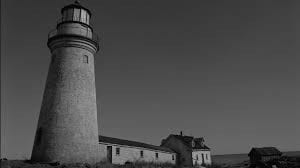 Rather unceremoniously, we’re dropped onto an island at the tail end of the 19th century. The island might be located off the coast of Maine, Cape Cod, who knows? All we know about the island is that it’s a godforsaken rock, upon which a lighthouse has been built. Tending to the lighthouse is a full-time job, one that requires the attention of two men. As the work is both physically and psychologically demanding, teams of two men are cycled in and out every four weeks.

The latest team consists of Thomas (Willem Dafoe) and Ephraim (Robert Pattinson). Thomas is in charge of the place, a crusty older guy laying on the sea captain schtick a little thick. Ephraim is younger and saddled with all of the daily chores. He gets to do all the fun stuff, such as emptying the chamber pots, lugging around massive kerosene containers, and refueling the light itself.

Days pass, bleeding together into endless tedium. It seems that the sun never shines on this island, and Ephraim performs backbreaking labor while Thomas constantly criticizes him over his deficient job performance. Almost forgot—that all happens during the incessant snoring and farting that Ephraim has to endure. The only relief he receives is brief moments of self-gratification and the scrimshaw statue he finds of a mermaid. 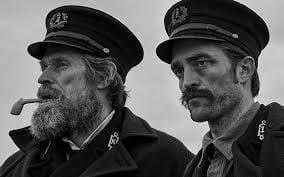 Under no circumstances is Ephraim allowed to enter the top of the lighthouse. That’s Thomas’ domain, and Ephraim’s curiosity is piqued when he spies Thomas at the top of the lighthouse behaving oddly. From there, a seagull begins to torment Ephraim, the men profoundly get on each other’s nerves, and secrets come to light. Then, things get extremely weird.

The Lighthouse is a triumph of filmmaking, though it’s a very, very strange triumph. Director Robert Eggers is fully committed to a highly specific style. Like his previous film The Witch, Eggers has made a highly tactile film where viewers can feel the rough wool of clothing and smell the omnipresent body odor of two men. While he’s very much made a horror movie, Eggers has no interest in jump scares. He’s more interested in creating an atmosphere of paranoia and creeping dread, and his camera constantly reminds us of the insignificance of the men and their island, surrounded by a violent sea. 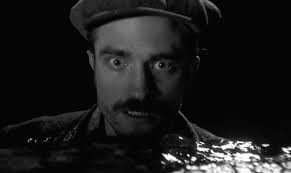 I should take a moment to mention how Eggers has shot The Lighthouse. Without getting needlessly technical, most movies are shot in an aspect ratio of either 1.85:1 or 2.39:1, which refers to the relationship between the width and height of images. That’s why movies and television are usually in a rectangular format. With The Lighthouse, Eggers shot the film in black and white with a 1.19:1 aspect ratio. That means the entire film is placed in a square surrounded by blackness. That decision creates a constant feeling of claustrophobia, in which all of the images are cramped. Eggers has made a daring choice, and I applaud him.

Speaking of daring choices, the screenplay by Eggers and his brother Max Eggers is astounding. It’s not enough that they consulted the journals of Atlantic seafarers of the 1890s to capture the impenetrable jargon of Dafoe’s Thomas. Their script is (extremely loosely) based on the 1801 tragedy of the Smalls Lighthouse, along with the works of writers such as H.P. Lovecraft and Herman Melville. The end result is saturated with signs and portents, questions about madness, hatred, control, and serious horniness. 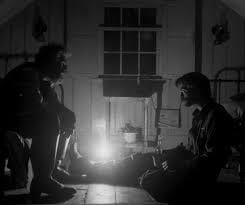 At this point, maybe you’re thinking, “Nah, dawg, this seems like the opposite of fun and I’m giving it a hard pass for date night.” Before you write this film off due to a concern about it being endlessly artsy-fartsy, see it for two of the best performances ever put to film. You’re going to think that Willem Dafoe is just playing the Sea Captain from The Simpsons. Look closer, and you’ll see that under all the “Arr, laddie” stuff is a hypnotic performance. Thomas is more than a hilariously long-winded control freak—he just might be trying to annihilate his partner. Maybe not, though, and Robert Pattinson’s portrayal of the seething Ephraim makes us believe that the younger man is reaching the end of his rope. Immersing himself in a host of bodily fluids and muck, Pattinson delivers a fearless performance of a man drowning in physical, spiritual, and sexual desperation.

Robert Eggers makes films of singular originality. He understands that a nightmare of isolation can come to feel like heaven when another person is added to the mix. The Lighthouse looks and feels unlike anything else that’s out right now, and it’s made with exquisite care and intelligence. Don’t be one of those cinematic cowards who are unwilling to face its briny insanity. I promise that it’s worth your time to take the plunge.

*If I knew then what I know now, would I work as a scab? Probably not.

Tim Brennan
Tim has been alarmingly enthusiastic about movies ever since childhood. He grew up in Boulder and, foolishly, left Colorado to study Communications in Washington State. Making matters worse, he moved to Connecticut after meeting his too-good-for-him wife. Drawn by the Rockies and a mild climate, he triumphantly returned and settled down back in Boulder County. He's written numerous screenplays, loves hiking, and embarrassed himself in front of Samuel L. Jackson. True story.
Tagged: max eggersrobert eggersrobert pattinsonthe lighthousevaleriia karamanwillem dafoe