Five Free Agents That Would Fix the Nuggets

If you are watching the NBA finals, it’s obvious that the Golden State Warriors are the best team in basketball, the Cleveland Cavaliers are a distant second, and the Denver Nuggets are not in the conversation.
The current Nugget squad is talented, young, and well coached. The only problem is that they’re a perennial ninth seed. Beating Golden State seems like a reach, but we don’t have to be the Prom Queen, we simply want to be invited to the dance.
Here are five free agents that could get the Nuggets to the playoffs.

1) The Nuggets need a big-time player and they need him fast. As far as assets go, the Nuggets need to keep Jamaal Murray as their next superstar, and use Nikola Jokic as their focal point for the team. The rest are tradeable. I would start with courting Gordon Hayward. Curry and Durant may be available, but unless they’re avid snowboarders who enjoy our loose marijuana laws, they’re not coming. Hayward would immediately make you a playoff team.

2) Chris Paul. Murray is a catch and shoot guy. He just needs a little space and a guy to get him the ball in the right spot. Paul is going to want a title contender, but only a handful of teams are willing to pay a long-term max contract to a 31-year-old with a history of nagging injuries.

3) I love Jonathon Simmons. He’s a shooting guard, which the Nuggets don’t really need, but he runs the floor, plays D, and is super athletic. The reality is that big name guys are probably not coming to Denver. This guy is the closest thing to an affordable Jimmy Butler.

4) Blake Griffin. In today’s NBA you need to have at least one guy who demands a double team, or at the least, a little help when he’s in the post. No one demands a double team on the Nuggets. With Griffin’s history of injuries and off-the-court issues, his choices may be limited.

5) Simply put, Jamaal Murray is not a point guard and Emmanuel Mudiay just isn’t working out. The 13th pick could be the next point guard of the future, or even a Kobe Bryant or Karl Malone type (both selected with the 13th pick). But if you’re rolling the dice, I’d roll with Patty Mills. He brings the defensive tenacity, leadership, and shooting that the Nuggets lack.

Okay. Maybe the eighth spot means the Warriors sweep us in the first round. Or maybe, just maybe, Jamaal Murray hits a desperation three at the buzzer, and the beer flows heavy in LoDo that night. Then the Warriors beat us four games to one. 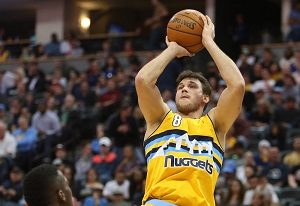 Alan Tapley
Alan Tapley is an educator, author, and blogger who has lived just outside of Boulder for the last twenty years.  His published work includes two novels, two children’s books, a series of cartoons in the Minneapolis Star-Tribune, and multiple sports related articles. His love for family and the state of Colorado is only matched by one thing, his passion for sports.  The first baseball game he ever attended was at Wrigley Field, before there were lights.  At the final Bronco game at the old Mile High, he allegedly cut out a piece of his seat in the South stands.  But regardless of being here for the Avalanche’s last Stanley Cup, the Rockies only World Series appearance, and all the Broncos’ Super Bowl Victories, his wife never fails to remind him that he wasn’t at the University of Colorado in 1990, like she was.  The year the Buffs football team won the National Championship.
Tagged: Blake GriffinCavaliersChris PaulClevelandDenverDenver NuggetsGolden StateGordon HaywardJamaal MurrayJimmy ButlerJonathon SimmonsKevin DurrantKobe BryantNBANBA draftNikola JokicPatty MillsSteph Currywarriors