Why did Mookie throw the trash can? You can see the crowd watching the murder of Radio Raheem at the hands of white cops, their shared looks of horror. Mookie shares the same look, then runs his hands down his face. He’s come to a decision. With deliberate purpose, he walks to a battered trash can, tosses away the lid and the garbage, then lifts up the can.  You can see Mookie break into a run and heave the trash can. It smashes through the window of Sal’s Famous Pizzeria.

The look on his face isn’t one of triumph or exultation. It’s exhaustion.

1989 was the year that put Spike Lee on the map. That summer, he had a hell of a lot of competition at the box office. A third Indiana Jones movie, a second Lethal Weapon, a second Ghostbusters, and Tim Burton’s Batman. You’d think it would be tough for an independent film with a $6 million budget to break through all of that. For anybody other than Spike Lee, it might be impossible.

Do the Right Thing was released on July 21, 1989. White columnist Joe Klein called it “reckless,” and white film critic David Denby wrote that the film, “primes black people to cheer the explosion as an act of revenge.” Lots of white critics thought the film might spark race riots, and not only were they clearly racist, but they also clearly didn’t get the movie. Is it ironic that so-called film experts missed the boat on one of the greatest films ever made, or sadly understandable because so many of those experts were white?

Hold up a moment — have you seen Do the Right Thing? I’ve seen it a ton, and I’ve bought the film three times on three different home video platforms. But we all come to movies at different times. Maybe it’s been a minute since you’ve seen it. Maybe you’ve never seen it. If that’s the case, give it a watch then rejoin me. God, I envy you seeing it for the first time. You’re in for something special. 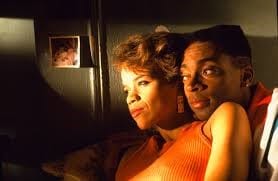 You’re back? Okay, let’s talk. First thing is to set the stage. Here in Colorado, we have some toasty warm days. They’re nothing compared to a hot day on the East Coast; there’s absolutely no comparison. If you want to get close to feeling what it’s like, wait until the hottest part of the day. Get a set of sheets, soak them in hot water, then wrap yourself in them. Then go outside and try to deal with other people. In short, summers on the East Coast suck.

Summer really sucks if you’re in a city, with people living under you, above you, all around you. If you’re in the Brooklyn neighborhood of Bed-Stuy. Da Mayor (Ossie Davis) awakens, soaked in sweat. He’s an older gent who can already feel it’s gonna be a hot one. If he can just get through the day with a beer, or a few beers, and maybe coax a smile out of Mother Sister (Ruby Dee), everything might work out.

Mookie (Spike Lee) also awakens, and he’s got business to attend to. How long has it been since he’s seen his girlfriend Tina (Rosie Perez) or their son? Too long, but he knows if he’s going to move forward, he needs to get paid. He’s a delivery man for Sal’s Famous Pizzeria, and maybe he has a habit of dicking around during deliveries and hanging with friends. Sal (Danny Aiello) is a little annoyed by this, but he lets it slide. His restaurant has fed the people of Bed-Stuy for years, and that pride carries him. His younger son Vito (Richard Edson) likes the restaurant, likes the neighborhood, and likes Mookie. Older brother Pino (John Turturro) couldn’t disagree more. Why can’t the pizzeria be in their own neighborhood, among their own kind? 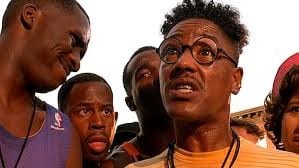 At some point, Radio Raheem (Bill Nunn) and Buggin’ Out (Giancarlo Esposito) awaken into the furnace-like heat. It doesn’t seem to bother Radio much. All he needs to be happy is his giant-ass boom box and his Public Enemy tape.* Everyone can hear him coming due to his habit of playing Fight the Power on repeat. Buggin’ Out, though? He seems like one of those guys who was born pissed off and actively looks for things to be pissed off about. When he walks into Sal’s for a slice of pizza, Buggin’ Out notices pictures of famous Italian Americans on the walls, yet no black people. From there, the tension goes up, and the day keeps getting hotter.

If you only know of Do the Right Thing casually, you can be forgiven for thinking it’s a grim and humorless slog of a movie that fixates on racism and rioting. Very few movies can be looked at as perfect. At age 32, Spike Lee made a film that’s essentially perfect.** Shot in the Bedford-Stuyvesant area of Brooklyn, Lee immediately establishes the neighborhood as a distinctive place with fully realized characters. He takes time to introduce us to the trio of older Black men who spend the day ballbusting, the Korean family who owns the small market, the group of teens trying to find a way to beat the heat. The vignettes are hilarious, wistful, romantic, frustrating, and tragic. Lee’s pacing is masterful, and he knows just when to slow things down to give us a glimpse at the lives of these people, and when to crank up the tension another notch.

Lee has also never quite been appreciated as one of the great American screenwriters. Lesser movies would portray white cops as snarling monsters and the residents of the neighborhood as a collection of saints. Firstly, Lee knows that all of his characters are human. One of the white cops tries to stop the brutalization from happening. Radio Raheem is kind of a selfish jerk for walking into Sal’s with his boom box blaring music. The screenplay gives us the time we need to get to know the characters. It also portrays a host of perspectives that occasionally slam into each other. Should Sal hang pictures of prominent black people in his place? Maybe so, since it would go a long way towards inclusivity? Maybe not, since it’s his place and he should be able to decorate it how he likes? That understanding of perspective is power, and it allows us to grieve at both the loss of a man and the loss of a neighborhood institution.

The performances here are an absolute delight. Watch Bill Nunn’s monologue as Radio Raheem about the battle between love and hate. Watch the sweet scene between Danny Aiello’s Sal and Joie Lee’s Jade, where Sal nurses an unrequited crush on the young woman and can only express it by making her a special slice of pizza. Watch Spike Lee’s Mookie navigate the neighborhood and do his part to get ahead. Watch Samuel L. Jackson as Mister Señor Love Daddy, the radio DJ who acts as a Greek chorus throughout the film. There’s not a single false note, not a single person phoning it in. 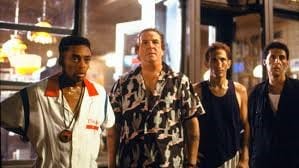 I’ve seen Do the Right Thing many times. I love it, but it’s the kind of love I hold at arm’s length. I can’t explain it, but it feels like such a special and masterful film that it should only be watched sparingly. There are always exceptions. When the news tells me about a black man in Minneapolis who died in police custody, about crowds of peaceful protestors who are tear-gassed, and about a President more concerned with economic numbers and staged photo-ops than human lives, I can hear the call of this film.

So why did Mookie throw the trash can? Did he do the right thing? Was it because he knew the crowd would tear apart Sal and his sons, and he had one chance to redirect their anger? Was it because his hatred of Sal’s pizzeria and what it truly represented was realized at that moment? Was it because he was simply done? It’s one of the great questions in cinema, and the only wrong answer is that it doesn’t matter. It does matter, it’s always mattered, just like Black lives matter. Do the Right Thing tells us that while everything changes, nothing changes. And that’s the triple truth, Ruth.

**Like many male filmmakers, Lee doesn’t have a great track record when it comes to female characters. He objectifies Rosie Perez’s Tina a lot. I suspect Lee would cop to that now. I hope so, anyway.

Tim Brennan
Tim has been alarmingly enthusiastic about movies ever since childhood. He grew up in Boulder and, foolishly, left Colorado to study Communications in Washington State. Making matters worse, he moved to Connecticut after meeting his too-good-for-him wife. Drawn by the Rockies and a mild climate, he triumphantly returned and settled down back in Boulder County. He's written numerous screenplays, loves hiking, and embarrassed himself in front of Samuel L. Jackson. True story.
Tagged: bill nunndanny aiellodo the right thinggiancarlo espositojohn turturroossie davisrosie perezruby deesamuel l jacksonspike lee