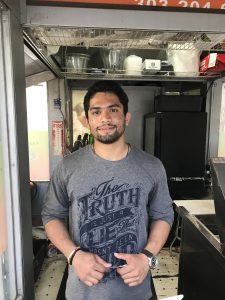 Meet Karthish Ponnakachira, a recent Denver dweller that, only living in Denver for a year, has quickly fallen in love with Colorado. Karthish love for Colorado comes from the surprising similarities, he says, it shares with his hometown Bangalore, India. Being born and raised in Bangalore, the capital of India’s southern Karnataka state which is very mountainous and has a climate resembling Colorado’s (minus the snow), he has always had a passion for outdoor activities. This being one of the reasons Colorado enticed him to move here.

After doing research on different cities around the U.S. to pursue his masters degree in Computer Science, Karthish decided to enroll at University of Colorado Denver and become a Denver inhabitant. He received his bachelors degree back home in Bangalore, but wanted to come to the U.S. to obtain more experience, and to work for a couple years in a computer science job in Denver.

Karthish has grown an immense love for Colorado and is very happy with his decision to move here over a year ago. He is very fond of the mountains and, even though it is his first time experiencing snow since moving here, wants to learn how to snowboard-even after people have told him that it hurts trying to learn.

Cameron Osborn
Cameron is a Colorado native born and raised in Littleton, CO. Growing up in the beautiful landscape of the Colorado area, Cameron developed early on an enthusiasm for photography. After spending many hours skimming through the pages of National Geographic and being enthralled by the photos in it -combined with the old analog cameras his grandpa gave him- he decided to pursue a minor degree in Photography from the University of Colorado Denver. His love for meeting new people and studying different cultures compelled him to obtain a B.A. in Sociology. Weddings, portraits, real estate properties, and automobiles are some things he has photographed throughout his career. Cameron has a huge passion for traveling and, after spending much time in Southeast Asia, has a constant travel itch that always needs some scratching. If you don't see him with a camera in his hand then you most likely will see him with a guitar in his hand (or a big plate of food.) He plans on taking pictures for National Geographic one day, and hopes to always be experiencing new places around the world.
Tagged: BangaloreColoradoDenverFaces of DenverhikingIndiamountainspeople of denverphotographysnowboardingstreet photography