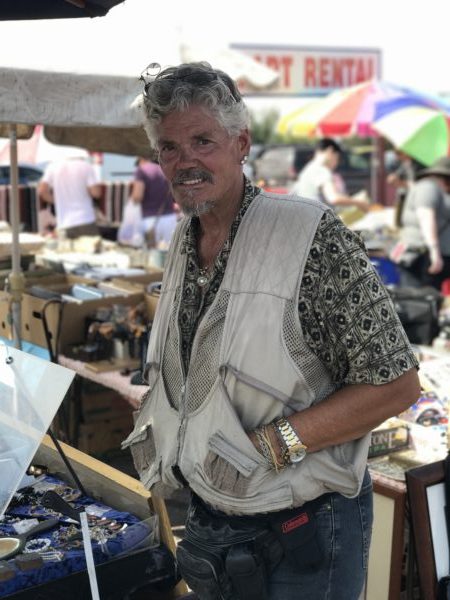 Meet Joseph Newman, an antique vendor swallowed in the sea of hundreds of other vendors at the one and only, Mile High Flea Market. Even though the flea market is home to a vast amount of vendors and sellers, Joseph’s booth sticks out because of his expansive collection of antiques and funky goods.

Joseph was born in Eagle, Michigan and grew up in a household ran by a single mom. One day in the 60’s, his mother decided that she wanted to move out to Colorado (her favorite state), so they packed up their Lincoln Continental and hit the road. His father was a professional wrestler but, after having a mental breakdown, moved to the middle of the woods where he lived in solitary for 20 years. After this stint, Joseph’s father came out of solitude and started a Hebrew church, which Joseph became a member of. One of the best things about being part of the church, Joseph says, was having long hair for over 20 years and not allowing to cut it because of religious beliefs in the Hebrew church. Not only did his father start his own church, but he also was a certified auctioneer; beneficial for Joseph because when he was only 12 years old, he got a taste of the auctioning and antiquing industry. This influence is what propelled him to make a living off of selling antiques, and when he was 20 years old, he went to school and became a certified auctioneer. He says he doesn’t do auctions anymore and is a little rusty at it, but he didn’t hesitate to give me a little verbal auctioning example, which I enjoyed quite much. He has been a part of the antique and auction seen for over 40 years now, and spends most of his time going around to different estate sales and auctions, collecting valuables and selling them at his stall at the Mile High Flea Market. One of the greatest accessories he sports on him is a little magnifying glass attached to his glasses that he can flip down to get a nice thorough inspection of the antiques that he buys.  Joseph also had a long run with being the Resource Director at a homeless foundation called CBM, and he says one of his biggest passions still to this day is helping out the homeless around the Denver area.

Denver has been home to Joseph for over 5o years now and he says he is here to stay until he dies. He says he loves this city, and that his favorite part about it is how he can go anywhere in the city and feel like home because of the numerous people he knows around town. He wants to continue to help the homeless, and says he will never stop collecting antiques.

Cameron Osborn
Cameron is a Colorado native born and raised in Littleton, CO. Growing up in the beautiful landscape of the Colorado area, Cameron developed early on an enthusiasm for photography. After spending many hours skimming through the pages of National Geographic and being enthralled by the photos in it -combined with the old analog cameras his grandpa gave him- he decided to pursue a minor degree in Photography from the University of Colorado Denver. His love for meeting new people and studying different cultures compelled him to obtain a B.A. in Sociology. Weddings, portraits, real estate properties, and automobiles are some things he has photographed throughout his career. Cameron has a huge passion for traveling and, after spending much time in Southeast Asia, has a constant travel itch that always needs some scratching. If you don't see him with a camera in his hand then you most likely will see him with a guitar in his hand (or a big plate of food.) He plans on taking pictures for National Geographic one day, and hopes to always be experiencing new places around the world.
Tagged: antiquesAuctionDenverflea markethomelessMile High Flea Market