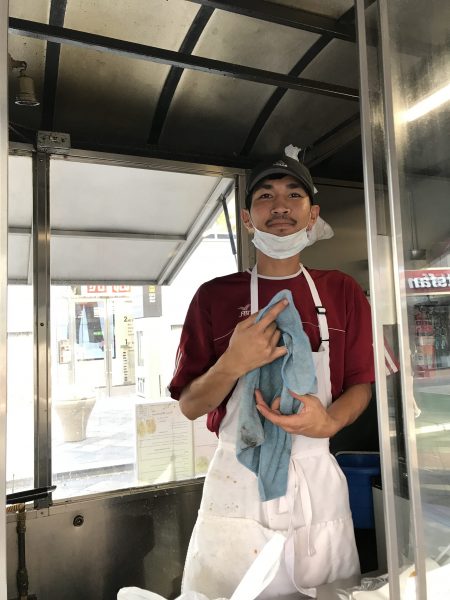 One of the great things about roaming around the urban epicenter of Denver, is the diversity of ethnicities of people you encounter on a daily basis. Jae Pop is a prime example of these multicultural interactions that can be experienced.

When walking up to the family owned Thai food street cart, Liang’s Thai Food (located on the busy corner of 16th and Tremont), I was greeted by an upbeat, ultra-friendly guy, named Jae Pop. He treated me like we had been best friends for years, and for a second, I was almost convinced that we had been best friends for years. But that is the type of thing that comes with the territory of a person from the country where Jae Pop was born, Thailand; a country that is considered to be one of the friendliest countries in the world.

Jae Pop has been living in Denver for 9 years now, but was originally born in Sara Buri, Thailand, a town 1 hour north of Bangkok. He got the opportunity to come to the U.S. from his stepdad being in the military, and moving him out here. Back home, Jae Pop was working in the construction industry to support himself and his little brother. Times were rough, mainly because his mother moved to the U.S. to get a better paying job, and his father had passed away to kidney cancer when Jae Pop was only 5 years old. These circumstances left him and his little brother back in Thailand all by themselves without any parents. But coming from a Buddhist background, Jae Pop kept his head high and his positivity flowing, never allowing himself to have a bad day. He says back home in Thailand was nice because everything was laid back, and he lived a life of enjoyment and little stress. He graduated high school, but was never interested in going to college, saying that he “doesn’t have the attention span to spend his days sitting in a classroom.” He expressed that one of his favorite things to do in Sara Buri was driving around the countryside in his motorcycle with his friends; he wants to do the same in Colorado, but has not been able to get his hands on a motorcycle yet.

Life back home in Thailand was very peaceful, and content, for Jae Pop, but he says he really enjoys being in Denver. He states that his favorite things about being here are the mountains, and the friendly people, which remind him a lot of his hometown. The legalization of weed was never a driving factor for Jae Pop to move here -considering the fact that he moved here 9 years ago- but he says he’s not complaining about it. If you’re looking for a delicious and authentic Thai meal, then go check out Liang’s Thai Food on the corner of 16th and Tremont. The personableness of Jae Pop is a reason in itself to experience it.

Cameron Osborn
Cameron is a Colorado native born and raised in Littleton, CO. Growing up in the beautiful landscape of the Colorado area, Cameron developed early on an enthusiasm for photography. After spending many hours skimming through the pages of National Geographic and being enthralled by the photos in it -combined with the old analog cameras his grandpa gave him- he decided to pursue a minor degree in Photography from the University of Colorado Denver. His love for meeting new people and studying different cultures compelled him to obtain a B.A. in Sociology. Weddings, portraits, real estate properties, and automobiles are some things he has photographed throughout his career. Cameron has a huge passion for traveling and, after spending much time in Southeast Asia, has a constant travel itch that always needs some scratching. If you don't see him with a camera in his hand then you most likely will see him with a guitar in his hand (or a big plate of food.) He plans on taking pictures for National Geographic one day, and hopes to always be experiencing new places around the world.
Tagged: DenverFriendlinessMotorcyclesStreet FoodThai FoodThailand