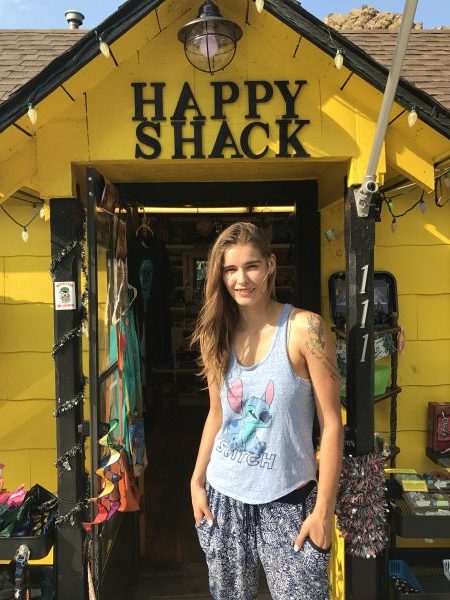 When driving through the quaint town of Morrison, it’s hard to miss the tiny, vibrant, and eccentric building of the little shop called “The Happy Shack.”  After this place caught my attention, I eagerly walked in to check it out, and was met with a giant smile from one of the owners, Ariane Curtis.

Ariane is a Denver native who has lived all her life in  various places throughout Colorado. After graduating from Chatfield High School, she decided to pursue a degree in Design and Technical Graphics from the Art Institute. Her goal was to be able to work on movie sets, and to be able to design sets for films; would even love to work on stop motion films as well. Ariane says that her ultimate goal is to be able to work on the set of a Tim Burton film. She says that one of her biggest influences and motivators for chasing the dream of a set designer is  the movie “The Nightmare Before Christmas,” (which who could blame her.)

The other owner of  “The Happy Shack,” who also happens to be Ariane’s husband, is Justin Curtis. Ariane says that it has always been a dream of Justin’s to be able to open up a head shop that carries gifts and toys, and has a playful vibe to it. The dream became a reality a year and a half ago when he was able to open up the little space in Morrison. The shack used to be the Morrison Public Library back in the ’60s, so it still sports a couple of old bookshelves, and the original fireplace. But the bright yellow color of the exterior of the building is what really catches your attention.

Ariane describes the shop as a friendly and positive space that carries a non-pretentious attitude, and at the same time, can educate others on the weed industry.  She says one of her favorite things is when people come in not knowing anything about the weed culture and products, and when she can drop some knowledge on them and educate them with a positive view. One of the main goals of “The Happy Shack,” they say, is to make you walk away with a smile on your face, and believe me, it does an excellent job at doing that. Their business card declares them as “Your Red Rocks Gift/Rock/Head Shop.” Check them out at 111 Bear Creek Ave. Morrison, CO 80465. Or check out there website happyshackcolorado.com. I might just become a frequent flier to this place, and I would highly recommend you to stop on in.

Cameron Osborn
Cameron is a Colorado native born and raised in Littleton, CO. Growing up in the beautiful landscape of the Colorado area, Cameron developed early on an enthusiasm for photography. After spending many hours skimming through the pages of National Geographic and being enthralled by the photos in it -combined with the old analog cameras his grandpa gave him- he decided to pursue a minor degree in Photography from the University of Colorado Denver. His love for meeting new people and studying different cultures compelled him to obtain a B.A. in Sociology. Weddings, portraits, real estate properties, and automobiles are some things he has photographed throughout his career. Cameron has a huge passion for traveling and, after spending much time in Southeast Asia, has a constant travel itch that always needs some scratching. If you don't see him with a camera in his hand then you most likely will see him with a guitar in his hand (or a big plate of food.) He plans on taking pictures for National Geographic one day, and hopes to always be experiencing new places around the world.
Tagged: gift shophappyhead shopmorrisonPositiveRed Rocks Amphitheaterrockstoys