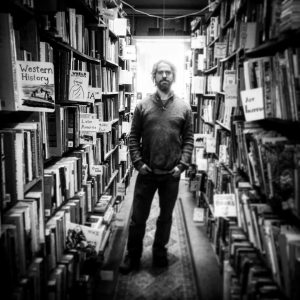 John Kuebler is a familiar face to many in the Capitol hill area of Denver, as the man behind the Kilgore desk. Kilgore Books and Comics has become one of Denver’s most beloved independent bookstores. The store is home to a range of books and comics and will buy used books for cash or store credit.

John moved to Denver about 18 years ago and then to the Capitol Hill area about six years after that. He discovered Kilgore books in 2009, a year after it’s opening. The store reminded him of another one of his favorite spots, Fahrenheit books, due to the size, selection and pricing. Soon he began coming in regularly and talking books with the original owners. This led to grabbing a beer outside of work with them and then eventually a part time job at the front desk. Each of the two original partners planned to move to different cities and decided to sell the shop to John in 2015.

Since becoming the owner, John keeps a small staff at the store. The team includes himself, his son and a couple of part time employees. He also has a hand in the Kilgore Quarterly, which is a not-so-quarterly printed zine of some local artists and writers that grab the attention of the Kilgore group. The zines are up to their 9th edition and contain a mix of comics, stories and interviews. 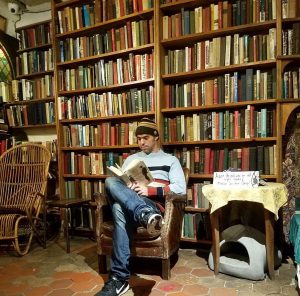 Kilgore has become the stage for budding illustrators and writers in the community to showcase their work.

“The lowlier you are, the more we like you. Not really- but no matter if they sell or don’t sell we always have a place for them, which is legitimizing for local first time and DIY artists.” John said.

Reading and being a book collector is John’s dream job, mainly because at Kilgore he has people bringing in their own work as well as other used books and comics he had never heard of. He is currently excited to feature Karl Krumpholz’s new work, “30 miles of crazy”, which highlights the shenanigans around Colfax Street. Another favorite of his to feature in Kilgore is work by Kelly ShortAndQueer, who helps run the Denver Zine Library and keeps small press in the eye of the Denver community.

This summer John will be attending the Denver Zine Fest on June 24th and planning a 10-year anniversary event for Kilgore Books.

To find out more about John and Kilgore Books you can stop in their store or check out their website at: http://www.kilgorebooks.com/

Helen Kuhn
Helen Kuhn is a writer hailing from the east coast. She moved to Colorado in 2015 to finish getting her Bachelor degree in English at the University of Colorado. Before making the move to Denver she interned with the Daily Camera in Boulder and with Philadelphia Weekly. She spends her times slinging drinks for work and writing poetry for fun. When she isn't writing or messing around on the keys at open mics her passion for beer has led her to finding some of the most delicious breweries around the city. She can't wait to explore more and share her love for Colorado.
Tagged: colfaxDenver zine libraryJohn Kueblerkilgore books