The Denver Film Festival unleashes its craziness all over the mile-high metropolis this fortnight. I had the pleasure of attending the arguably least-film segment of the entire event, but that doesn’t mean it wasn’t worth my time. It definitely was. In fact, you could say it was “worth the wait.”

The event that I’m talking about is “Escape from Godot,” which is just about exactly what it sounds like. The classic, curmudgeonly piece by Samuel Beckett (“Waiting for Godot,” for those who live in the present and don’t waste their time on post-War philosophical struggles) showcases the absurdity and futility of life. Beckett and I barely overlapped our lifespans, but I don’t feel like I missed much in missing him. I remember reading one of his works in my freshman college literature class and thinking that this man managed to be both horribly boring and incoherently absurd. As a person who is required to pay the rent every month, I often wonder how the authors of such absurdity manage to monetize their work. If I turned in to my editor the type of wordsmithing that Beckett committed, I would be promptly dismissed from employment. Beckett, however, is hailed as genius. Perhaps he was, but he wasn’t much fun.

I wanted to “Escape from Godot” for most of my undergrad career and I finally managed to do this week in 46 minutes. If that sounds familiar, then you’ve nailed it!  That’s right: “Escape from Godot” is an escape room trapped in amber on the set of a “Waiting for Godot” production. Unlike the source material, it was a lot of fun.

The production takes place in the annex of the film festival, the McNichols Building in Civic Center Park. The scenario is this: the lawyers for the Beckett estate have discovered the copyright infringement of this production and are on the way to serve their cease-and-desist orders to the troupe. They’ll be here in 60 minutes, and so we need to solve the mystery and finish the play before they arrive, but the stage manager has absconded. We, the audience members, need to figure out several sequential puzzles and call the stage cues in lieu of the manager in order to make sure that the show goes on.

Here’s my thought on escape rooms in general: they feel a lot like my dog must feel when I’m trying to “clicker train” him. For the unfamiliar, this is a system wherein you try to get a dog to do a certain action, and then snap a small device that makes a click sound when he succeeds in pleasing you. The theory is that the dog will eventually figure out that the “click” means that he’s done the action right and start to seek out actions that will prompt you to make the approving click. In practice, it’s mostly the dog charging around randomly, frantically guessing what you might like and rarely getting it right. This training model also depends entirely on your dog giving a shit about your approval, which is an iffy proposition to begin with. My dog just wants to eat goose poop in the park and nap on the couch, clicks or no clicks. This principle, applied to escape rooms, demonstrates with a group of strangers trapped in an enclosed space, frantically trying to figure out answers to the riddles, which seldom include either goose poop or naps. They often include padlocks, word puzzles, boxes of props that must be assembled in a certain order, numeric games, etc. When your unfocused lunges around the space manage to land on a viable solution to the current riddle, another horizon of problem to solve opens up. Solve all of the problems within the designated timeframe and you “win.” The prize is bragging rights and a photo with a sign that says something like “We Won!”

It doesn’t sound like much, but the process is vastly more rewarding than eating goose poop OR napping on the couch. It’s akin to achieving what experts call a “flow state,” where you’re all working in productive tandem with the other people in the group, where you’re all contributing, and the sum is greater than the parts. Speaking as a socially-need primate, this is vastly rewarding and satisfying. I’ve done a couple other escape rooms, as well as other immersive theater events, and this is a glorious combination of the two.

Without including too many spoilers, I’ll give you the best idea that I can of the experience. “The show is the game, and the game is the show.” We are ushered into a theater space, where a sparse set includes the “Godot” classic tree and boulder. We are required to begin solving puzzles. The cast begins the play–and requires us, the audience, to call their cues before the play can continue. The solutions to the puzzles are the cues that need to be called. The one spoiler I will include is that the cues are required to be called in “a terrible Irish accent.” They are not kidding about this. There is not a lot of daylight between my best and worst Irish accents (they both sound a lot like my Russian and Australian accents), but I let fly anyway. I apologize to Ireland in general. Alas. 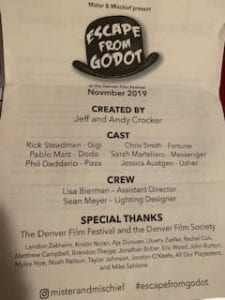 The cast was splendid. I’ll call out in particular that Chris Smith, playing the role of Fortune (“Lucky” in the source material), did a superb job of delivering his lines. Another fun watch was Jessica Austgen, who played the usher. Always one to make sitting in a chair into something worth watching, her portrayal of the usher during intermission (which is always an experience of existential awfulness, Beckett or not) was delightful. Or perhaps I just found the intermission to be existentially delightful. Either way, it was lovely. My one slice of criticism is that the four main characters were all white dudes. I would have loved to see a larger amount of diversity in the casting. It’d be a simple thing to cast a non-white or non-male person in any of these roles. Alas.

My team of unknown people managed to solve the puzzles and finish the play in 46 minutes, which was about equidistant between the record and the maximum allowed time. I’d like to state that the record was achieved by a travelling team of escape-room solvers. Previous to this evening, I had no idea that such things existed. (See: previous query on how to monetize artwork.) While you may not beat the pros at their speedy time record, this is well-worth checking out. Do it: Beckett would approve. I hope.

Jessie Hanson
Jessie Hanson lives and works in Denver and couldn't be happier about it. Like the best-possible kind of Jekyl-and-Hyde scenario, she splits her life between science and storytelling. During the day, she performs clinical diagnostics and messes around with test tubes. At night, she performs behind the mic as a standup comedienne, in the air as a circus aerialist, and in rhinestones as burlesque dancer. She begrudges the hyper-inflated cost of a decent pair of false eyelashes. When she's not on stage, she sweating it out as an endurance athlete in triathlons and marathons across the West. She begrudges the hyper-inflated cost of a decent pair of running shoes. She's thrilled to be on board with OnDenver and writing about science, comedy, circus, athletics, and general fun on the Front Range!
Tagged: escape roomfilm festivalimmersive theater